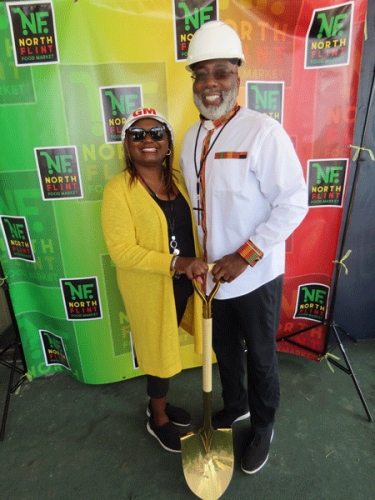 When a cooperative food market opens on Flint, Michigan’s north side several months from now, it will make life easier for residents who’ve had to drive miles away just to get groceries.

The project, which has ties to the Presbyterian Committee on the Self-Development of People, is about more than just convenience, though. It’s about residents having something to truly call their own.

Construction of the $7 million North Flint Food Market is underway on Clio Road, where a former church is being transformed. It will have fresh produce, deli and meat counters, health-and-wellness services and more.

Folks who pay $250 are able to become member-owners with voting rights on store operations as well as how proceeds might be used, such as funding a neighborhood team or project.

“The business model is a food cooperative and so the people who invest in it actually own it, and that’s significant because we’re not seeing that, particularly in urban communities predominantly populated by Blacks and Latinos,” said the Rev. Reginald Flynn, founder and chief executive officer of the North Flint Reinvestment Corporation. “One of the reasons why we established the food co-op is because it will provide us the opportunity to have greater control over our destiny as it relates to food sovereignty but also our economics.”

The market will fill a void in a food desert that resulted from other grocery stores pulling out of the area, which Flynn believes was the result of the Flint Water Crisis in which elevated levels of lead were found in the city’s tap water and children’s bloodstreams.

“A healthier diet mitigates the devastating impact of lead,” Flynn said. “That’s one of the major reasons why we needed to continue pursuing this” co-op project.

Flynn, the longtime pastor of Foss Avenue Baptist Church, and others in the community have been working for years to bring the project to fruition, including doing research and securing funding from various sources. An SDOP grant has assisted with necessities like marketing and advertising.

“That SDOP grant came at an important time,” he said. “It helped us to continue building momentum.”

The project, which has encountered hurdles that have made Flynn want to give up at times, reached a crescendo last August when it was finally time for groundbreaking.

“I got emotional because, you know, you work so hard, and it (the groundbreaking) was packed,” Flynn said. “I drove up and I couldn’t believe how many people were there.”

More than 950 member-owners have been recruited so far, and Flynn is hoping to attract even more.

“Covid has impacted our ability to reach people, but we hope that when the weather clears, we’ll be able to connect with folks that live within a 1- to 2-mile radius of the store and really focus in on them and encourage them to become member-owners, encourage them to shop at the store when it comes (and) to let them know a store is coming.”

Those member-owners include the 17- and 11-year-old sons of General Manager Arlene Wilborn.

“The thing that we’re trying to teach our boys is giving back to the community, and by putting their money into the co-op, it gives them a sense of ownership,” Wilborn said. Also, “they know that they’re helping others have access to healthy foods.”

There also are plans to provide cooking demonstrations, mind-body fitness and timely access to useful resources at the market and event center.

“I know there’s a lot of working moms and dads out there,” Wilborn said. “We’ve got to find a way to make cooking fun and easy and so we want to have demonstrations on how to cook, what to cook. Offering yoga classes is important “because we have to take care of ourselves mentally,” Wilborn said.

Gracious God, giver of every good and perfect gift, thank you for calling us to your service. Help us to be cheerful in using your gifts to us for the common good of others to your glory. Amen.