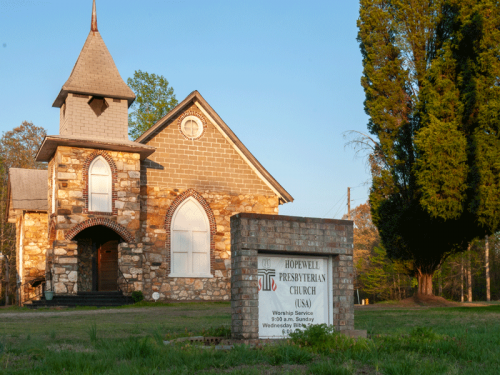 The handsome stone edifice that forms Hopewell Presbyterian Church is a testament to the faith and hard work of skilled Black craftsmen. (Contributed photo)

Just outside of the town of Blacksburg, South Carolina, which is located about 40 miles southwest of Charlotte, North Carolina, sits a church with a unique rock exterior. It sits on a plot of land along Highway 5 across the street from its cemetery. There is perhaps no other church like it in the area, at least none that could match its solid-rock edifice that was built by Black men who left a permanent symbol in honor of God and their place of worship for future generations.

Hopewell Presbyterian Church has been around in some form since the late 1800s. It was first owned by a white congregation and later sold to a Black one in 1890. According to SC Picture Project, a nonprofit that researches historic landmarks in South Carolina, the church burned to the ground shortly after Hopewell was sold to the Black farmers who struggled to make a living for their families on rocky, barren soil near the South Carolina/North Carolina border. They decided to rebuild the church in 1915 and in 1932 remodeled it to include a rock exterior.

How was this done?

Gilbert Howell, 95, is a retired contractor and brick mason from Greensboro, North Carolina. He was raised in the Hopewell community, attended the church, and learned his masonry skills while working on its rock exterior as a young boy turned teenager.

The Black men from this congregation were farmers, carpenters and expert brick masons, or possessed a combination of all three skills. After working on the farm all day, Howell recalled, the men would use their mules to haul the rocks and stones from nearby creek beds back to the church property. Rocks also came from the barren, rocky soil they farmed. Once the stones and rocks had been hauled to the church property, masons cut them so they would fit together and mixed mortar that would hold them into place.

“A lot of brick and stone masons during that era were Black and talented,” Kenneth Edwards wrote on a Facebook page after watching a slideshow on the church’s edifice. The retired bank manager from Gaffney, South Carolina, worked with his contractor/brick mason father, who was perhaps the only Black contractor in Gaffney during the 1960s and ’70s.  Edwards said the skills these Black masons possessed have gone to the graves with them.

It took them 14 years to complete the work, according to the cornerstone that has the names of some of the farmers/masons etched in it.

The masonry work of these Black farmers is a 76-year-old rock-solid testament to and symbol of a congregation’s continued faith in God. Many of the Black men and women who grew up in the Hopewell community and attended the church have moved away.

Many of them have died. But those still living have fond memories of Hopewell and what the church meant to them. Some return every August for Homecoming.

Hopewell has survived floods, tornadoes and hurricanes that sometimes visit Cherokee County, South Carolina. Services are still being held at the church and many members of its current congregation are descendants of farmers who envisioned the church 90 years ago.

Hopewell Presbyterian Church is located at 1473 York Road, Blacksburg. Watch a video here that takes a look at the work that went into constructing the church’s striking stone edifice.

Dr. Kim Smith is an associate professor in the Department of Journalism and Mass Communication at North Carolina A&T State University in Greensboro, North Carolina. His grandparents, father, aunts and uncles were raised in the Hopewell community and attended the church that bears the community’s name. Many of his relatives helped in the construction of the church.

Father, we thank you for calling us to be your hands and feet. We ask you to open our hearts and minds to do your work every day, everywhere, and through everyone that we meet. You have placed us here to do your work and with your help we will gladly obey.