Doing something good in the face of evil

Ohio church accompanist, a native of Ukraine, gathers her countrymen for a benefit concert 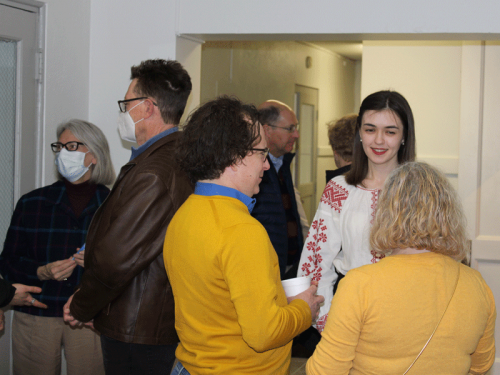 The Rev. Brad Sheppard, pastor of Immanuel Presbyterian Church in Cincinnati, received an email one Sunday from the church’s accompanist, Diana Chubak, a doctoral student at the University of Cincinnati College-Conservatory of Music. Earlier that day, Sheppard had asked Chubak to suggest organizations to support in the wake of the Russian invasion of her native Ukraine.

In his reply to Chubak, Sheppard suggested to her the idea of a benefit concert to raise money for Ukraine. What he didn’t know is that she was already entertaining the idea. She quickly replied as much, and that holding the benefit concert at the church “would be great.”

On March 13, more than 125 people gathered in the church’s sanctuary in support of the three Ukrainian student musicians and to raise money for two organizations: a Ukrainian foundation and Presbyterian Disaster Assistance.

One student played an original composition. The music was moving, and the event not only raised $3,000 but also gave the community an opportunity to show their support to the students and their homeland.

The benefit concert also initiated conversations with other congregations in the region who would like to hold a benefit concert featuring the students, including Cincinnati’s Hyde Park Community United Methodist Church and Covenant Presbyterian Church in Springfield, Ohio.

“In the midst of devastation, the concert provided an opportunity to celebrate the beauty of music and in the face of evil to do some good,” Sheppard said. “Of course, the money raised will be helpful. But as important was the experience of the concert itself and the opportunity to show the students support.”

“Andrii [Isakov], Maksym [Mahlay] and I are extremely grateful to Immanuel Presbyterian Church and its pastor, Brad Sheppard, for helping us organize a benefit concert for Ukraine,” Chubak said. “We were truly touched by how many people came to stand with us, our fellow Ukrainians and our homeland. We gathered together in unity for peace in Ukraine and against the Russian war.”

“These Americans showed their support by not only attending the concert but donating to organizations that are providing emergency assistance to our army and refugees,” Chubak said. “It was meaningful to share with this audience a small piece of our rich Ukrainian culture in the form of music by Ukrainian composers. United we stand and together we will win!”

Dear God, please bless the witness and ministry of the Presbyterian churches. May others see in them your grace and love and be drawn to know you in your Son, our Lord and Savior, Jesus Christ. We ask it in his name. Amen.