From a train station to a storefront theater to home 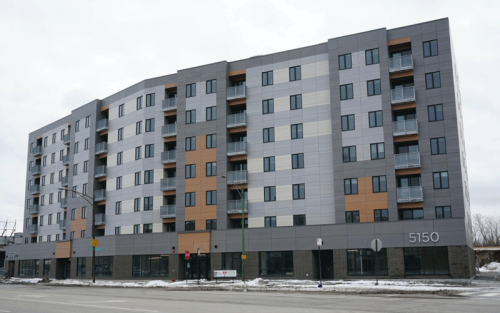 Like some of its neighbors in Northwest Chicago, Friendship Presbyterian Church knows what it’s like to be on the move and without a home.

Over the past decade, the congregation has worshiped at a train station and a storefront theater.

Now it’s about to move into a new home, Friendship Community Place, as tenant, on the first floor of a new affordable housing project.

Managed and owned by Full Circle Communities, 5150 — named after its address on Northwest Highway — is a 75-unit mixed-income housing community for veterans, people with disabilities, seniors and families.

To help their new neighbors moving in last weekend, members and friends of Friendship Church welcomed them to the neighborhood with household, hygiene, and other move-in items at a temporary pop-up pantry.

It’s an example of how the congregation plans to use its multipurpose space for worship, but also to offer it up for community gatherings, training opportunities and other programs for residents and members of the community.

“I’ve never seen a group of people like this,” says Friendship’s pastor, the Rev. Shawna Bowman.

More than decade ago, Friendship formed when two Presbyterian Church (U.S.A.) congregations sold their buildings. The two churches had dwindling attendance and were disconnected from their neighborhood. Wanting to do something new, the congregations merged and leased space at the Norwood Park train station in Chicago for worship — right in the heart of their community.

Bowman focused on Friendship’s desire to become a source of hope and healing for the neighborhood — and on dreaming about what might come next.

As members and friends formed relationships with people in their community, they began to see the systemic impacts of poverty, segregation and racism on their new friends and across the city.

In n 2014, a Black teenager, Laquan McDonald, was killed.  He was shot 16 times by a Chicago police officer, who was convicted of second-degree murder in 2018. Sentenced to nearly seven years of prison, Jason Van Dyke is now free after serving less than half of his sentence.

After the 2014 shooting, Friendship helped form the Northwest Side Coalition Against Racism & Hate, and Bowman began to increase work around activism.

Five days after the 2018 verdict was handed down, the NWS Coalition joined in vigils across the city, including at the train station of Friendship Church.  As people grieved with the family and called for more police accountability and systemic changes in the criminal justice system, they were met by pro-police protestors.

“It was scary. We received threats,” Bowman said. “Within a month we were evicted from the train station.”

Officially, the congregation was told that the train station board wanted to rent the space for other events.

Seeing the face of racism made the congregation even more resilient. They found worship space through a partnership with The Gift, a storefront theater. During this time, Friendship began to advocate for an affordable housing building in the neighborhood.

When the idea was first proposed to build 5150 in their neighborhood, hundreds came out in opposition. According to media reports, much of the debate was racially charged.

Amid the rancor surrounding racism and poverty, Bowman helped form Neighbors for Affordable Housing, organizing and helping people to understand how desperately affordable housing was needed in their community.

“At first, a large number of neighbors didn’t want it,” Bowman said. “So, there was a lot of education we did in the community.”

But the congregation decided together that it was worth the risk of opposition to build on the partnership — and draw on their invested resources to do so.

“It’s nothing short of a miracle and the hard work of local organizers that this is finally happening,” Bowman said.  “The intangible is finally becoming tangible.”

Through the power of your Holy Spirit, loving God, may the ministries we offer in the name of our Christ lead to the transformation of our world, our churches and ourselves. Amen.