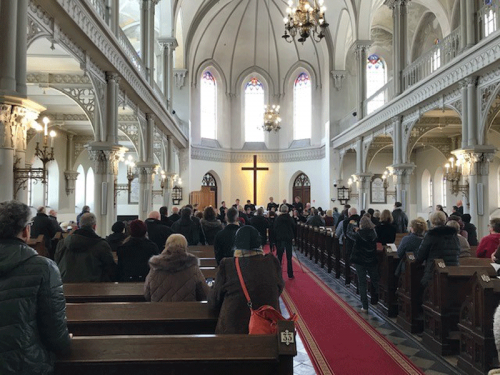 Ellen Smith, World Mission’s regional liaison for Eastern Europe, recently returned from a visit with partners in Germany, the Czech Republic and Poland to see firsthand how they are coping with the enormous task of caring for refugees fleeing Ukraine and how the Presbyterian Church (U.S.A.) can accompany them.

“What I saw was heart-wrenching, but also filled me with hope,” she said. “I saw ordinary people doing extraordinary things. They were completely overwhelmed, but receiving people with open hearts, compassion and love. No one had an abundance of resources, but they were focused on what they could do by working together.”

After landing in Berlin, she took a train to Bonn, Germany where she met with an Orthodox theologian from Minsk. The theologian is living in Germany while finishing her doctoral degree and spoke last year to the BURM (Belarus Ukraine Russia Poland) Mission Network about the ongoing unrest in Belarus. Smith said she is part of a network of people working together to help Ukrainians in exile. With her extensive contacts, she was able to give Smith a true picture of what is happening on the ground.

The theologian is one of several involved in reconciliation and peacemaking in Ukraine, people who are “deeply wise, deeply compassionate.” She said even though the war has caused them to scatter, they continue to stay in touch and look for ways to help.

Smith said she was impressed with the way Germans are handling the large influx of refugees.

“The Germans are receiving people with compassion,” said Smith. “They’re very organized, and that’s wonderful. And they’re very protective. There were signs in Russian and Ukrainian everywhere. They were doing a great job, but they’re overwhelmed.”

Deutsche Bahn, the German train system, is offering free tickets to Ukrainians for any destination in Germany they choose.

Smith, who lived with her family in Russia for a decade, worries about friends who are part of the Moscow patriarchy in Ukraine because they think of themselves as the Ukrainian Orthodox Church under the Moscow Patriarchy, not as Russian Orthodox. She said they are the subject of hate now due to association.

“It’s sad because their metropolitan came out more boldly than anyone against the war and called on Russia to withdraw. “I don’t know if there will ever be enough forgiveness. They are just under the patriarchy. It’s just so painful for me, personally, because there are people I care about in that church and in other churches.” 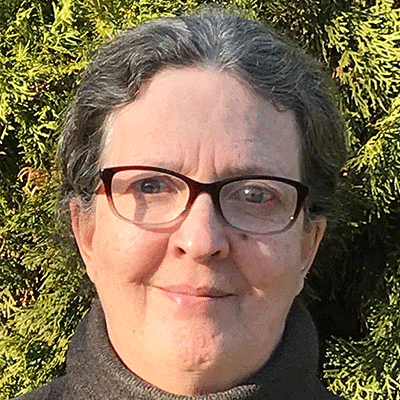 In Prague, Smith met with members of the Evangelical Church of the Czech Brethren, a PC(USA) global partner. Although small in area, the Czech Republic has received 300,000 refugees. By dispersing refugees into smaller places, they have been able to provide emergency shelter, but realize it’s only a temporary solution. They have begun thinking ahead to long-term shelter solutions, realizing there is no end in sight for the conflict.

“The refugees are women and children and the elderly, a very vulnerable group,” said Smith. “They realize it is important to take good care of them and protect them. Often, the refugees are confused, and not sure what to do. The men have stayed behind to fight.”

Smith met a young volunteer in charge of fundraising for ECCB who spearheaded a special fund drive to buy toys and games to keep children occupied while their parents are being registered. They often have to wait in line for hours. They also had to find 400 volunteers, far beyond ECCB’s capacity, so they reached out to every church and civic organization all over the country, and they got the 400 volunteers and a huge number of needed emergency supplies.

“The sensitivity of the people I met for these refugees and watching them and caring for them and understanding their needs was just really impressive,” said Smith. “They were phenomenal.”

Smith said these churches are small without a lot of capacity, but they have been creative about finding ways to help. One church that previously operated a day care has opened its doors to educate Ukrainian children. Churches around the country have opened their doors to refugees and church members are taking refugees into their homes.

Today we pray for all those who have been forced to leave their homes, their homelands and all they hold dear that you may grant them safe passage, wisdom and courage. And we pray for host communities around the world to have open hearts and eyes to see God’s servants in the faces of those seeking refuge. In the name of our Lord and Redeemer, Jesus Christ. Amen.