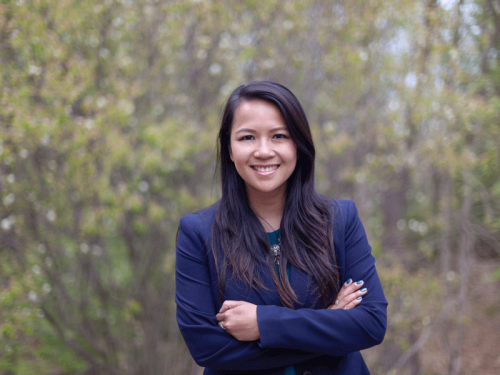 More than 300 people attended the recent Together We Welcome conference put on by Church World Service, which counted the Presbyterian Church (U.S.A.) as a sustaining sponsor of the online conference.

State Rep. Tram Nguyen of Massachusetts, the first Vietnamese American woman to be elected in the Commonwealth, opened the conference on a high note just by telling her own immigrant story.

“What you’re doing is so invaluable,” helping refugees, asylum seekers and other displaced people to find a home, a job and “security in a very insecure world,” Nguyen said during her mainstage address. “As a former refugee I know how scary it is. … It’s heartening to see people organized to help refugees.”

As a 5-year-old, Nguyen, her two sisters and their parents came to the U.S. with “less than $100 to our name, but we had a lot of help.” The family secured public housing in Lawrence, Massachusetts, and Nguyen was placed in first grade. Her parents worked two or three jobs while attending English-language classes. “The journey has not always been easy,” Nguyen said.

After high school she completed a degree majoring in American Studies and sociology at Tufts University, then went on to the Northeastern University School of Law, where she earned a Juris Doctor degree, passed the bar exam and went to work at Greater Boston Legal Services as a legal aid attorney.

In 2018 she was elected to the Massachusetts House of Representatives. Her motivating factor was the representative who served her district at the time. One of his legislative goals, she said, was to allow Massachusetts police “to stop anyone who looks illegal. He wanted to legalize racial profiling, and I couldn’t allow that to happen. As an Asian American woman, I have had experience of people treating me as ‘other,’ but this guy wanted to codify that into law. I was honored to be elected.”

“Representation matters,” Nguyen said. “It’s not a buzzword. It provides communities with leaders who understand their communities. Children and adults deserve to see leaders who look like them.”

Just two weeks earlier, Nguyen was visiting a school where she read to students. When she was done, she spied two students who were hanging back. After she introduced herself, one child told her, “I’m Vietnamese, too, and I have never seen anybody who looks like you.”

“We don’t have many new immigrants in elected office. I’m glad to be able to work with you all to increase representation and give you an example of what we can do,” Nguyen said. “We are as much a part of the community as those whose ancestors came over on the Mayflower.”

For people who are hopeless, the U.S. remains “a land of opportunity and a beacon of hope,” Nguyen said. “Wave after wave of refugees have come, building the country into what it is today.”

Welcoming people requires more than just saying hello and smiling, she said. “It’s incumbent to create a safe space for everyone. … Welcoming means we put out a call for furniture so children can sleep on a bed and eat at a table.”

It also requires offering English-language classes and securing housing until the new residents can find work, she said. “These are social programs, not handouts. They are pathways to success,” because “after [immigrants] are successful, they give back to the community tenfold, fiftyfold, a hundredfold. The entire community benefits from this and is enriched by diverse new members. We’re all better for it.”

Rick Santos, president and CEO of Church World Service, noted that six of nine resettlement agencies in the U.S. are faith-based or faith-founded.

“The principle of welcome is a constant across faith traditions,” Santos said. “We serve as ambassadors and bridge-builders to new arrivals. When they step off a plane or a bus, often it’s members of a faith community who are there to greet them, and they help their refugee and migrant neighbors navigate their new community.”

Today’s Focus: Together We Welcome conference

Bless, O Lord, our witness to your world. May our words and deeds speak to your whole creation in all of its wonderful diversity. Amen.