Café Justo offers an entrée to mission partnership and hope 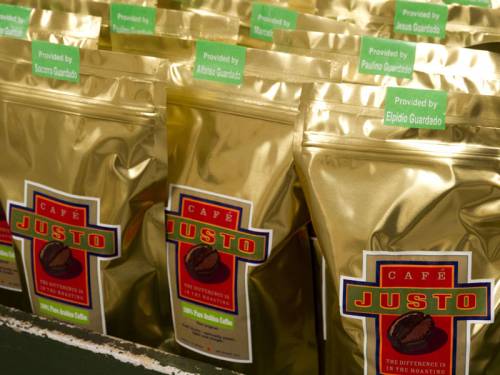 Each package of Café Justo contains the name of the farmer who grew the beans.

Coffee is a major agricultural product of Mexico, the beverage of choice among millions of people in the U.S., and a link in a mission partnership that transforms people in both countries.

Café Justo (Just Coffee) is produced by a fair-trade cooperative that is affiliated with Frontera de Cristo, a Presbyterian border ministry. Frontera de Cristo is located in the neighboring cities of Agua Prieta, Mexico, and Douglas, Arizona, and is governed by a board composed of an equal number of people from the U.S. and Mexico.

Café Justo begins in southern Mexico, where coffee growers receive a fair price for their beans. The beans are shipped to Agua Prieta, where the workers who roast, grind and package the coffee for shipment are paid a living wage and receive health care, retirement and other benefits. Among the most loyal customers are U.S. Presbyterians, who support the goals of fair trade and enjoy the rich taste of Café Justo.

Mission co-worker Mark Adams has been involved with Café Justo since its beginning in 2002. Mark is Frontera de Cristo’s U.S. coordinator.

Mark and his wife, Miriam Maldonado Escobar, who is also a mission co-worker, have focused much of their energy on addressing the root causes of migration. One of those causes is poverty, and Café Justo’s model helps people avoid poverty. In addition to receiving a fair price for their beans, the farmers own the roastery and compensate the workers justly. Farmers and roastery employees can afford to remain in Mexico with their families rather than endure a risky trip to the U.S. to find a job.

Frontera de Cristo, in partnership with Café Justo and CRREDA, a drug rehabilitation ministry, recently opened Café Justoy Mas, a coffeehouse in Agua Prieta. It has created additional jobs, but its primary purpose is to give the city’s young people a safe place to enjoy themselves. In addition to coffee and pastries, Café Justo offers movies, games and other opportunities for fun and enrichment. Young people also can take advantage of its drug education and prevention services. Having a place of belonging makes them less vulnerable to entreaties from the drug cartels, which are a powerful force in Agua Prieta.

Beyond his ministry at the border, Adams advocates for the reform of our country’s immigration laws. He testified before the U.S. House of Representatives Subcommittee on Border and Maritime Security in 2016, supporting legislation that would allow for the safe and orderly flow of people across borders. He works alongside the Presbyterian Office of Public Witness in backing this stance, which reflects the position of our church’s General Assembly on immigration.

In all its pursuits, Frontera de Cristo is about bringing people together across barriers of language, social class, ethnicity and nationality. When U.S. Presbyterians visit Frontera de Cristo on mission trips, the emphasis is on transcending these barriers through relationship building, joint worship and working together in ongoing community ministries.

“Christ has already broken down the barriers,” Adams says. “It is up to us to live into that reality.”

Creator God, we give thanks for opportunities to embrace the diversities among humankind. May this collaboration be a place where the community finds your unconditional love. Let their light shine with your grace. Amen.