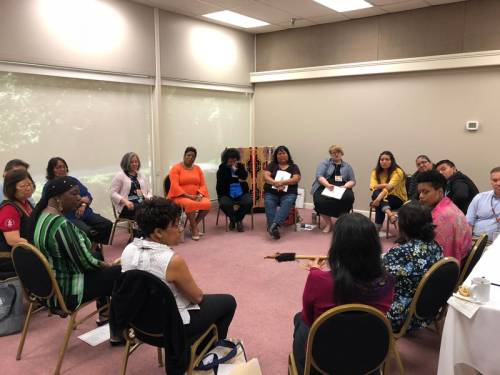 Native American women came together in Louisville over the summer for a pre-gathering event prior to the kickoff of the 2018 Churchwide Gathering of Presbyterian Women (PW). “Because of limited opportunity to come together nationally, Racial Equity & Women’s Intercultural Ministries (RE&WIM) put together this event,” said Irv Porter, associate for Native American Intercultural Congregational Support. “This is also a time to celebrate together the goodness of God in the lives of native women,” added Rhashell Hunter, director of RE&WIM.

The event began with a Native American tradition of acknowledging whose land the group was meeting on and a welcome from indigenous people currently living on the land. As the women began sharing in the circle, one topic that quickly became a focus of the conversation was the Presbyterian Church (U.S.A.)’s apology to indigenous people and the Doctrine of Discovery.

To bring about reconciliation with native people, some presbyteries are reaching out to Native Presbyterian congregations to apologize. While the apology from the PC(USA) is critically important, some asked, is it enough? “There is still healing to be done,” said Danelle Crawford McKinney, a teaching elder in Dakota Presbytery. Her great-grandfather was one of the first Native Presbyterian ministers in the Dakota Presbytery. She is a student rights specialist at Haskell Indian Nations University in Lawrence, Kansas, and an enrolled member of the Sisseton-Wahpeton Oyate tribe.

Crawford McKinney said that because of the lack of ability to communicate with all of the native churches, some congregations have not had the time to process the concept of the Doctrine of Discovery. “Native churches need to provide leadership that allows a place and a voice for the natives to express their anger about the atrocities of the church against Native American people by the church,” she said. “I want to make sure my children and grandchildren are proud of their Reformed tradition amidst the wisdom of their culture.” McKinney said she was taught that you don’t mix your culture with your Reformed way; that was the teaching of the church, “but that’s not what God wanted,” she added.

Norma McCabe, another participant in the circle, said it is very challenging to explain the Doctrine of Discovery to a group of people driven off their land and are not exposed to anything other than life on the reservation.

Another topic of importance in the circle discussion was the need for groups to self-identify. Participants reiterated the 223rd General Assembly (2018) action that supported the importance of people of color naming themselves rather than being named by others. Madison McKinney, a student at Haskell Indian Nations University, said she was offended when the term “Indian” was used to describe her people. “Indian comes with stigmas and that’s not who we are,” she said. “‘Native American’ or ‘indigenous’ sheds more light on our culture. As a young spiritual person, I think it is necessary for people to recognize this for the church to move forward and connect with native people.”

“To move forward, the PC(USA) must listen to native people,” said Crawford McKinney. “The recommendations were good. But there must be more. Native leadership is going to have to take the reins to be supportive to the 95 native congregations who need to work through their pain. They also need to see non-natives present in their lives to remind them that we can trust others.” She said this is not something the church can do for native people, but rather with them.

Dear God, thank you for raising up prophets in our midst to bring us good news. Accompany them in their journeys and strengthen their ministries. Through Jesus Christ our Lord. Amen.