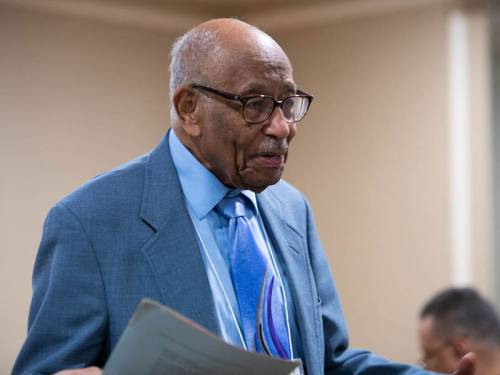 The Rev. Dr. James Reese, now approaching the 70th anniversary of his ordination in the Presbyterian Church, believes learning about stewardship is a cross-cultural exercise. He asserts that approaches to charitable giving, especially in the context of the church, are formed by a community ethos — and he has the data to back it up.

Presenting the workshop titled “Stewardship in Racial-Ethnic Communities” at the 2018 Stewardship Kaleidoscope conference in St. Louis, Reese brought his decades of experience to help answer questions of what really happens inside racial-ethnic communities to motivate and drive generosity. Reese is Minister of Specialized Interpretation at the Presbyterian Foundation.

Opening his time with a recitation of Psalm 133, Reese reminded attendees “the image of our community being good motivates us.” And the understanding of “good” within each setting is what helps to define the way groups respond to requests for giving.

Reese has been a student, practitioner and advocate of racial-ethnic diversity within the Presbyterian Church since he began ministry.

Through the 1960s, he saw a twofold increase in the number of racial-ethnic people who became candidates for ordained ministry in the Presbyterian Church. During the work of reunion in the late 1970s and early 1980s, Reese worked to ensure concern for racial equity was included in the articles of reunion.

“We needed to fight against the ‘invisibility’ of cultures, given the small number of the population,” he says of the Presbyterian denominations’ racial composition at the time. “We were most concerned about how to avoid micro-inequities — like sitting in a meeting and nobody saying something to you. The more we know across cross-cultural lines, the better we are, and religious beliefs often help in coping and understanding.”

Reese acknowledged the Presbyterian Church (U.S.A.) goal, set at the 1996 General Assembly, of having 20 percent of its members be non-Caucasian by 2020. As of the end of 2017, that number was 9 percent.

Looking at giving trends, Reese first called attention to Korean Presbyterians, who give at almost twice the percentage of all other Presbyterians. “We sent missionaries who told them tithing was important, it was in the Bible, and they took it to heart.”

Reese said that Caucasian givers across mainline denominations give approximately 3.5 percent of their income.

African-Americans, he said, see giving as a spiritual discipline that derives from a strong sense of “paying it forward” and doing good in the community as a source of support. The most recent per capita data shows African-Americans give 3.8 percent.

Loyalty is a key motivator for stewardship in Asian communities, as exemplified by a statement made by C.W. Choi regarding the Korean perspective. Stewardship is not merely the act of fundraising, said Choi, “it is about trust, faithfulness and discipleship.” The most recent per capita data shows all Asian groups give 6 percent. As a subset, Koreans give 8 percent.

In Latino populations, Reese posited the ethics of community and shared interest — such as helping family and neighbors with immediate needs — are primary motivators in stewardship. Giving preserves the unity of close kinships and allows those with resources to give back in consideration of others who are in need. The most recent per capita data shows Latino churchgoers give 3.8 percent.

For Native American congregations, Reese holds that the culture of giving is based in a sense of reciprocity, mutual exchange and respect for the giver. Since communal ownership of land and resources is a common perspective, generosity is seen by many in this population as a way to strengthen and preserve the community. No data was available for Native American per capita giving.

One of Reese’s key findings is, “If you come to church, you’re more likely to give. Maybe we should focus our stewardship efforts on church attendance — because if people come to church, it’s likely they will give.”

Concluding his presentation, Reese encouraged participants to learn about different racial-ethic groups’ approach to stewardship, saying the kernels of truth found in each attitude may influence how they approach giving in their contexts.

Gregg Brekke, for the Presbyterian Foundation