Senior sings birthday greetings to all

Man lives into the joy of God’s ‘call’ 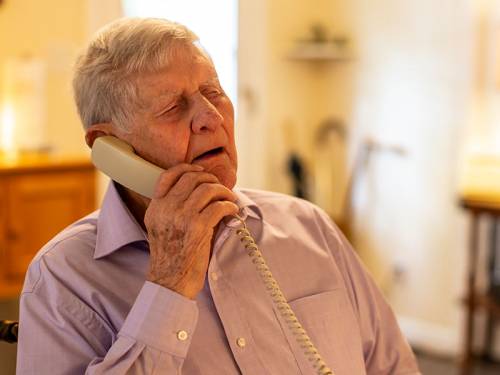 Carl Webb’s voice was heard for many years on the radio. He now blesses others over the phone with a unique ministry that makes those at Westminster Presbyterian Church feel connected and loved. Khadejeh Nikouyeh/News & Record

It’s your birthday. The phone rings. While it could be a family member or a friend wishing you well on your special day, the last thing you might expect to hear is a 99-year-old man on the other end of the call singing “Happy Birthday” to you.

But that’s exactly what happens to those who attend Westminster Presbyterian Church in Greensboro, North Carolina, where Carl Webb has found his purpose, his “call” so to speak, in serving God. And that “call” is to be the birthday crooner of the church.

In all of the 18 years of this unique ministry, Webb has had only five days off. And that’s only because on those days he didn’t have anyone to sing “Happy Birthday” to, he says. Webb has also kept track of the number of calls he has made over the years.

He’s found himself on the cover of the Sunday edition of the Greensboro News & Record, and NBC Nightly News — with viewership in the millions — featured him recently on one of its segments.

Webb moved to Greensboro after his wife of 54 years, Connie, passed away in 1996. They were from Eden, North Carolina, where he once worked for a radio station.

“I was the voice of ‘the wonderful land of Eden, WLOE,’ ” Webb said, repeating the station’s tagline from back in the day.

Webb was also a renowned soloist, using his God-given gift of song for all of Eden.

“He was the famous wedding and funeral person,” said his daughter Betsy Hyslop, who recently retired as the director of music ministries at Westminster Presbyterian.

Webb now lives with Hyslop in her family’s basement. When he started going to church with her, he noticed church secretaries taking a sheet of paper from a packet on one of the church’s walls.

“What is that, Betsy?” he inquired. His daughter replied that it was a list of birthdays for the month — for all of the people who went to church. 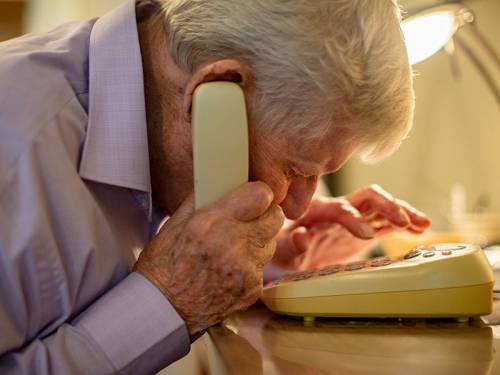 Carl Webb proves you are never too old to serve god. The 99-year-old has a “happy birthday” ministry, in which he dials church members and nonmembers alike and sings to them on their special day. Khadejeh Nikouyeh/News & Record

He asked for a copy of the birthday list, and the “Birthday Man” was born.

At first, though, Hyslop was worried — and not because her father couldn’t sing. He’d been doing that in public since he was a child, and his voice was still fine. She was worried because she just wasn’t sure how people would respond to getting a call from someone they might not know. Sure enough, one day, a woman from the church called Webb.

“Somebody from this number called my boy and sang ‘Happy Birthday.’ Who was it?” she asked.

“She was a little taken aback,” said Hyslop.

Shortly thereafter, a pulpit announcement was made in the church, sharing the exciting new “Happy Birthday” ministry of Webb’s.

The birthday singing is a blessing, though, for Webb as well as those in the congregation.

“He couldn’t walk and see as well as he once did,” said Hyslop. “He was trying to find something he could do for the church.”

Once people in the church knew who was singing — and why — word spread beyond the church family. Even people Hyslop didn’t know tried to get on her father’s “Happy Birthday” singing list. Hyslop’s children also called, asking if “Papa” could add another friend’s name to his list.

“He was even trying to get names from the dentist office. I had to put a stop to it,” she said, laughing.

On Webb’s 99th birthday this past May, Westminster Presbyterian Church did something special for the famous birthday man: The entire congregation sang “Happy Birthday” to him. The song was followed with a standing ovation and thunderous clapping.

“It was a great joy to know people remembered me on my birthday, in the same way that I remember them,” Webb said, adding that he plans to sing until he can’t breathe anymore.

We thank you, O God, that nothing can separate us from your great love. We thank you for knitting us together not on the basis of bricks and mortar but through the blood, sweat and tears of Jesus Christ. Keep us faithful and let us not grow weary in doing good. In Jesus’ name. Amen.