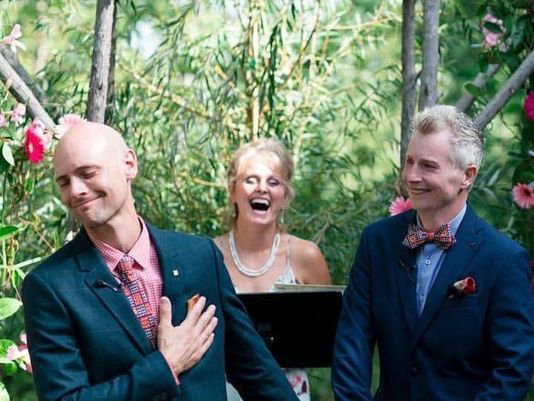 The 150-year-old Presbyterian Church at Tenafly is notable for its star power.

Many of its members and cantors who lead hymns or participate in services have performed on Broadway, off-Broadway or with the New York City Opera.

All of that musical talent of the northern New Jersey church joined forces earlier this year to help Jerad Bortz, a veteran of Wicked who was left paralyzed from the chest down when he and his husband, songwriter Steven Skeels, were involved in a car accident on Feb. 4.

The church raised money to help the pair by holding a benefit concert featuring cast members of Wicked, The Lion King and other Broadway shows.

Bortz and Skeels became well-known to members of the church over a decade ago, when the couple volunteered for a church benefit concert to aid Haiti after it was devastated by an earthquake. The couple subsequently participated in other church events to help the needy.

Church members were distraught when they heard about the terrible accident and were moved to action, church leaders said.

“Jared and Steven have always brought to us a joyful and loving spirit full of hope. That spirit has provided great energy for our work on behalf of those in need,” said the Rev. Eileen Lindner of the Presbyterian Church at Tenafly. “Now we hope to buoy them up with the same joyful and loving response as they move into this next unfamiliar chapter of life.” 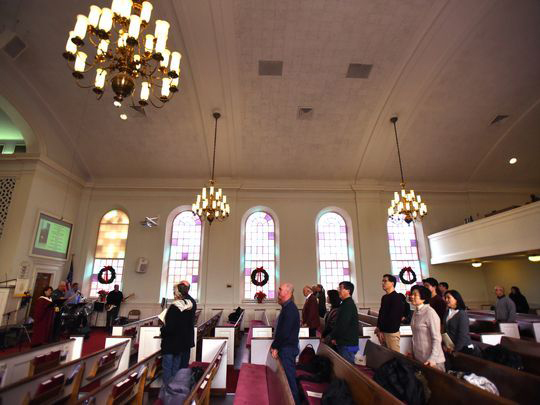 The congregation sing during Sunday service, photographed at Presbyterian Church of Tenafly in Tenafly on Jan 8th, 2017. The congregation has many members who perform on stage in New York City. It will host a benefit for Broadway’s Jerad Bortz. (Photo by Mitsu Yasukawa/NorthJersey.com)

One church member, Ann Van Cleave, an actress who has performed in seven Broadway shows, said, ““It was our turn to give back to them. They are going to need so much help financially and emotionally, and our church just loves them.”

Bortz had been a cast member of Wicked for 12 years and previously performed in Mamma Mia and Pirate Queen. After the Feb. 4 show of Wicked, he got into a car with Skeels, whom he married in 2015, and the two were involved in the accident as they headed for the Poconos.

Bortz was treated at a local emergency room in the Poconos, then airlifted to Lehigh Valley Hospital in Allentown, Pennsylvania, where he underwent surgery. He was then transferred to Kessler Rehabilitation Center in West Orange, New Jersey. Although doctors say he will never walk again, they harbor hope that he can recover the use of his arms through vigorous rehabilitation. Skeels suffered a broken wrist and bleeding on the brain.

Reflecting on the outpouring of love from the Presbyterian Church at Tenafly, Bortz said, “We’ve developed such a relationship with Eileen [Lindner] and the congregation for the past 13 years. Even though this isn’t our church, we know these people and they know us. We feel so overwhelmingly blessed to have the tables turned on us and see this beautiful group of people now raising money for us. We simply couldn’t be more grateful.”

God, inspire us to reach out to others in need, sharing the love that sustains us through Jesus Christ. In Jesus’ name we pray. Amen.