Jed and Jenny are periodically in the United States and available to speak to congregations as their schedule permits. Email them to extend an invitation to visit your congregation or organization.

About Jed and Jenny Koball’s ministry

Jed Koball assists the Peru Joining Hands Network (Red Uniendo Manos Peru). Joining Hands is an initiative of the Presbyterian Hunger Program that addresses root causes of hunger in partnership with networks of churches and non-governmental organizations in countries with high poverty rates. These networks lead the struggle against hunger and poverty at the local level and are joined by Presbyterian Church (U.S.A.) presbyteries and congregational partners that address the same concerns on the global level. Red Uniendo Manos Peru is a network of eight Peruvian NGOs and churches located throughout Peru. These eight come together to identify the root causes of poverty and injustices and to address them in their local contexts by shaping and participating in strategic advocacy campaigns at the national and local levels. Red Uniendo Manos Peru tackles issues such as environmental contamination from the mining industry, the growing water crisis due to global warming, and trade policies that disadvantage many Peruvians. Jed helps facilitate partnerships between Red Uniendo Manos Peru and PC(USA) churches and entities in the U.S. to enhance participation in global advocacy campaigns. He resources the national and local work of the network in Peru as needed.

Jenny Koball is the Peru site coordinator for the Presbyterian Young Adult Volunteer (YAV) program, which sends people ages 19 to 30 to serve in communities of need in the United States and abroad. In addition to service, the YAV experience emphasizes living in intentional Christian community, spiritual formation and vocational discernment. Each YAV in Peru is placed with and accompanies one of the eight NGOs or churches that form the Red Uniendo Manos Peru.

Together, Jed and Jenny also host PC(USA) church groups to educate them about the issues being addressed by Red Uniendo Manos Peru as well as to involve them through hands-on service in the local efforts of the NGOs and churches of the network.

From its desert coast to the Andes Mountains and the Amazon Jungle, Peru is one of the most ecologically diverse places in the world, rich with natural resources. Once home to several Andean civilizations, including the Inca Empire, it was conquered in 1533 by Spain. Due to its vast territory and gold and silver production, Peru was by far Spain´s most important colony. Peru declared its independence in 1821, and with the help of General San Martín of Argentina and Simón Bolívar of Venezuela, the Spanish were defeated in 1824. Most Peruvians have not benefited from the nation’s abundant natural resources. The majority of the wealth is controlled by a small group of people primarily of Spanish descent and by an increasing number of foreign investors interested in the same natural resources. Subsequently, millions of people in the indigenous population live in poverty. Of related significance, Peru is also considered to be one of the three countries in the world most vulnerable to climate change.

Presbyterian missionaries from the United States and Scotland were first sent to Peru in the early 1900s. The PC(USA) works in partnership with the Iglesia Evangélica Peruana (the Peruvian Evangelical Church) and Red Uniendo Manos Peru.

About Jed and Jenny Koball

Although they come from diverse backgrounds, Jed and Jenny share a mutual calling to serve the people of Peru and a common faith imparted to them by their families.

Jenny grew up in a community in the high jungle town of Moyobamba, Peru. Early in her life, she became the caretaker of her family while her mother worked extremely long and hard hours to put food on the table. Her father was paralyzed in an accident and was unable to work. Oppressive poverty and terrorism ravaged the Peruvian countryside during her childhood. One day, while she and her brothers were hiding from terrorists looking for children to force into combat, her father told her never to stop praying. “I learned from him that God is our refuge, and I felt safe,” she says. Surrounded by hardship and violence, Jenny’s call to mission service began to take shape.

Seeking to secure a better future for herself and her family, Jenny moved to Lima to study business administration upon finishing high school at age 16. In Lima, she encountered Presbyterian mission co-workers for the first time and discovered the ministry of Joining Hands. In the context of these new relationships, her faith in a just and loving God was further strengthened, as was her desire to serve God and neighbor. Jenny began working as an office administrator for Red Uniendo Manos Peru, a position she held for nine years.

Jed was nurtured into faith during his formative years in Virginia and Arkansas. His role models included a mother who “had a Bible verse forever on her lips, a gospel hymn in tune for each occasion, and a prayer that never ceased.” After college, he became a Young Adult Volunteer (YAV) in the Philippines, an experience that influenced his spiritual life profoundly. While a YAV, he sought and found his place in the church’s collective response to systemic oppression. Inspired by the faith and struggle of his Filipino friends, Jed first sensed a call to long-term mission service with a focus on facilitating prayerful, meaningful and impactful international church partnerships.

Not long after arriving in Peru in 2009 as a newly appointed mission co-worker, Jed met Jenny, who had moved to Lima 11 years earlier. They married in October 2010 in Moyobamba in the presence of their families and friends. Shortly thereafter, Jenny began supporting Jed’s work and eventually took the lead role in coordinating the YAV site in Peru. She was officially appointed as a mission co-worker in 2014.

In between his time as a YAV and his appointment to Peru, Jed served as associate pastor of Larchmont Avenue Church in Larchmont, New York, and later as project and volunteer coordinator for a community development NGO in Nicaragua.

Jed graduated from St. Andrews University in Laurinburg, North Carolina, and McCormick Theological Seminary in Chicago. He was ordained in 2000 as a teaching elder by Hudson River Presbytery.

Jenny earned a business administration degree from Alas Peruanas University in Lima. She is a member of Broad Street Presbyterian Church in Columbus, Ohio.

In 2018, Jenny and Jed welcomed their son Thiago to their family. Together they reside in Lima.

Watch a video of Jed and Jenny Koball 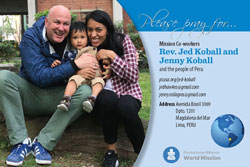 Use this card as you pray for Mission Co-workers Jed and Jenny Koball. The card includes a photo of them and an overview of their work.…

Give in honor of the ministry of Jed and Jenny Koball