#GivingTuesday – Join the PC(USA) in responding to a world in need! Give now!
Make A Donation Click Here >
Home › What We Do › Where We Work › Co-workers › Defending the Rights of the Poor

A letter from Jed Koball serving in Peru

Speak out, judge righteously,  defend the rights of the poor and needy—Proverbs 31:9.

“Logic and reasoning will not change the minds of politicians and powerful people; only social pressure can do that.” Anita—friend, activist, and ally—echoed these words from the floor of Congress following a daylong forum in Lima that our Joining Hands partners helped organize. The forum intended to inform members of the Peruvian congress about the grave dangers of their decisions to weaken environmental regulations in order to facilitate more foreign investment in mining. 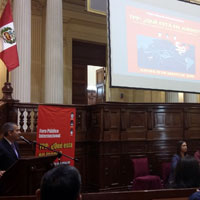 Much truth can be found in Ana’s words. Indeed, were logic and reasoning enough, the politicians would have authorized a major environmental cleanup project in the town of La Oroya long ago, when it was learned that over 1,000 square miles of soil were contaminated with lead up to four inches deep due to the operations of the metallurgical smelter in town. If logic and reasoning were enough, the Peruvian congress would have approved and enforced stricter emissions standards when they learned that 98.3 percent of the children in the town have lead poisoning. Certainly they would have funded a specialized environmental health care program for the region when the Ministry of Health discovered that 22 percent of all mortalities in the neighboring town of Sacco de Rosa were attributed to a cancer that could be directly linked to contamination caused by that same smelter. Perhaps they even would have placed environmental protections at the top of their agenda when the World Health Organization stated that 23 percent of all deaths in the world are related to environmental issues, or when they learned that nearly 60 percent of all social conflicts in Peru are directly related to mining-related environmental problems. I like to think that all this would have happened if logic and reasoning were enough. 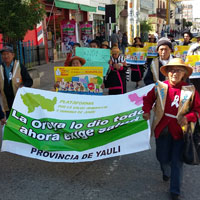 Residents of La Oroya march in the streets of Huancayo, carrying a banner that reads ¨La Oroya gave everything, now it demands health

But in the end logic and reasoning and the facts that support them simply are not enough. That is why we join our partners not only on the floor of Congress but in public protests on the streets of Peru. Just a few weeks ago we held a march followed by a public forum in the mountain city of Huancayo, the capital of the region of Junín where the town of La Oroya is located. We were marching and gathering to make known the growing concern for the devastating effects produced by heavy metals contamination throughout the region and the need to prioritize the health of the people and the land. When asked why she participated in the march that day, Lourdes, a local resident, declared, ¨My child has been sick his whole life. I am sick. My neighbors are sick. Everyone is sick. This is not what God wants for us. Our representatives must know this. ¨ 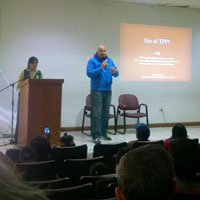 Jed addresses the public forum in Huancayo, explaining how certain environmental regulations are at risk

Some will question us and even ostracize us and our partners for dedicating ourselves to such work, claiming that it produces nothing but noise and no real results. In the end, aren’t the people of La Oroya still poisoned, still sick? they may ask. Maybe so, but they are also not all dead—neither in body nor in spirit. They still have hope. And in the end, is this not where our work both begins and ends—bearing witness to the light of all Life—a light that no darkness can ever overcome?

Little by little, together with our partners, we see the results of our labor. Step by step, heart by heart, voice by voice, change is coming. Let us not forget that it was over 500 years ago that King Ferdinand II of Spain commanded, “Get gold, humanely if possible, but at all costs get gold.” With this chilling demand, Ferdinand set in motion an expansive conquest, planting a model of development that to this very day prioritizes profits over people—not just in Peru, but the whole world over. Such change will not come overnight. Overcoming the power of profit will require the gathering of God’s people speaking in unison like a mighty voice rooted in the love of a merciful God who favors the poor, gives sight to the blind, and proclaims liberty for the captives and freedom to the oppressed.

To close, Jenny and I would like to thank you—all of you—for continuing to listen patiently and attentively to our clamor for justice. Thank you for graciously offering your support—your prayers, your financial contributions, and even your voices of solidarity. We invite you to accompany us on this journey through your prayers, your financial support and your solidarity.

Our most recent travels to the U.S.—in which we visited many of you—only further encouraged us to continue sharing what we know to be the Good News of God’s love in Christ—Good News that compels and beckons us to do just as the ancient proverb proclaims, “Speak out, judge righteously, and defend the rights of the poor and needy.”