#GivingTuesday – Join the PC(USA) in responding to a world in need! Give now!
Make A Donation Click Here >
Home › What We Do › Where We Work › Co-workers › Of Soup and Soap

A letter from Jed and Jenny Koball, serving in Peru

Marina let out a gasp when she opened the door. She could hardly believe her eyes. Lying before her was a young man, half-clothed and covered in soup!

Earlier that day, the young man—a twenty-something-year-old volunteer from the United States, who will remain unnamed—had told his Peruvian host mother, Marina, that he was not feeling well. Perhaps it is a stretch to say that he actually ¨told¨ her, because his Spanish was lacking at best. But in some form or fashion he got the message across that he had an upset stomach and would be staying in bed for the day. To make him feel better, Marina offered to make him some soup.

Marina, like so many Peruvian women of her generation, has spent her entire adult life tending to the needs of others. If not at home caring for her children, she is often found at church caring for God´s children. Altogether, Marina raised six kids of her own—all daughters! But, most of them are married now and have left home, and so the rooms of her house have begun to empty out. 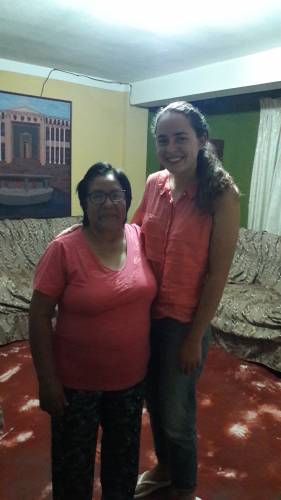 Marina welcomes her new ¨daughter¨ Katie Hastings to her home for the 2017-2018 YAV year. (photo by Jenny Valles)

An empty room is exactly what I was looking for about four years ago—not for me, rather for one of my Young Adult Volunteers (YAV). In Peru, we have designed the YAV program so that each volunteer has a unique, in-depth and intensive immersion experience through which they learn, serve and become transformed by the love and grace of God that they come to know through our Peruvian partners. And so, I place each volunteer in a different town with one of our partner organizations that make up the Peru Joining Hands Network. I also place each volunteer with a Peruvian host family with whom they live for the duration of their time in Peru.

To be quite honest, Peruvian families are not exactly lining up to receive young adult volunteers from the U.S. in their homes for an entire year. This is not because they do not welcome people from the U.S. Rather. most families simply do not have the room, and the language and cultural differences are very intimidating to many. So, when I learned about Marina through a friend, I went as quickly as I could to meet her and inquire about her interest in becoming a host mother.

Marina was so very timid when we first met. She would hardly look me in the eye, and this worried me. If she could barely talk with me, a fellow Peruvian woman, how would she ever talk with a young adult from the U.S. who is just learning Spanish? Nonetheless, she had a sweet demeanor. She also cooked really, really well! On that first visit, she offered me lunch, and it became apparent very quickly that Marina expressed much of her love through her cooking.

Love was what she was offering that day to the ailing volunteer. Understanding that he was not feeling well, Marina went to the kitchen to make him soup. When she brought it to his room, she said loudly and clearly, “Sopa!” (the word for soup). From his bed, the young man looked confused, so Marina repeated several more times, “Sopa!” As she said the word for soup, she rubbed her belly to indicate that the soup would make his stomach feel better. He sheepishly took the bowl of soup, and Marina left the room so that he could rest. 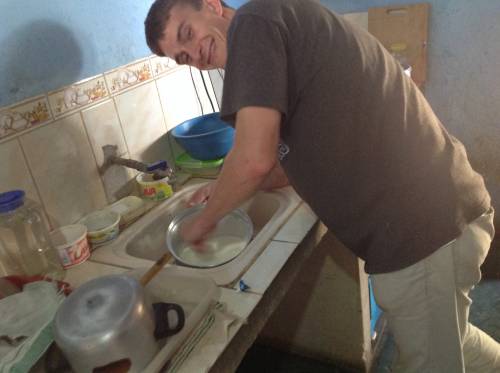 YAVs are to be treated not as guests, but rather as members of the host family. This means they need to do their part. For former YAV AJ Newcombe, this meant washing dishes! (photo by Jed Koball)

Host mothers like Marina are the unsung heroes of the YAV program in Peru. While they graciously offer our volunteers a place to rest and food to eat, they offer so much more. There are limits to what I can prepare the YAVs for during our four-week orientation time in Lima. It is not until they are on their own living with their host families that they appreciate how much they need to learn simply to survive. It is the host moms who teach them how to use public transportation, how to wash their clothes by hand, and even how to flush a toilet! Beyond these survival skills, they also provide lots of advice and encouragement. But perhaps the most significant thing they offer our YAVs is endless patience as they develop their Spanish.

By now, you may have noted that the Spanish word “sopa” sounds a lot like the English word “soap.” Perhaps his stomachache had passed to his head, because the volunteer certainly was not thinking straight. When Marina left his room, he took off his shirt and then took the soup, and just like Marina showed him, he rubbed it all over his belly!

To this day, when I tell our partners about the amazing Young Adult Volunteers who are willing to offer a year of their lives to serve God here in Peru, I often think of this young man, which makes it very difficult for me to keep a straight face as I try to assure them that we receive nothing less than the best and the brightest the U.S. has to offer. Truthfully, we have never sought the ¨best¨ and the “brightest.” We open our doors and welcome those who are called—those who are humble, those who have compassion, those who want to learn, those with love to share and peace to give. Perhaps more than anything, we seek those who are most willing to make themselves a fool for the sake of Christ! 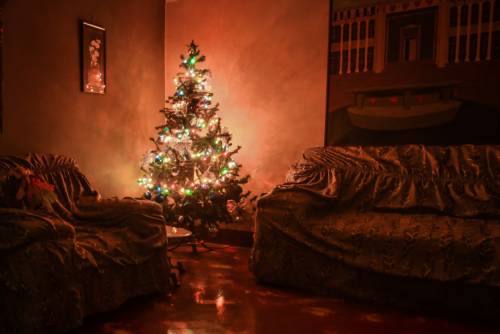 The holidays can be a particularly challenging time for many YAVs. Marina, like all of the host mothers, prepare their homes to welcome the YAVs into all of their family customs and traditions. (photo by Kristen Young, 2016-2017 YAV).

Often it is such foolishness that allows us to grow. The young man certainly learned the difference between sopa and jabon (the real word for soap). Marina also learned something. She learned that if a young adult from the U.S. can take the tremendous risk of coming to Peru, then she, too, can take risks! Today, Marina is a leader among our growing community of host moms. She no longer bows her head when speaking to others. Today, she speaks with great confidence and a twinkle in her eye—especially when she tells the story of the half-naked man bathed in soup!

The laughter brought by such memories is a divine gift that continues to sustain both Jed and me. We are further filled with joy when we can share such laughter with you. Know that we hold you in our thoughts and prayers, just as we know you continue to support us both prayerfully and financially in this gospel ministry we share. For this and for so much more, we give thanks to you and to our God who laughs with us, too!