A letter from Jenny Koball serving in Peru

Hidivia stood in the doorway of the office manager and cried. Day after day, week after week, month after month, with nary a coin in her pocket, walking from house to house to gain support from the community, she had finally brought to the branch office of the light company her petition to have electricity installed in her neighborhood. And once again she was denied.

Hidivia arrived in the dusty hills of Chorrillos, a district in the southern part of the mega-metropolis of Lima, nearly 15 years ago. With her family in tow, she established roots in the San Genaro community, known as a “human settlement” because it was occupied by “squatters.”  She, like her neighbors, did not have title to the land they were building a home on, but no one seemed to care. It was barren land. Undeveloped land. A desert. There were no basic services (water, sewage, electricity). There were no roads. There were not even steps to the top of the steep hills where she and her family would begin building their home out of scrap wood and metal on top of sandy soil. And yet, this is exactly where she wanted to be—in Lima, and closer to “opportunity” for her and her family. 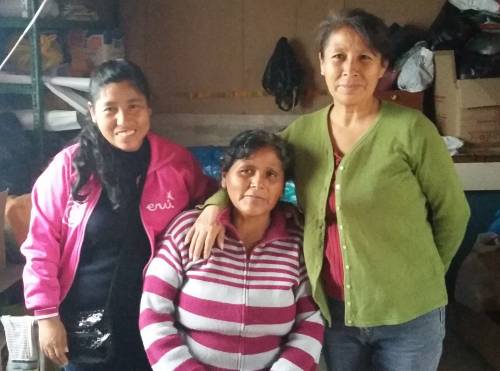 The first sign of “opportunity” came to Hidivia when she was invited to be part of an artisan group in conjunction with our partner’s Bridge of Hope fair trade program. She did not have any developed skills in handicrafts and she always considered herself incredibly shy and timid, as did her family and friends, so finding opportunity was not always easy.  Therefore she did not think twice—she jumped at the invitation. She and two other women from the community, Jobita and Prisila, formed the group Kuichi. Together they learned to produce colorful and creative handmade bags and backpacks among other meticulously stitched products.

Over time as their skills developed, international orders for their products began to increase, and they soon saw economic benefits to their labor. Receiving what they deemed a “fair price” (indeed, it is Hidivia, Jobita and Prisila who set the price of their products), they felt pride because they could help their families grow into a more secure future.

But it was more than economic growth that transformed Hidivia. Somewhere in the midst of developing skills, she developed self-confidence. Her voice began to emerge, and she wanted to use that voice for the benefit of the community. Of all the people in her community, no one expected that shy, timid Hidivia would be the first woman to run for the presidency of the community board. But she did. Her platform was both simple and monumental—to get water, sewage and electricity installed. 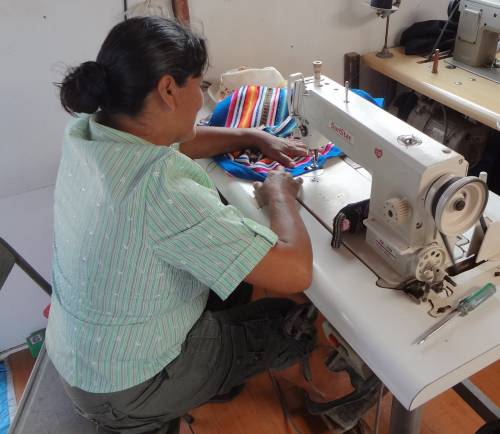 Hidivia works on a backpack

For Hidivia fair trade is not simply about personal economic gain—it is about developing herself in other ways toward the end of helping develop the larger community. Perhaps it was her passion and hard work, or perhaps it was the community’s past experience with corruption among the male leaders, but either way she won the majority of their votes. Hidivia was the new president. And she quickly went to work.

Together with Jobita and Prisila, Hidivia walked the dusty paths and hills of San Genaro for weeks and months on end to gain the written support and small monetary contributions of the community in order to get electricity installed. Many were resistant, fearing corruption. Many simply did not believe it was possible. And so with the little support she had, Hidivia went to the branch office of the light company to plead her case.

She was rejected time and time again—until finally, after nearly two years of trying, she won. Hidivia had fulfilled the first stage of her campaign promises, radically changing the lives of the hundreds of families by providing electricity.

And yet there was no celebration.

To the contrary, she was accused of corruption. Nothing good could possibly happen simply from hard work and persistence, thought many. Whether jaded themselves by the corruption of past leaders or simply jealous at the success of their neighbor, Hidivia lost support despite her achievements.

Despite accusations of corruption, Hidivia continued in her efforts. A year later sewage was installed. Soon she hopes water will be installed directly to each home in the community.  Through her faith and persistence, her neighbors have a more secure place to live because of the opportunity provided through fair trade.

Know that Jed and I continue to be immensely grateful for your prayerful and financial support of this ministry we share with our partners in Peru in addressing root causes of poverty.  If you have not given already, please consider making a donation today.