Christmas Joy Offering – Supporting our leaders: past, present and future.
Make A Donation Click Here >
Home › What We Do › Where We Work › Co-workers › Gathering in Grace

A Letter from Jed and Jenny Koball, serving in Peru

Individuals: Give online to E132192 in honor of Jed and Jenny Koball’s ministry

Congregations: Give to D500115 in honor of Jed and Jenny Koball’s ministry

“…when Jesus heard this, he withdrew from there in a boat to a deserted place by himself. But when the crowds heard it, they followed him on foot from the towns. When he went ashore, he saw a great crowd, and he had compassion for them…” Matthew 14:13-14

We had each been asked to bring a handful of soil from the land we represent. When it was our turn to introduce ourselves, we were to say our name, the place we come from, and a hope we had for our time together, and then we were to add our handful of soil to a small mound in the center of our circle. There were about thirty of us in total, representing churches and indigenous communities from Mexico to Argentina. We were gathered in Lima for a weekend-long retreat of the Churches and Mining Network of Latin America – people of faith united in confronting the destructive impacts of the extractive industry. This was the first in-person gathering for most of us in over two years, so perhaps we should have anticipated that the 30 minutes we were given for this ritual of introductions would not suffice. Indeed, three hours later, the mound of soil was still growing. 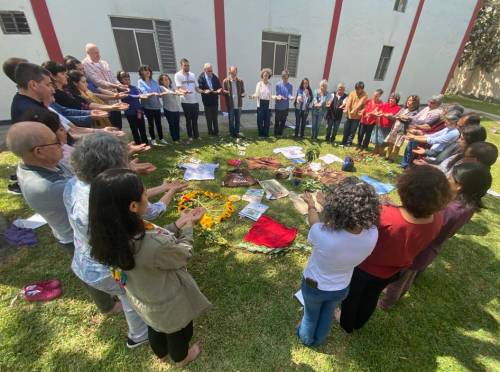 From across the continents, church and indigenous leaders receive a blessing at a gathering in Lima of the Churches and Mining Network of Latin America. (Photo taken by Javier Jahncke) Koball’s serving in Peru.

What was clear was that each one of us had a story to tell. More precisely, each one of us had experiences to lament. After a long winter of social isolation, we needed someone to hear what we had endured. For many, it was the loss of loved ones to COVID-19, often coupled with the anguish of not having access to health care, vaccines or even oxygen. For others, it was the economic strain to keep food on the table. And yet, for others, it was the violence that flooded the lands. Domestic violence. Social violence. Political violence. We learned that in Peru alone, over a dozen indigenous leaders had been assassinated during the pandemic because they never ceased in the defense of their lands from a mining industry that also never ceased in its destruction.

The world has been traumatized these past couple of years. Some for the first time. Others for the umpteenth time. The bad news continues to be relentless and leads many of us to escape and isolate. This is not necessarily wrong; in fact, it is what Jesus did. He escaped, if only for a while. Upon hearing the traumatizing news that his cousin John the Baptist had been killed and his head served on a platter to King Herod (Matt. 14:10-12) – the same king who tried to have Jesus himself killed as an infant (Matt. 2:16) – Jesus withdraws to a deserted place by himself. Like Jesus, sometimes we just need to be alone to begin the healing. But only for a while.

When the crowds followed him, Jesus did not run. He did not rage. He did not resent. From his place of suffering, he saw the pain and trauma in others, and he embraced them. He had compassion for them. And he fed them—all five thousand plus (Matt. 14:21).

I confess that I have wrestled with and harbored much anger and resentment these past two years. In the early weeks of the pandemic, I actually felt a sense of solidarity because across the world; we were all learning to cope together. Even when it became quickly apparent that many were going hungry because of a paralyzed economy and others were suffering because of a depleted health system, I still felt hopeful and impassioned by those who rallied to help start community kitchens and fundraise to buy oxygen tanks. But, I started to become bitter by the end of the first year, when vaccines became available in the northern hemisphere while much of the global south had none. Jenny and I lost over two dozen friends and colleagues to COVID-19, many of whom I believe would not have died had they had access to vaccines in time. The bitterness only seemed to grow over the following year as not all nations appeared to be taking the pandemic with the same seriousness. So many seemed ready to forget it ever happened. 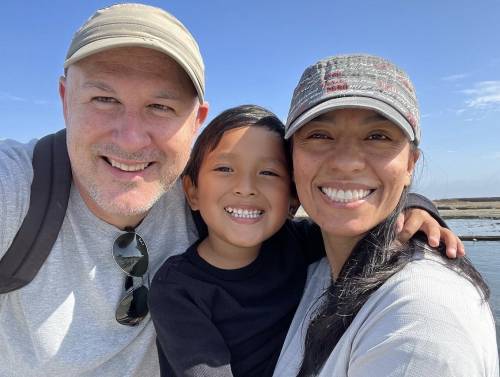 Soils from north and south and other gifts of Creation center the sacred space of healing where the commitment to live in harmony with the Earth and one another is renewed. (Photo taken by Jed Koball)

And yet, we do need to move forward. We cannot live in isolation and separation forever. We need to come together, physically, spiritually, and with purpose, lest the bitterness destroy us in ways that no virus or violence could ever do. We need to do as Jesus showed us. From our places of pain, Jesus invites us to see the pain of others and to have compassion on them. This is the way forward – the only way forward that will sustain our life together on this one Earth we share.

When it was my turn to introduce myself, I did not have a handful of soil to place on the mound. I explained that I did not know what soil to bring because I am not from this place and that it would feel colonialist to claim it as my own. My sentiments were appreciated in the moment, but after our time in the circle came to an end, an indigenous woman from the Amazon approached me and said, ¨No one can claim the land as our own. The land claims us. We merely proclaim our intention to live in harmony with the Earth and with one another, wherever we find ourselves.¨ And then she invited me to place my hand in the soil as if to say, you are where God wants you to be.

I realized that underneath the bitterness I was harboring was guilt: guilt that perhaps I am not where I should be nor doing what I need to be. Such thoughts can fester and deepen wounds when we spend too much time alone. The healing can only continue when we create sacred space for telling our truths and listening prayerfully to the truths of others. Like the masses who followed Jesus, we are fed by the grace we find in one another.

With deep gratitude for the grace, I know in you,

Jed (and on behalf of Jenny)