Joining Hands is turning 20! Please visit the Joining Hands Anniversary page to read stories from our partners and more.

Joining Hands is a part of the Presbyterian Hunger Program

What You Can Do

Go! Travel to places where Joining Hands is active to meet with people experiencing injustices and learn to organize for systemic change. www.pcusa.org/trips

Join! If you are an individual passionate about fighting systemic causes of poverty, there’s a place for you around the table. Contact valery.nodem@pcusa.org for more information.  Let’s problem solve together!

The Presbyterian Hunger Program accompanies communities and civil society organizations as they come together to challenge systems that generate hunger, poverty and injustice. We support advocacy campaigns that aim to improve policies or corporate practices that impact fundamental rights to water, food, land and other natural resources.

In today’s globalized world, with the high demand for food, water, energy and other resources, poor communities that depend on these resources for their survival often face challenges to ownership, management of, and access to their natural resources.  These communities are confronted with problems of seed monopolies, land grabbing, mining pollution and trade policies that favor foreign investors over people.

Powerful actors such as governments, private investors, multinational corporations and multilateral banks motivated by profit set policies that favor large-scale extraction of resources with minimal or no benefits for local communities.

Responding to poverty through projects is not enough if systems that create or perpetuate hunger and poverty are not properly identified, analyzed and challenged.  PHP supports the rights of local communities to protect their natural resources and livelihoods from destruction by large investment projects.

Much of PHP’s work defending resource rights is done through the Joining Hands initiative.

Some focus areas for our campaign work are:

Trade: We support greater transparency in trade agreements so that foreign investors’ rights are not privileged over citizens’.  We advocate for trade agreements that protect workers, consumers, the environment, and public health, and ensure the protection of human rights.

Joining Hands is committed to justice, restoration of the Earth and the abundant life promised by God for all people.

The Joining Hands Initiative is an innovative way to mobilize people in focused campaigns to tackle systemic causes of hunger both in the United States and abroad as a witness to the wholeness of God’s creation.  Joining Hands is committed to a holistic hunger ministry and its work is integrated with the mandate of the Presbyterian Hunger Program, outlined in the Common Affirmation on World Hunger.  The five components of the mandate are: Relief of chronic hunger, development assistance, public policy advocacy, lifestyle integrity and hunger education.  It also considers that spiritual wholeness is necessary for a sustainable community as indicated in Hope for a Global Future and adds this dimension to the five programmatic areas mentioned above.

Both presbyteries and congregations are invited to work within a denominational coalition that joins with marginalized people in ten countries, including churches, nonprofit organizations, community groups and members of other faith traditions – what we call communities of mission practice, who in disciplined ways, engage the world together through common spiritual and ethical values. Rather than replicate project-based mission, the goal of Joining Hands is to organize together in both the Northern and Southern hemispheres to campaign for peaceful social change in a globalized world.

Most of the issues identified by global partners as contributing to poverty abroad are also relevant in the United States.  This effort is not about going somewhere else to do mission. Instead, we look together at the immense troubles we all face on a small planet and pull together in prayer, research, repentance, and in a process of mutual transformation that reflects our shared commitment to restoring the wholeness of God’s creation by contributing to the building of a more peaceful and just world.

We envision a growing and spiritually-grounded movement that maintains an ethical focus on:

We see a movement that:

We envision a transforming partnership that is:

We look forward to:

One global trend occurring is where transnational corporations are privatizing seeds and promoting chemical dependent agriculture on an industrial scale in the developing world, resulting in the loss of traditional seeds, biodiversity and local control of food systems.

Another global trend is one where transnational corporations are buying up land in developing nations, bulldozing some of the most diverse and fertile lands there, including rainforests and traditional farmlands, and planting in their place mono-crops for the production of biofuels or livestock feed for consumption in developed nations.

Some of the most fragile coastlines are being trampled by developers to boost tourism.

In the process, indigenous people are being displaced from the land they have lived on, farmed, fished and protected for generations, leaving both people and the land impoverished.

These land deals lead to food insecurity in local communities, no longer having access to the land for food production, forcing them to purchase food from markets with very little or no access to income since they have been separated from their sources of livelihood.

Download a poster on Food and the Climate Crisis 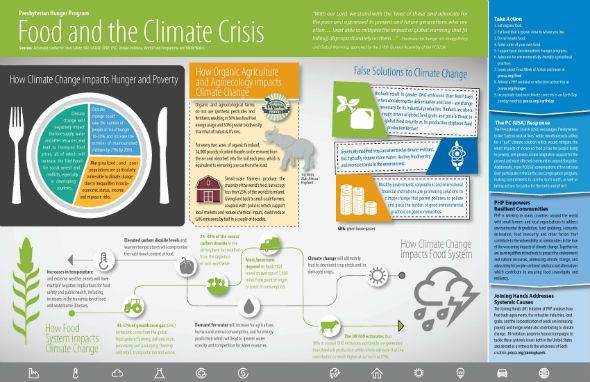 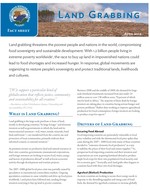 While it may seem that countries rich in natural resources may be rich, that isn’t true.

The “resource curse” shows us that countries with great oil, gas and other extractive industries are often the poorest, with less economic growth and worse development outcomes than countries with far fewer resources. In fact, countries with rich natural deposits are often plagued by corruption, civil war, human rights abuses, authoritarian governments, land grabs and environmental degradation – because powerful sectors  want to control the profits.

Few communities within these countries benefit from the gas we pump into our cars, the electricity that keeps our houses warm and the minerals that power our computers. In some cases, those communities were damaged by lax labor laws, poor environmental protections and violence, so that the poor became poorer. 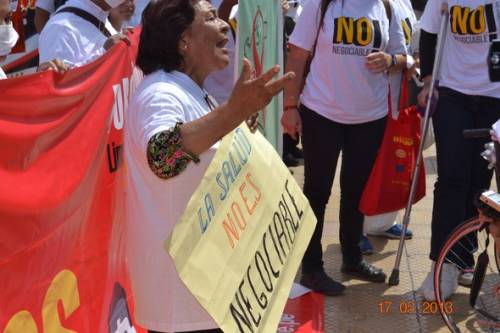 On October 6, 2015, the twelve countries that have been negotiating the Transpacific Partnership (TPP), a multilateral free trade agreement, for the past eight years reached an agreement. Now the agreement must be ratified by the Congress of each of those countries. Despite the secrecy of the negotiations, we know through leaked texts and more recently from commentaries made by some of the negotiators themselves that the TPP includes components that threaten the health, environment and national sovereignty to Peru.

Joining Hands supports work for fairness in the global economy so that trade agreements protect the rights of workers, consumers, the environment, and public health, as well as human rights.

The work of Joining Hands around trade issues is:

Trans-Pacific Partnership (TPP) Free Trade Agreement TPP
A free trade agreement that is under negotiation now between 11 participating countries. It is, to date, the biggest agreement of its kind.
A scriptural approach to trade
Atle Sommerfeldt, director of Norwegian Church Aid, discusses the theology of trade based on the multitude of Biblical texts that speak about the issue.
Webinars and Videos
Use these videos in Sunday School classes, in sermon preparation and in personal study as you prepare for public witness.
Neighbor-love …
A Biblical precept that defies greed Read books by authors who interpret contemporary issues through our spiritual traditions 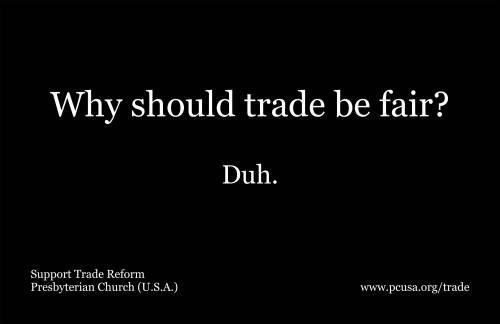 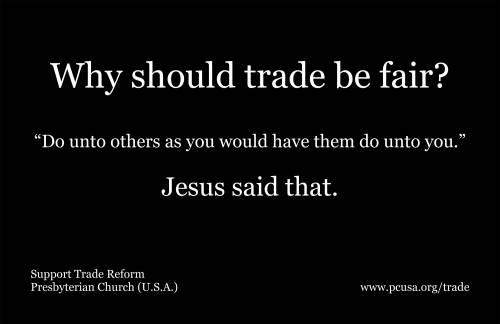 Print these posters and hang them at your church, school or business. 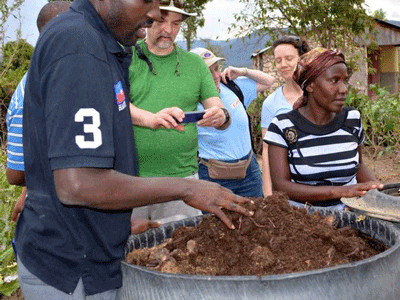 To help Haiti, we must understand Haiti 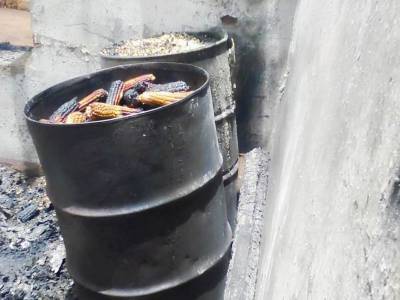 The Anglophone crisis in Cameroon 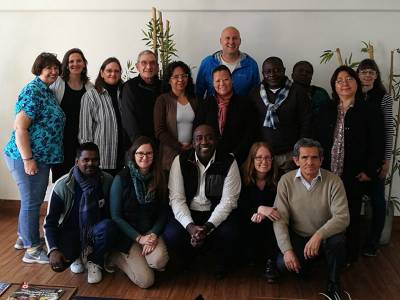 Use this card as you pray for mission co-worker Cindy Corell. This card includes a photo and overview of her work. As a companionship facilitator for FONDAMA, the Joining Hands program in Haiti, Cindy connects agricultural experts in Haiti with Haitian farmers to help farmers do what they do best—grow food for others. As the… Read more »

This one-session Bible study will give participants the opportunity to reflect on the biblical call to work as partners with people who have been made poor in order to address hunger and its causes.