#GivingTuesday – Join the PC(USA) in responding to a world in need! Give now!
Make A Donation Click Here >
Home › What We Do › Where We Work › Co-workers › A Mountaintop Message

A letter from Jed and Jenny Koball serving in Peru

“Jed, follow me. We’re going to a Pachamanca.” I had no clue what Angelica was talking about. Already above 14,000 feet, we started walking higher until we reach a clearing on top of a hill, surrounded by mountain peaks in every direction. There on top of the hill the community was gathered. They had built a small igloo out of rocks. Inside the igloo a fire was roaring. Nearby they had dug a hole in the ground. Soon they would start putting the hot rocks into the bottom of the hole, and on top of the rocks they placed pieces of meat—beef, alpaca, chicken. A Pachamanca is a thanksgiving feast.  On top of the meat, they put wet leaves and then more rocks followed by potatoes, corn, fava beans, and humitas, and they buried it in the earth. And then we waited. 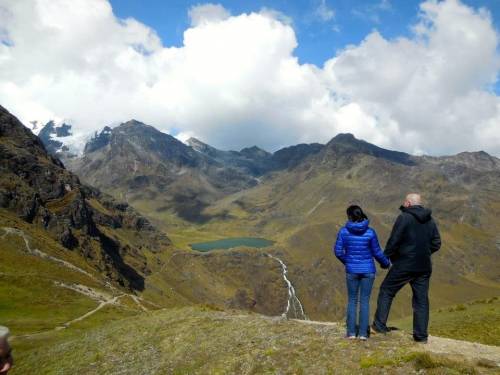 Jed and Jenny look out toward the Huaytapallana glacier, which is rapidly melting.

It was only a couple months prior that I had met Angelica for the first time high up in this Andean community. I was there because a church from the U.S. was sending a mission team later in the year to work on a project together with the community. I needed to discuss the plans with Angelica, the director of a member organization of our Joining Hands partners working directly with the community. She told me that the people of the community were alpaca herders and that the pastures where the alpaca grazed were dying. The grass did not receive enough water, and the community wanted to install an irrigation system. So the church advanced funds in order to begin the project, and I said that I would return prior to the church’s arrival to see how they were progressing. A couple of months passed, and I returned to the community only to notice that they had done nothing with the irrigation project. I ask Angelica, “What happened?”  I was a little upset, a little angry, a little embarrassed. I didn’t know what I was going to report to the church in the U.S. And it was at that moment that Angelica invited me to my first Pachamanca.

As we waited, and as I took in the beauty of the Andes that surrounded us, I see a storm cloud off in the distance. I say to Angelica, “You know, I think it’s going to rain.”  She says, “Don’t worry. Everything is fine.”  A few moments pass and I hear thunder rolling in the distance, and I say, “You know, I really think it’s going to rain.” And she says, “Really, it’s going to be fine.”  Soon the wind starts picking up, there’s a flash of lightning, and I say, “You know, Angelica, we’re a little exposed up here; it’s about to rain.” And she says, “Jed, relax, we’re just fine up here.” And then the clouds break open and the rain comes pouring down on us, and Angelica turns to me and says, “Jed, I think it’s going to rain! Let’s go!”  Nearby there was a small shelter—a place for the alpaca to stay warm. So we gathered there—the entire community, women, men and children, alpaca, dogs, a few pigs and sheep as well. We were this living Nativity scene right there in the middle of the Andes mountains. Little did I know, Angelica—the angel that she is—was about to deliver some unexpected news to me. 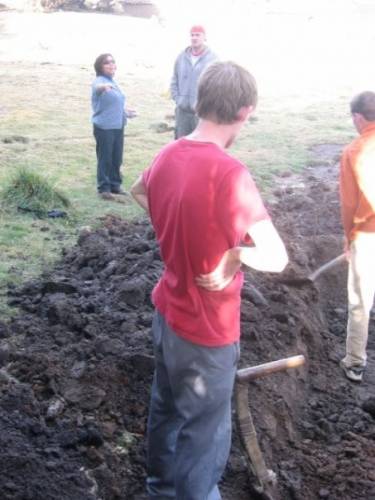 Angelica gives instructions to Jed as volunteers from the U.S. help in the construction of an irrigation system.

She said to me, “Jed, you see those mountains to the north? From those mountains a river flows toward us, feeding the land. That river is poisoned from foreign mining activity. The river is dead. And, you see the mountains to the south? In those mountains are great lagoons that feed our animals. But down on the desert coast below, corporate farms are siphoning off that water for their own use, leaving our animals thirsty. And you see those mountains to the east? On top of those mountains are snowcaps that feed our aquifers and mountain streams. Those snowcaps are melting because of the rising temperature of the planet. Soon they will be gone. So when we awaken each morning we don’t see only the stunning beauty of God’s Creation that surrounds us, sustains us and feeds us, we also see the powers of death that loom over us, hiding in the darkness and holding us captive. This irrigation project that the church wants to fund—it will help us. It will make a difference. But if that is all we ever do, then we are effectively doing little more than tending to our own funeral.”

Shortly thereafter the rain stopped. We emerged from the shelter and unburied the feast that awaited us, giving thanks for the bounty of God’s gifts. I committed myself that day to joining with our partners not only in ensuring that the irrigation project got done but that neither the church, nor I, nor anyone else would bow down to the powers of death looming in those mountains. And we began our mission—God’s mission—by heading to the north, the south, and to the east to better understand some of the most daunting problems facing Peru and the world today.

That was six years ago. The small irrigation project did get finished, but our work is far from over. In many ways our work has only just begun as we the church, together with our partners, continue to awaken to the reality of God’s calling to be resurrection people. Together we are addressing the root causes of poverty and injustice in the Andes through global advocacy campaigns responding to contamination from the mining industry, unfair trade agreements, and climate change. In partnership sustained by our faith in the God of life and love we are undaunted by the powers of death looming in this world, and we are living courageously into the hope of a world flowing with justice and peace for all people and Creation.  We invite you to join us!

As always, with gratitude for your support in this gospel ministry we share,
Jed and Jenny