#GivingTuesday – Join the PC(USA) in responding to a world in need! Give now!
Make A Donation Click Here >
Home › What We Do › Where We Work › Co-workers

Blog: A Journey Across Haiti

Cindy occasionally returns to the U.S. and is available to visit congregations. Email her to extend an invitation to your congregation or organization.

Based in Port au Prince, Haiti, as a Joining Hands network companionship facilitator, Cindy Corell connects presbyteries and churches in the United States with a network of churches, grassroots groups, and nongovernmental organizations in Haiti. Around the world, Joining Hands networks strive to alleviate poverty and suffering through community education, advocacy, alternative economic activities, lifestyle changes, and spiritual grounding. The goal is to restore the wholeness of God‘s creation and the healing of the human family through prayer, mutual visits, humble accompaniment, repentance, and mutual transformation. Presbyterian World Mission assigns mission personnel to help facilitate this effort, which is a ministry of the Presbyterian Hunger Program.

Haiti became an independent country in the early 19th century when a slave revolt overthrew the French colonial government. It has had a turbulent history marked by military dictatorships, corruption and violence. In 2010, a massive earthquake struck the capital city of Port au Prince and the surrounding area, dealing a devastating blow to what already was the poorest country in the Western Hemisphere. The Haitian government estimates that the quake killed 316,000 people and destroyed 250,000 residences and 30,000 commercial buildings. Through its disaster assistance ministry, the Presbyterian Church (U.S.A.) arrived quickly to assist with recovery efforts and continues to help the country rebuild. The PC(USA) has been involved in Haiti for many years, working in health, hunger, and education ministries through a partnership with the Episcopal Diocese of Haiti.

While serving as a volunteer youth advisor in her Virginia congregation, Cindy accompanied the young people on mission trips, hoping they would “find their missional feet” and experience the joy of serving others.

However, as Cindy participated in mission in settings ranging from the surrounding community to national destinations, she became keenly aware that serving others in Christ’s name was having a profound impact on her own life. Her spiritual awareness deepened, and she was “ready to dive deep into the sea of serving others.”

In 2010, when she made her first trip to Haiti, Cindy sensed a heartfelt connection with this Caribbean country and its people. “I learned that everything I’d ever accomplished in 48 years of living had prepared me for being in that land of beautiful people,” she says. “I was forever changed, and I could no longer be satisfied in an ordinary job and only finding fulfilling and meaningful work on the side.”

So Cindy left a 27-year career as a journalist to accept a Presbyterian mission appointment in Haiti. Having traveled to Haiti and having co-chaired a Virginia-based nonprofit organization that funds educational endeavors in that country, she knew ministry there would be fraught with challenges and frustrations. When facing difficult situations, Cindy is thankful that family, colleagues, friends and supporters stand with her. She realizes that progress comes slowly, and “rejoices in triumphs, however small.”

Cindy says she hopes her work with people in Haiti and the United States results in transformed lives in both countries. “I want people to feel comfortable asking questions, even tough questions, about why life in Haiti has been so hard, especially for farmers in what was once such a verdant land.”

“When we reach out our hand to help our neighbors as Christ commanded, so often we meet the people who match this lovely description,” Cindy says. “We might not recognize them as such right away. They might not even know how precious their own hearts are. They might be beaten by the negative forces of the world, yet they strive to help others.”

In her career as a journalist Cindy worked at two Virginia newspapers, the Union Star in Brookneal and the News Leader in Staunton, where she served as community conversations editor. In this role, she edited the opinion page and wrote editorials and a weekly column.

Cindy earned a bachelor’s degree in English and communications at Longwood College in Farmville, Virginia. She is a member of Tinkling Spring Presbyterian Church in Fishersville, Virginia, where she was ordained as a deacon.

Watch a video of Cindy Corell 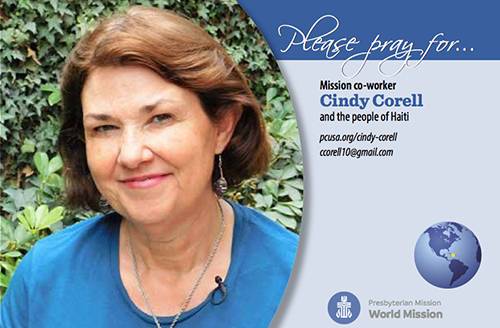 Use this card as you pray for mission co-worker Cindy Corell. This card includes a photo and overview of her work. As a companionship facilitator…

Give in honor of the ministry of Cindy Corell