Make A Donation Click Here >
Home › What We Do › Where We Work › Co-workers › We Are Rich! (Coming closer every day to finding the Abundant Life, in Haiti)

The National History Museum of Haiti is filled with tools of cruelty. Haiti’s history began with French landowners building and operating sugarcane plantations with the sweat and blood of African slaves, and those stories are told in graphic detail. The Spanish bought men and women from Atlantic slave traders to develop Hispaniola before France acquired the western third of the island and called it Ayiti. After that, French masters bought thousands more.

It is said that slavery under the French in Ayiti was among the most terrifyingly violent. From the time he arrived in Ayiti, a slave lived an average of seven years. Cruel overseers terrorized runaway slaves who were caught, brutally punished others for the most minor offenses and would regularly torture slaves for entertainment.

Images and tools of brutality are on display at the museum — shackles, whips and a 50-pound weight that was placed on the heads of women accused of abortion. Abortion, the museum guide will tell you, “is resistance.” Any child born in slavery was a new slave. To abort it was theft. Even after slaves broke their own shackles to create the first black free republic in 1804, colonial attitudes from outsiders, dictatorships and massive corruption have kept the people of Haiti in dire poverty with little infrastructure, minimally adequate healthcare and a stagnant and challenged education system. 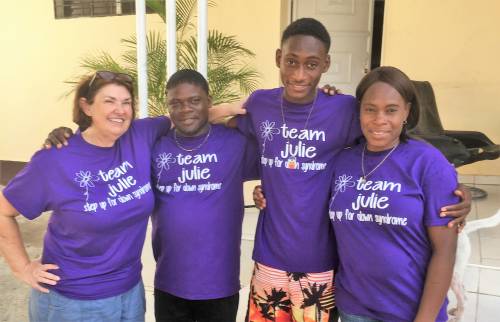 Cindy Corell, with her “family” in Haiti: Garry Pierre Paul, Didy and Nadia, all wearing T-shirts for Team Julie. Julie Nicholls is Cindy’s great-niece who died April 9 at 4 months. Since Julie was born with many medical challenges, this family prayed without ceasing for her and her family. Even months later, when Cindy leaves to travel to the U.S., Nadia whispers in her ear, “Please tell Julie’s Mom we are praying, and that we love her.” Photo by Armand St. Pierre

Thousands of visitors fly into Haiti each year as missionaries, experts or other helpers. Almost to a person, they will explain the great appeal of this poor, small country: The people greet them with kindness and enormous hospitality. Yes, the descendants of cruelly maltreated slaves who still cope with poverty welcome us with gentility that leaves our “Southern hospitality” wanting.

I moved to Haiti five years ago as a mission co-worker. I’ve spent this spring remembering my first few years.

The greatest surprise remains that in the midst of their evident lack of resources, the people of Haiti are leading me toward the abundant life they find each day.

I came here at the ripe age of 51, yet learning a new language and plunged alone into this culture, I felt more like a toddler. And the first family who took me in treated me with the same gentle guidance and structured lessons that a preschooler would receive.

Luc Celestin is a 60-something widower with eight grown children. He took me into their small wooden home in the rural mountains, his children taught me Haitian Creole and I was a member of the family.

I tried to wash my clothes one day the way the women did: pouring water over them in a shallow tub and scrubbing them with a bar of laundry soap.

“No,” Jennifer said. When I asked why, she said in Creole: “Because Papa Luc says, ‘Cindy is to eat, sleep and learn Creole!’”

When I left the toilet paper roll I found in my room in the outhouse, Esther brought it back to me and told me, sternly, “This is for you. It’s not for everyone.”

Other people, I realized later, used sheets torn out of old school notebooks.

No matter how hard I tried to be a part of this family, I was different. I was an outsider. I was to be treated with absolute kindness.

“Did you eat?” Papa Luc would ask me every day when he returned from his carpentry shop.

“Esther, did Cindy eat a lot?”

“You don’t believe me?” We would laugh together.

I would learn that asking someone if they ate is another way to say I love you. When Papa Luc’s wife, Malia, was living, she would call her children living in Port-au-Prince every day. “She would ask if we ate,” Herns told me. “And if we hadn’t, well, she wouldn’t eat that day either.”

So her children began to lie to her.

Fast forward five years, and I have another family in Haiti. One that I’ve found. Garry is our guardian, which means he provides security, opens the gate for visitors and runs the generator as needed. Nadia and her 17-year-old son, Didy, live behind our house. She cooks for us and keeps house. Armand was my guardian before, and he lives here, too. We have a nice house in a nice neighborhood and deal with the same fears and worries as anyone living in Port-au-Prince. Personal robberies are commonplace, so I rarely go anywhere unaccompanied. Traffic is always a problem, and demonstrations in the streets can turn violent, yes, even close to our nice neighborhood.

When fuel prices rise and the municipal electrical company doesn’t provide power, sometimes we risk sitting in the dark without fans to cool us. And keeping the refrigerator full and running isn’t always a reality.

Once, after returning from the supermarket, I looked at the selection of produce, meats, milk and cheeses, and I proclaimed: “Nou riche!” We are rich!

A week later, when we were waiting for the next trip to the store and eating cornmeal with cooked vegetables, I jokingly said, “Nou pov.” We are poor.

I accompany and am accompanied by people who remember their nation’s history — of slavery and revolution. Who remember dictatorships and militant armed groups that kidnapped and killed on a whim. Who have friends and relatives who still have empty cupboards and who drink water from dirty rivers.

I love and am loved by the strongest, most hospitable people I’ve known.

I came to Haiti to help, and each day, I am one step closer to the abundant life we’re promised. Because even while they do without too often, the people of Haiti are grateful, hopeful and know the wealth of faith and family.

I, too, am grateful for all that you give in prayer and financial donations to support my ministry here in Haiti. I invite you to come and be a part of it.