Make A Donation Click Here >
Home › What We Do › Where We Work › Co-workers › In Rural Haiti, the Garden is Life and Livelihood

It’s worth noting that in the Genesis of God’s creation, before God regulated the sun and the moon and the stars, God planted the first garden:

Then God said, ‘Let the land produce vegetation: seed-bearing plants and trees on the land that bear fruit with seed in it, according to their various kinds.’ And it was so.
— Genesis 1-11

The garden, as I once heard a Haitian farmer tell his neighbors, is where God began the world. And to the Haitians I know, almost to a one, the garden is what gives us life.

As it turns out, telling the story of what is going on with our sisters and brothers in Haiti translates quite well. Our cultures are so different, even our cultures in different parts of the United States, but, well, when you get right down to it, assuring that everyone is able to live a dignified life is very much the same anywhere.

Since mid-September, I’ve been able to travel around many parts of our own country, and I’m still visiting churches along the East Coast. My dear colleague and friend Fabienne Jean was chosen as one of our denomination’s International Peacemakers. And like the other 10 Peacemakers, she is well-suited to the work. Together we traveled from Los Angeles to Eastern Oregon, all the way back across the country to Eastern Virginia, and then to my home region —and Fabienne’s adopted home region — the Shenandoah Valley of Virginia.

Along the way, Fabienne told the stories of farm families making do without their land. Whether by hurricane or drought, or by land-grabbers or vast food importing, thousands of families aren’t able to remain on their land for several seasons — or even forever — because natural or corporate forces conspire against them.

And through telling these stories — at first alongside Fabienne, then continuing alone on my regular visits to supporting churches — we see eyes and hearts widening to understand the grief and pain of poverty and its causes.

“Well, we didn’t learn that in school,” one man recently said. I had told the story again about how while they still were slaves, the Haitians beat the French army through revolution.

And two decades later, while this then-brand-new, first black free republic attempted to turn its verdant plantations into wealth for its people by finding other nations with which to trade, the French returned with warships and forced the tiny country to “pay” France 91 million francs for financial losses the revolution cost the wealthy European nation.

That would be about $21 billion U.S. dollars these days.

And though it took more than 120 years and left Haiti’s coffers depleted, the people and government of Haiti paid the sum to France.

Still burdened with debt and still undeveloped well into the 20th century, within two decades Haiti would fall under brutal dictatorship that only ended in 1986.

When we tell Americans these stories, we see eyebrows raise, angry expressions form and tears fall.

Today, as they did throughout their ancestors’ lifetimes, the people of Haiti depend on the land to survive. They are right back in the garden where the world began. 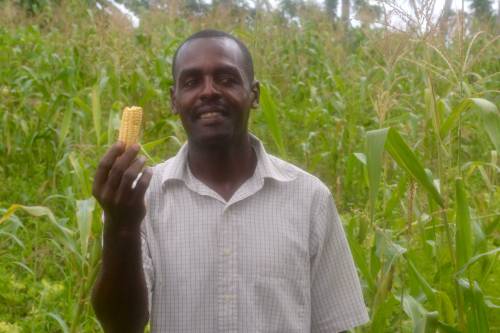 Edouard Joel holds up corn from his garden, the first crop after Oct. 4, 2016, when Hurricane Matthew destroyed farmland across his community of Torbeck and much of the rest of the South of Haiti. Owning a garden to produce their own food is a dream of most rural Haitian people. (Photo by Cindy Corell)

And those who work with FONDAMA, our network of farmer organizations, simply want to have unencumbered ownership of their gardens and opportunity to till the land, plant the seeds, harvest the crops, provide food at their family tables and sell the extra at market.

The 200,000 farmers who are members of FONDAMA and its organizations are fighting for their land, but it’s a slow and complicated battle.

The root causes of Haiti’s poverty all have to do with taking away the land — land-grabbing, the effects of natural disaster and the devastating competition cheap food imports pose to local produce.

These past weeks of speaking before congregations and other groups have encouraged Fabienne and me. We are grateful that Presbyterians are listening to the story of Haiti’s history and the strength and courage of the Haitian people.

Reflecting again on Genesis 1, I’m reminded that the universal desire of us all is to be able to make a life and a living from God’s gifts and goodness, to care for our families and to care for our neighbors.

I thank you for your continued support — prayerful and financial — and I ask you to keep the people of Haiti in your prayers and thoughts. Your gifts make it possible for God’s people to fight for justice as they continue to yearn for economic freedom.

Our prayer is that our gardens are protected, and that all gardens prosper.

We near the close of 2018 inspired by the hope of Christ. God is transforming the world, and you are helping to make it happen.

Thank you very much for your support of our mission co-workers. The prayers and financial gifts of people like you enable them to work alongside global partners to address poverty, hopelessness, violence and other pressing problems in the name of Jesus Christ.

Every day, Presbyterian Church (U.S.A.) mission co-workers are blessed to be able to walk alongside their brothers and sisters across the globe. Listening to each other in faith and in friendship, they learn from each other how to work towards a world in which everyone flourishes. Acting upon what they discover together, PC(USA) mission co-workers and our global partners strengthen the body of Christ.

Because you are an integral part of God’s mission, I invite you to become more deeply committed to Presbyterian World Mission. First, would you make a year-end gift for the sending and support of our mission co-workers? The needs in the world are great, and World Mission is poised to answer God’s call to serve others.

I also invite you to ask your session to add our mission co-workers to your congregation’s prayer list and mission budget for 2019 and beyond. Your multi-year commitment will make a great difference in our involvement with our partners. The majority of our mission co-workers’ funding comes from the special gifts of individuals and congregations like yours, for God’s mission is a responsibility of the whole church, not a particular area of the church. Now more than ever, we need your financial support!

In faith, our mission co-workers accept a call to mission service. In faith, World Mission, representing the whole church and you, sends them to work with our global partners. In faith, will you also commit to support this work with your prayers and financial gifts? With hope and faith, I await your positive response!

At God’s service and at your service!