I was fortunate to participate in the annual La Gonave Haiti Partners conference in late July in Fernandina Beach, Florida. I traveled to Florida from Haiti with two priests and a doctor who each serve the St. François Episcopal Parish on the island of La Gonave. About the same time, Presbyterians, Episcopalians, Methodists and Anglicans whose churches partner with the Haitian parish were flocking to the small beach town to learn more about how to help one another.

This partnership is unique because of the number of institutions committed together. On the U.S. side, 19 congregations participate, and in Haiti, 10 churches, 10 schools and a number of other ministries are part of the partnership. At the heart of it, though, it is about friends helping friends. 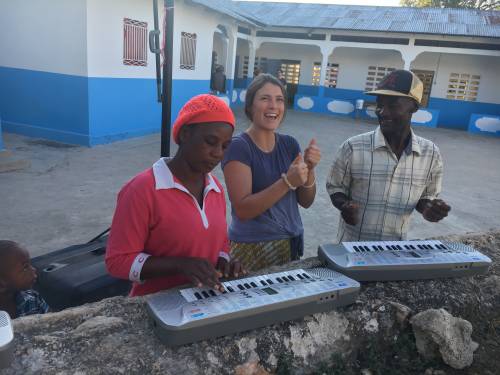 Some of my favorite times are when I accompany church groups visiting their partner communities on La Gonave. In January, I traveled with a delegation from First Presbyterian, Clarksville, TN, to Boïs Brule, high in the mountains of the island. We walked from house to house, being welcomed by local families and invited to visit. Members of St. Jacques Episcopal Church welcomed us to sleep in the adjacent school of the same name. They prepared meals for us over an open fire.

And we shared games, music, laughter, and yes, our faith in God.

But in the weeks before, as I prepared to leave Port-au-Prince with my Haitian friends, I was feeling the stress of the world.

You might be feeling it, too. We are living in hard times. It certainly is not confined to the small Caribbean nation of Haiti. But since July 2018, that sensation of being squeezed hasn’t often let up.

Bad news seems to come out of everywhere in Haiti. The government’s deep corruption is in the headlines every day. While the unrelenting political insecurity translates into personal crime on the rise, the economic situation is throttling the average Haitian. Inflation rises in double-digits, and the country’s currency is losing value at an astounding rate. When I moved in Haiti 2013, 43 gourdes equaled 1 U.S. dollar.

Today it is between 90 and 93 gourdes to the dollar.

Some regions in the north and along the coastal areas in the Nippes department suffer from recurrent drought, so the price of local food is increasing, and the cost of imported foods also is nearly out of reach for local families.

Each morning, I click through online news sources — and little of it is positive.

So, maybe that’s why Sunday’s worship service in Fernandina Beach lifted me so. After two full days of partnership reports, updates and casting a new vision for the future, we worshiped at First Presbyterian Church, whose congregation had hosted the conference.

Pere Madoché Vil, who serves the St. François Episcopal Church on La Gonave, delivered the sermon. He spoke about the passage from Luke in which Jesus tells his disciples a story of a man knocking on his neighbor’s door to borrow bread for an unexpected visitor. The neighbor tells his friend he will not get up because he already has retired to bed.

And yet, Jesus tells the disciples that when the man persists, he gets what he came for — bread to feed his guest.

Our neighbors in Haiti routinely suffer from lack of resources. Before the 2010 earthquake and since, hunger has been the norm. With the double and triple blows of a devaluing currency, exorbitant inflation, drought and the effects of climate change making the vulnerable country even more susceptible to natural disasters, more people are hungry for longer periods of time.

It feels like stress heaped upon stress for those already on the margins, and it can become discouraging for those of us who walk beside them.

I still was reflecting on Pere Vil’s message while we sang “How Great Thou Art” and the organ and trumpet accompaniment along with our voices filled the sanctuary.

It was in that moment that I remembered the power of worship in community, with our brothers from Haiti and so many Presbyterians who have traveled there, and others who are ready to join in. The tension to which I’d become so accustomed began to ease. None of us are doing this work alone, even if it feels that way when discouragement sets in.

The antidote to stress and fear is faith. I had been caught up in the bad news of the world, only to be reminded that the Good News was right around the corner. And sharing that Good News — across cultures and language and circumstance — makes it even more beautiful.

We will persist. We will continue to knock on doors and walk with our sisters and brothers. And we won’t give up.

Indeed, these are difficult times. It helps enormously to remember that faith was made for times such as this.