Make A Donation Click Here >
Home › What We Do › Where We Work › Co-workers › Helpless Isn’t Hopeless: Taking a Cue From the People of Haiti

God is our refuge and strength, an ever-present help in trouble.
Therefore we will not fear, though the earth gives way and the mountains fall into the heart of the sea, though its waters roar and foam and the mountains quake with their surging.

It wasn’t supposed to be this way. This was going to be a busy year with big plans and a lot of activity accompanying the people of Haiti toward a better future.

Presbytery of the James planned to send a group to visit with FONDAMA (Hand to Hand Foundation of Haiti), the sixth consecutive visit with the network’s leaders and organizations. Within that delegation were four members of a Virginia church already planning its full-on partnership with a rural community in need of a healthy water system.

Then in March, FONDAMA and Presbyterian Hunger Program were set to introduce Presbyterians to the organizations’ work and how together we advocate for a better reality.

More groups were scheduled for later in the year. More solid partnership work was to be carried out. It matters so much for Presbyterians to hold the hands of those on the margins.

It all changed in February.

Since its birth in 1804, Haiti has struggled against mighty odds. The Haitian Revolution pitted slaves against their French masters, and through grit and savvy, the slaves won and turned this land into the first free black republic. Soon after, the rest of the world refused the former slaves entry into the economic system of exporting its plentiful crops of sugar and coffee. An island country that made the French wealthy was throttled economically, and in its efforts to govern itself, Haiti became a nation of greed over goodness. Leaders named themselves kings — took from the coffers at will — and workers of the land became enslaved by the drastic poverty. They broke their own shackles, but freedom was in name only.

By 1825, under threat that the French would reoccupy Haiti, President Boyer agreed to pay France $91 million francs — by today’s standards, more than $20 billion. Haiti paid off the debt in 1947 and has never recovered economically.

The contemporary version of such corruption is known as the Petro Caribe scandal, in which $3.8 billion handed over to the government after the 2010 earthquake is unaccounted for. The funds were part of an agreement in which public projects intended to build up the country’s economy were tied to fuel subsidies. But the economic development projects never came to fruition, the funds disappeared, and in July 2018, the price of fuel skyrocketed.

When the protests stopped, extreme political insecurity went hand in hand with gang activity and a flood of personal violence.

In mid-February, the U.S. State Department raised the threat level in Haiti to a 4, Do Not Travel, the same designation as Iraq, Iran, Afghanistan, Yemen and North Korea.

Gangs have taken over neighborhoods, forcing business owners to pay so their enterprises aren’t destroyed. University students have been raped, and several Haitians have been kidnapped.

The few remaining United Nations security forces will leave in October, and already in that vacuum there is a certain lawlessness across the country. Haiti National Police has thousands of officers on patrol, but they are no match for thieves on motorcycles who move quickly, can pull a gun, grab a wallet and phones, and often shoot to kill.

In May alone, assassins or bandits killed five police officers. More than 20 have died this year.

The Haitian gourde is losing value at an alarming rate. In January, it took 62 gourdes to make a U.S. dollar. Now it takes 92.

Inflation is rising just as fast, at a rate of 17.2 percent.

The Haitian government is under fire for its unrelenting corruption, and peaceful but angry protesters taking to the streets in a call for justice draw looters and rock-throwers to the march, so violence is more common than not. When the protests turn violent, as they often do, the message is lost in breathless headlines. 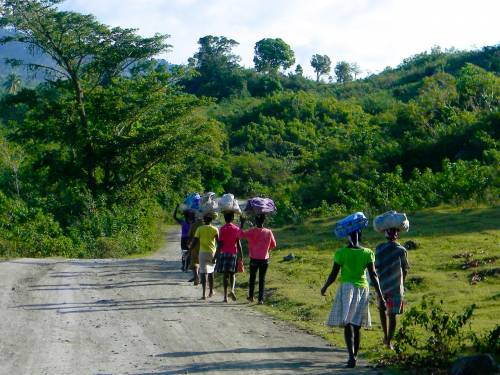 Market women make the long walk to another village to sell produce. In spite of the difficulties, their hard, daily work continues. Even as economic, political and personal security challenges rise, the people of Haiti understand that helpless does not mean hopeless, that we can never stop working. (Photo by Cindy Corell)

Though some groups continue to visit, and we who live here still travel the country, it is more dangerous. And it’s changed the way FONDAMA is telling the story of how rural Haitians fight for a better life.

I keep learning that from the people of this country, the very people we come to accompany. The people on the margins teach me how to keep working toward that better future.

In our work in FONDAMA (Hand to Hand Foundation of Haiti), the Joining Hands network in Haiti, we are engaging a different kind of bandit. This network of farmers organizations looks at root causes of poverty and steps in to explain, engage and defend people victimized by land grabbing, food imports and the effects of climate change.

A chaotic system of land tenure; imports totaling more than 80% of food consumed in Haiti; and regularly occurring, devastating storms and droughts all keep farmable land out of reach of Haitians. The people of FONDAMA and their U.S. partners fight to right those wrongs.

In too many cases, these enterprises mean small farms are taken out from under families who have worked the land for years.

Having a title to land is rare, and in some cases, the families have built on land that does not belong to them. But often, the families work hard to pay taxes in an effort to own the land legally.

No matter. When multinational corporations or local companies want a wide swath of land, these families are displaced.

There are all kinds of bandits these days, and not all of them are local.

One way of accompaniment is to invite U.S. Presbyterians to spend time with rural families. Together they visit farms, take note of drought conditions, hold the hands of those who have lost loved ones in a hurricane, encourage those who are able to grow vegetables in spite of the odds.

When groups are unable to visit, the work becomes even more difficult. Now we must take a long look at a different kind of accompaniment, praying and working from afar, rather than being there in person, trusting that we can stay in the fight even when delegations aren’t able to visit.

This is when you remember why we are doing this work, this mission, this service, this accompaniment. Because Jesus said, “love your neighbor,” even when your neighbor’s life is ever more difficult in spite of all your efforts.

Because we remember that helpless doesn’t mean hopeless.

Scripture is filled with such stories, the ways when all seems lost, faith steps in and holds us tight.

But I don’t rely just on scripture for those stories.

In spite of these circumstances — perhaps because of them — the people of Haiti persevere. You could say they have no other choice, but I don’t believe that.

Since their ancestors beat the French army in the Haitian Revolution of 1804, the people of this country have fought for a better life. From the outside, it might appear they will never win, but I don’t believe that. And neither do you.

You have supported our ministry by supporting me as a mission co-worker, financially and, more importantly, prayerfully. In spite of all obstacles, we know that justice will be won.

Yes, the bandits are running amok in Haiti — in all forms — and yes, we might often feel helpless.

But helpless is not hopeless. Our hope is in the Lord our God.

I thank you for being with all the people of Haiti and me through all of the trials as we await the victories.