I have so much to tell you that I don’t even know where to start. We have reached the end of March, and here in Haiti like in many places around the world — perhaps in your neighborhood — we are a little out of breath. It’s been a busy year.

The first inkling of the partnership came when the church’s mission committee invited me to offer guidance. That was in May 2016. In early January 2019, when members of this church visited the mountaintop community of Bois Brule to share food and prayer and to make memories and plans, we knew God was in the midst of it all.

And that, my dear friends, is when we celebrate. These connections encourage the challenging work of accompanying those on the margins, especially when circumstances suddenly change for the worse.

That’s what happened a month later. You might have seen the news reports. Heavy protests shut down most of Haiti for 11 days in February. Starting Feb. 7, the second anniversary of President Jovenel Moise’s inauguration, demonstrators were in the streets. They carried signs demanding that the president step down, and they loudly cried out against corruption. Some carried empty pots to express their hunger, held rocks to express their anger.

Inflation grew at a rate of 17% in February. Between that and the devalued currency, basic food in the street markets was out of reach for most families.

They couldn’t pay for school for their children, and livelihood was more difficult every day.

And about the same time, a government commission released a major investigative report on the PetroCaribe funds — $3.8 billion given to the government and mostly unaccounted for since 2005 — naming high government officials, including President Moise.

Protesters blocked streets with burning tires and cement blocks, fuel and water trucks couldn’t deliver, stores were closed, and many people ran out of food and water. The state electrical company cut power because it didn’t have fuel to run its systems. Cell phone companies as well were struggling to keep fuel in their towers, so service was limited.

Though I never feared for my own safety, I worried about people I love. Friends were in danger every day. When someone left my house to search for food or water, I didn’t breathe easily until they returned.

It was a miserable 11 days.

My role was keeping people abreast of what was going on and, as best as I could explain, why. When the security situation worsened, I left Haiti to spend a week in the Dominican Republic. I was growing concerned that we wouldn’t be able to find food and drinking water for the household.

By March 6, I was coping with the heavy stress and mourning, entering into Ash Wednesday with symbolic ashes. I’ve learned that in this culture you cling to one another, and my friends and I have done just that. We continue to do that. In my household, Garry, hired on as a guardian who has become our dear friend; Nadia, who lived in a small house on the property I rented but who now is our spiritual leader; and her son Didy, our teenager, because every home should have at least one. 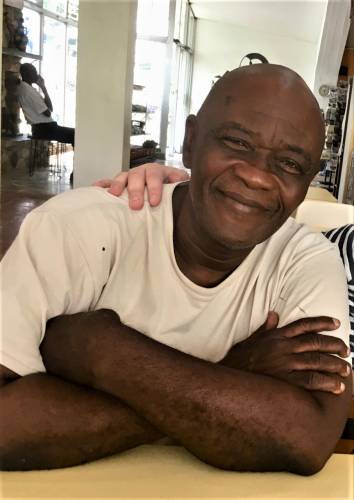 Then on March 9, Zo wasn’t there anymore. We have mourned Zo by weeping and telling stories and comforting his family. We have done this slowly, encouraging the sorrow, steeping in it even. When we forget, and someone says, “Let’s call Zo,” the rest of us share that moment. There will be many of them.

And all of this — the wonder of new friendships like with the churches of Clarksville and the people of Bois Brule, the frightening reality of danger and hunger from February and the loss of our Zo — reminds me that this season of Lent has purpose.

It is good to steep in our sorrows for a bit, to feel the fear and pain and hunger of others.

It is essential to take the slow walks with sisters and brothers, even if their ways seem foreign.

It is wholesome to do all of this in community, in fellowship with others. You cannot truly walk with others if you do not feel the rock in their shoes.

Haiti has taught me this. I am so grateful. We are moving forward slowly in our work, still hamstrung somewhat by the dangers of traveling and more constant paralysis of business.

Through our Joining Hands network FONDAMA, my colleagues and I are gathering the stories and energy of our rural farmers to press both the U.S. and Haitian governments to better serve them.

Through our partnerships, we are pressing to bring Haitians and Presbyterians together to walk alongside each other and, with combined skills, to solve problems.

Thank you all for your generous and faithful support of our ministry here. Your prayers and financial gifts encourage us to continue our work, even as the political and economic situation grows more challenging. Our sisters and brothers here often ask about you. They give thanks for you and keep all of us in their prayers. Indeed, we are so much more effective together.

And we always are seeking guidance from God and our Savior Jesus Christ who walks with us all. This is the season of Lent, after all, which always is followed by Easter. Even as we ache and endure, we are encouraged by the promise of our Risen Lord.