Make A Donation Click Here >
Home › What We Do › Where We Work › Co-workers › What are you Doing to Help Us?

They gathered as they always do, fewer in number than usual. They’d heard that the blan, what Haitians call a foreigner, was back in town. They wanted to tell their stories. Again. And I was ready to hear them. Again.

An older woman wearing a housecoat, flip-flops and a crocheted cap looked more tired than ever.

A farmer who arrived late wore a white cowboy hat that he took off when he greeted us.

Monsieur Pierre grinned when I remembered his name.

And Josette Joseph, who explained that the granddaughters she usually brings were in school.

Castin Milostene set up the meeting near the town of Trou du Nord on short notice for us. I was in the Northeast of Haiti to visit with landless farmers, men and women who have lost their land to encroaching plantations and an industrial park. 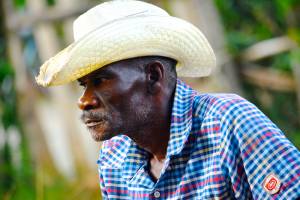 Castin is the assistant coordinator for the National Congress of Papaye Peasant Movement, the most broad-based peasant organization in Haiti. The movement includes more than 100,000 Haitian farmers and hundreds of smaller, local farmer organizations. Castin’s own organization concentrates on protecting the environment, but when farmers in the Northeast face critical issues, he is there to help organize them—and to listen.

So what does all this mean for Presbyterians in the U.S.? I serve as a companionship facilitator with the Joining Hands network in Haiti. Joining Hands is an initiative of the Presbyterian Hunger Program (PHP), bringing Presbyterians together with people in developing countries to advocate for our brothers’ and sisters’ needs around the world.

And in Haiti the network known by its Creole acronym FONDAMA (Fondasyon Men A Men Ayiti, or Hand to Hand Foundation of Haiti) advocates for families in rural parts of the country.

Or, rather, will advocate for these families.

For various reasons, all of them valid, FONDAMA has been slow to reorganize after providing disaster support after the 2010 earthquake.

This is not lost on the dozen residents who waited for us late one afternoon in mid-September.

Valery Nodem, the PHP associate who works with Joining Hands, was with us. He listened to the farmers as they explained how, in September 2013, a band of men showed up to rip the trees out of their neat, grassy yards. Next the men plowed over their gardens, broke down their small houses, chasing away their livestock and shoving them off the land. Some of them had begun the legal process to purchase the property.

None of that mattered. A corporation called Agritrans SA had begun plowing the land once occupied by 800 families to create a plantation to grow bananas and other produce.

After hearing Valery thank them for their courage and explain the vision of FONDAMA, the farmers had questions. The first one was for me. Speaking in Creole, one man looked me in the eye and asked, “You have been coming here for a long time, hearing our stories. What are you doing to help us?”

His question put me on the spot. It put FONDAMA, which I represent, on the spot. And it put everything into a very important perspective.

For more than two years I’ve worked in Haiti, learning Creole, networking, meeting people in our network’s organizations, and discovering the slow way of doing business here. For the most part I’ve deferred to the Haitians we work alongside. I am here to accompany, not to push.

To an American audience I would have responded that these things take time in a place like Haiti. I would ask for patience.

But right there all I could say was that I understood their frustration. I assured them I would continue to listen to them, share their stories, and work alongside the board of FONDAMA to further investigate their situation and advocate for compensation for their losses.

When we enter into another culture with all our good intentions and prayerful planning, sometimes we forget the people who are at the heart of our “work.” We take their stories and their pictures and align with local movers and shakers seeking to make the difference that is so urgently needed.

But by coming back and seeing the same faces, I am more and more determined to see that difference come sooner rather than later.

After losing their land, these families scrambled to find property to grow crops to feed their families and make a bit extra to send their children to school.

Some live with relatives, burdening other families who struggle to live.

Josette Joseph moved her two granddaughters and her 90-year-old mother into a tiny USAID-built house. She struggles to raise the $25 (US) a month needed for expenses.

They continue to struggle against the injustice they face. They aren’t asking for handouts. They are fighting for justice.

FONDAMA is close to finishing their difficult reorganization process, bringing in a new coordinator and building an awareness and advocacy campaign to improve the lives of these men and women and hundreds more like them. They deserve agrarian reform that gives them fair title to land, protection from unfair land acquisition, and help in growing and harvesting produce for market.

FONDAMA and the Joining Hands networks in Peru, El Salvador, India, Sri Lanka, Bolivia, Cameroon and the Democratic Republic of Congo need your help. We need your prayers, your interest in our campaigns and your financial commitment.

Joining Hands is about more than just bringing projects into challenged regions of the world. It is about accompanying people in each culture who are working to change their circumstances.

It’s about listening—really listening to people—especially when they trust you enough to ask: What can you do for us?

Sometimes it’s when the people we accompany ask questions like that that we realize a true partnership has begun.

I thank you for your continued prayers and financial support. Please remain with us as we work together with these families.