May 5, 2017 — We take turns saying grace before every meal in our house. And by our house, I mean the rented house where I live here in Port au Prince, Haiti, with Armand, our guardian who provides security at the house, and Paul Sinette, who cooks, cleans and makes sure I use my Creole correctly. Also at our table on any given day are friends who happen to stop by or even tradesmen doing work at the house.

As we prepare to eat, we glance at one another to see whose turn it is. Each prayer ends with, “And please, God, help us to remember that not everyone has the opportunity to eat today.”

It reminds me at every meal what a privilege it is to eat when I’m not hungry.

I spent my first full month in Haiti living with the Celestin family in Cherident in the southern mountains. They became and remain MY family, and the lessons I continue to learn with them remain. Luc Celestin and his wife Malia raised eight children. Malia died in 2008.

After the five oldest of her children moved from Cherident to Port au Prince, some to study at university and others to work, Malia called each one each day. “Did you eat today?” she would ask. Sometimes, one or more of her children would say, “No.” And when that happened, Mama Luc, as she was called, would not eat that day either.

“We finally started not to tell her the truth,” her son Herns told me. “We told her every day that we had eaten.”

In Haiti, an important way to say “I love you” is to ask if someone has eaten.

After hearing me ask visitors to my home if they were hungry, a friend once cautioned me,
“Just ask if they would like something to eat. People don’t want to tell you that they are hungry.”

Growing up as the youngest in a family with five children, I remember poor times. Extra money wasn’t always available, but I never remember missing a meal. Each spring, my father planted what I knew to be the largest garden anywhere, and we kids were expected to work in it.

Dad would spend hours there, hoeing weeds or checking to see if the cucumbers, beans, peas, tomatoes, onions, carrots, lettuce, cabbage, squash, watermelon and cantaloupe were ready to harvest. 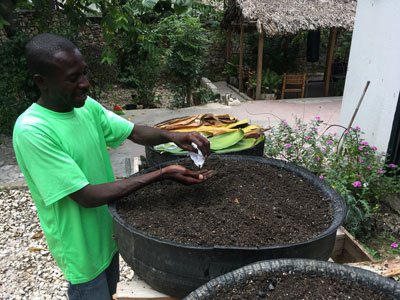 Last week, we started gardens here at my house in Port au Prince. A friend named Herve Delisma is staying with us for a few days to make sure it’s going well. Herve and other local ag technicians have spent years helping Haitians across the country create tire gardens. As tire gardens require less water than traditional planting spaces, families are able to produce food close to their homes year-round. For our garden, Harve and Armand purchased used truck tires for next to nothing, cut one rim from each, and turned them inside out. They also procured healthy topsoil, mixed it with manure, compost and charcoal, and poured the mixture into the inside-out tires.

Because of the faithful, generous support of so many people in Presbyterian churches, four years ago I was able to come to Haiti to work with a network of farmer organizations from all over this small country. In Haitian Creole, the network is Fondasyon Men Ansamn Ayiti, which translates to Haiti Hand to Hand Foundation. Primarily, we examine the root causes of Haiti’s poverty and fight those causes through advocacy and informational campaigns. In 2016, FONDAMA’s campaign was to fight food imports, for when imported food floods the market, it harms Haitian farmers’ ability to make a living. This year, we are fighting land-grabbing by corporations and foreign governments that take property from rural Haitians.

FONDAMA is also partnering with Presbyterian Disaster Assistance (PDA) to provide funds for recovery from Hurricane Matthew, which slammed into the southern peninsula in October 2016. Seven months later, families there still are struggling to survive after losing crops, livestock and homes. Similar misery is reported in the northern peninsula and other areas of Haiti.

Thanks to the generous support of congregations and presbyteries, we are able to carry on this work, even against remarkable odds. Through advocacy campaigns and small projects that create gardens and teach best practices in farming, and through prayer, we are fighting hunger today and working to prevent it in the future.

“Piti piti nap rive” is a Haitian proverb that means “Little by little, we are getting there.”

Thank you all for your generous support through prayer, financial gifts and partnership with FONDAMA.

I invite you to continue supporting our work here and to consider visiting us in the communities where we serve.

God bless you all.