Make A Donation Click Here >
Home › What We Do › Where We Work › Co-workers › So Many Surprises!

We held hands around a small table while Andre Cèus prayed. The only light in the dirt-floored room came from cell phones, their tiny lamps pointed this way and that. The smell of the steaming hot bread soup wafted about—naturally spiced with peppers and onions that grow in gardens here. The scent mixed with sweat and what remained of the clean perfume of soap on our skin. Like most days in Haiti, by evening it had seemed so long.

It was cool, there in the high mountain community, a pleasant difference from the usual heat and humidity.

“Mèsi, Seyè,” Thank you, Lord. I recognized a few more words of the prayer, thanking Him for our safe activities, for our time together, and, of course, for the soup we would spoon on flat plates, its seasoned broth and chunks of bread threatening to drip from the sides.

I felt the rough wood of the bench behind my legs. I felt rough callouses on the hands I held. 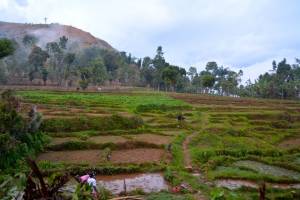 Two young girls work in a field of watercress at Dofine, Haiti. The families grow watercress between seasons of growing rice.

“Cindy.” Someone called my name. I was to serve myself first because I was a guest. Like the moment I first arrived, though, I was very much at home.

This was Dofine, a community about an hour’s drive up the mountains from Verrettes in the Artibonite Valley. I was there with my colleague Mark Hare, a Presbyterian mission co-worker who, together with agriculture technicians and communities, designs, creates and tends yard gardens. Together they learn to grow vegetables in old tires. It’s cheap and saves precious water. With tire gardens planted close to the house, a family can grow vegetables year-round.  Together they feed these families who depend on their small plots of land to live.

But it is the story of Dofine that draws me back time after time. I am the companionship facilitator with FONDAMA, a network of farmers’ organizations across Haiti. The network is one of several created through an initiative of the Presbyterian Hunger Program called Joining Hands. Our mission is advocacy, accompanying people in developing countries as they identify and campaign against root causes of poverty.

One of those root causes in Haiti is the grabbing of land by corporations from farm families. It’s happening with swift regularity. And thousands of families are losing not only their homes but also the small bit of land where they grew enough food for themselves and to sell for other needs.

And as in most poor countries, it has happened throughout Haiti’s history.

Not so long ago the people of Dofine fought off the generations-long theft of their land by a wealthy neighbor. In the ongoing fight over several years three men were killed. Others were jailed and beaten by corrupt police. Eventually the people in the region who had lost land retrieved it, thanks to the Haitian government’s strong land reform law. Unfortunately that law, INARA, though still on the books, isn’t followed. Miserably, corporations, the Haitian government and other governments intent on investing in Haiti still take land from small stakeholder farmers. And when they do, they take the only hope those families have of raising their food and having enough to sell at market. 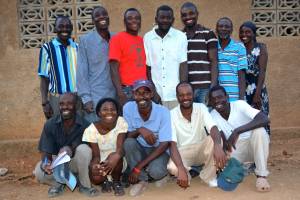 Our mission here is about advocacy. It’s more complicated than most missions our church has been carrying out for more than 175 years. It is about accompanying the poor people of Haiti, but rather than treating hunger, homelessness, the lack of health care, and other symptoms of poverty, advocacy seeks to determine its root causes. Then the network members create and implement campaigns to bring lasting change.

And, yes, it is difficult work. This is why when our network’s campaign is identified and ready to act, we will need your prayers and very likely we will ask for more help.

After almost two years I am finding the stories of Haiti that need to be told. The network of organizations is called FONDAMA, an acronym for the Creole name, Hand to Hand Foundation of Haiti. We work in advocacy—creating a campaign around an identified issue, a root cause of the poverty in Haiti.

Carefully shining my cell phone light over the tall pot, I ladled soup onto the plate and set it carefully in front of me. Andre, Merendieu, Kenold, Lucien, Hervè and others leaned over me to serve themselves. We chattered in Creole, and we made jokes. They corrected me when I made mistakes, as families do. And there, in that moment, in a place where poverty overwhelms, again I felt the richness of this place.

FONDAMA is in the process of advocating for strong land reform laws that are enforced so poor families can remain on their land. This network of organizations is up against a corrupt government and wealthy corporations heeding the call that “Haiti is open for business.”

This is hard work, this advocacy business. I am pushing myself to help people in Haiti understand how it can work. Our partners are Presbyterian churches and presbyteries. The U.S. partners’ work is to learn more about the issues and absorb the information shared about similar issues in other developing countries where Joining Hands works. And keep us all in active prayers.

Please join us all on the road to a better life for people in rural Haiti. I appreciate all the amazing support we have garnered along the way—prayers, notes, financial gifts. I tell the people of Haiti that I represent thousands of Presbyterian churches, all filled with people who have a heart for them, for this nation.

Thank you for all you have done for us, and I ask for your continued support.

Be with us. It will be a long and hungry road. But together we know we can do great things.