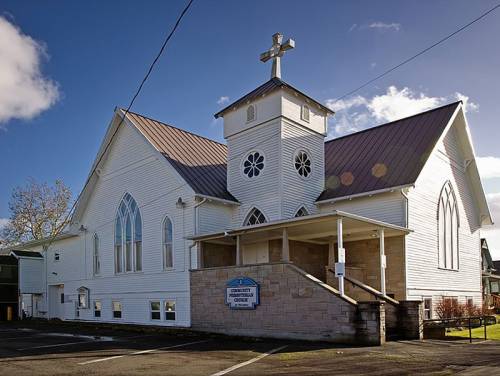 The Rev. Crawford Brubaker has served the members and friends of Community Presbyterian Church in Buckley, Washington, for weeks without actually having met them in person. (Photo courtesy of Crawford and Layne Brubaker)

The Rev. Crawford Brubaker has been to the town he pastors only once, for an interview. It occurred pre-pandemic at nighttime, in the small community of Buckley, Washington, the home of Community Presbyterian Church. At the end of the interview, Brubaker said the pastor nominating committee told him to come back in three weeks to preach so they could “see the goods.”

The Sunday before he was scheduled to preach, the coronavirus crisis was underway. With no in-person worship allowed, the pulpit supply preacher at the church began writing and sending out weekly sermons, and the church session emailed Brubaker. With donations slowing, session members were uncertain about their financial future — and weren’t sure hiring a transitional pastor was the right thing to do.

But Brubaker was longing to serve. With Holy Week coming up, he told them that he would love to help them have an Easter service via Zoom. Because he’d been doing part-time children’s ministry for a Methodist church in Gig Harbor, Washington, he volunteered to put together a children’s lesson, including video links to material they could do and watch at home.

“Truth is I was trained as a chaplain, so I’m a chaplain at heart,” Brubaker said. “When the beeper goes off for an emergency, I’m like great, I want to go to where that need is happening.”

Along with the Rev. Lane Brubaker, who pastors a new worshiping community at the Washington Corrections Center for Women, he’d already been putting together videos for online services for Hagar’s Community Church. By simply changing some narration he was able to include an Easter video as part of his first online service via Zoom for the Buckley community.

“They were so happy to see other’s faces,” he said.

After that positive experience, the church wanted to take a financial risk and hire Brubaker. But session members didn’t feel like they could pay him for a three-quarter-time position. Brubaker told them he’d be happy to serve half-time. Hearing this, the church stepped out in faith.

“I was so proud of them,” Brubaker said.

Six weeks into the experiment, which ends in June, Brubaker said the church’s financial position has improved. Setting them up with a PayPal account so that people can give online helped. As importantly, Brubaker gave them a way to be together.  On Tuesday nights he hosts a virtual dinner and Bible study, which “has been lovely,” he said. He also has a weekly Zoom hangout session, during which he answers people’s questions and finds out which members need a call or a note from him.

Brubaker said uncovering space online, where he and the congregation can get to know each other, is a way to balance his desire to meet their needs and to prevent them from being paralyzed and doing nothing. He said that because everything is new for everybody, nobody is able to say, “This isn’t the way we did things before. That gives him freedom to say, “In this time and space, we’re going to try this.”

Brubaker said that there are about 100 members on the rolls at the church and his guess is that maybe 70 had been attending worship before the pandemic.

He does know that the 127-year-old community church has some great ministries.  Church women have been making masks and sending them to hospitals all over the world, with a few ending up on a Navy ship. The church also has a backpack feeding ministry, which currently serves more than 150 students in the community.

Reflecting on how he’s gotten to know the congregation virtually first, Brubaker said he’s tried to keep two things in mind — vulnerability and laughter. That’s why one of the first things he did as Buckley’s virtual transitional pastor was to ask church members to recreate a photo from their childhood, or their ancestors. He included a photo of himself so that they would know what he was looking for.

“I love the telephone for the intimate pastoral conversations I’ve been able to have,” he said. “In this water of vulnerability, we’re swimming in, people are more open in a way to connection than if we were face to face.”

O God, may we be unsettled into action by incomplete reconciliation and imperfect peace. Use us as you transform cultures of violence into communities of peace. Amen.