Study may lead to a vaccine for HIV/AIDS

Elite controllers in Democratic Republic of Congo may hold the key 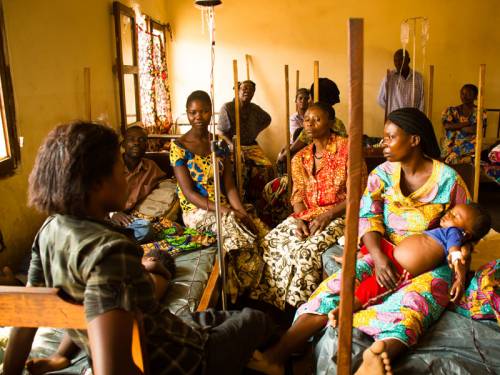 Patients at Kakenge Hospital in Kasai Central province in the Democratic Republic of Congo, near where blood samples for a recently-published HIV study were taken. (Photo by Larry Sthreshley)

For the second time in two years, the Presbyterian Church (U.S.A.) has played a role in research by Abbott Labs that may lead to a vaccine for HIV/AIDS.

“It’s kind of remarkable,” said mission co-worker Larry Sthreshley from his office in the Democratic Republic of Congo (DRC). “How many studies are done where nothing significant is found? There have been two major findings from this research.”

In 2019, Abbott Labs released research about the discovery of the first new variant of the HIV/AIDS virus in 20 years. This month, the company announced that its research in the Democratic Republic of Congo could likely lead to advancing therapies or the creation of a vaccine.

The findings were published in EbioMedicine, part of the prestigious medical journal The Lancet. The research found that an unusually high number of people who had the virus were able to suppress it with no antiviral treatment.

“The finding of a large group of HIV elite controllers in the DRC is significant considering that HIV is a lifelong, chronic condition that typically progresses over time,” said Dr. Tom Quinn, director of the Center for Global Health at Johns Hopkins University and chief of the International HIV/AIDS Research Section of the National Institute of Allergy and Infectious Diseases.

“The number of individuals with controlled HIV is four times higher here in Congo than the norm, which seems to make sense since it appears the virus started here, and people have had longer to evolve,” said Sthreshley. “One of the more positive things that happened is a lot more people ended up with ability to suppress the virus.”

Sthreshley said knowing the genetics of the people who have the virus will allow the development of a target vaccine.

He said he believes the advances made in developing a COVID-19 vaccine may help speed up the process in developing an HIV/AIDS vaccine. According to the Centers for Disease Control and Prevention, some of the COVID-19 vaccines are messenger RNA vaccines, mRNA for short, a new type created to protect against infectious diseases. To trigger an immune response, many vaccines put a weakened or inactivated germ into patients. The mRNA vaccines teach cells how to make a protein — or even just a piece of a protein — that triggers an immune response.

Dr. Carol McArthur, one study’s lead researchers, approached Sthreshley about the study when he was serving in Cameroon. He helped gather blood samples from mission hospitals, assisted the company in getting the necessary authorization to conduct the research and also linked her with the Université Protestante au Congo. Two of Sthreshley’s IMA World Health employees, Linda James and Jonathan Niles, served on the research team; both are cited in the latest study. Sthreshley is the current country director for IMA World Health.

Sthreshley said he was happy to play a small part in the research. He has seen the devastating impacts of the disease in his work in Cameroon and his 30 years serving in the DRC.

“When we were in Cameroon, a big portion of the church staff was constantly attending funerals. Our housekeeper died from HIV, someone working in our home that we saw every day. Shortly after, her husband died and we helped support her daughter,” he said. “In this environment there is no safety net. You have to get involved.”

He said he is grateful for the PC(USA)’s commitment to Congo’s national healthcare system and for prioritizing his work there.

Bountiful God, open in us a sense of abundance rather than scarcity. Bless all those who labor daily to build your realm on earth. Strengthen us to become transforming agents of mission throughout the world. Amen.