The Sthreshleys periodically visit the US and are able to visit congregations as their schedule allows.  Email them to extend an invitation to speak with your congregation or organization.

About Larry and Inge Sthreshley’s ministries

As a health liaison Larry Sthreshley assists with the development of the health ministries of churches and their role in the health system of Congo. His work involves designing and managing comprehensive health programs that work from the community level up through the ministry of health. The programs have a special emphasis on equitable health care financing, high impact interventions to reduce maternal and child mortality, and programs to address gender-based violence. Larry is seconded to IMA World Health and serves that organization as Congo’s country director. He is also the chief of party of the ASSP (a French acronym that means Access to Primary Health Care) project and chairman of Good Shepherd Hospital (IMCK).

Larry and a staff of about 30 people implement Project ASSP. The project’s goal is to work with the government, churches and the community to develop a resilient health care system that provides affordable health care and preventive services to 8 million people in five provinces of the country. The project addresses issues such as health infrastructure, primary health care, malaria, water and sanitation, vaccinations, nutrition, family planning, HIV, and gender violence. It also does some limited work in agriculture.

Read Larry’s news story: On the front lines in the battle to stop Ebola

Inge also works on the nutrition, home garden, and clean cook stove components of the ASSP project in addition to giving oversight to the Methodist Presbyterian Hostel (MPH), which is a mission guest house and small conference center. MPH provides a much needed service to Presbyterian and Methodist mission workers, national and international church groups, work teams and individuals working in partnership in Congo.

Inge’s work at the Methodist Presbyterian Hostel facilitates mutual mission between groups from the United States and Congolese partners. “MPH provides a place for people to stay as they pass through on their way to the interior of the country or as they work in Kinshasa.  We facilitate many meetings and conferences,” she says. “MPH is a place where people make connections that significantly impact their work in Congo.  It is a real blessing to many people.”

The Democratic Republic of the Congo (DRC) is a country roughly one-quarter the size of the United States. It is a land that has been ravaged by conflict. The havoc wrought by 40 years of dictatorship under Mobutu followed by multiple wars and continued pockets of militia fighting have kept this resource-rich country from developing its potential. The majority of Congo’s people struggle daily for survival. Despite these circumstances, the church in the DRC continues to witness to the Good News of God’s Word through their multifold ministries.

About Larry and Inge Sthreshley

Larry Sthreshley says “experiencing the wonder of being part of God’s plan” motivates his ministry in the Democratic Republic of the Congo.

Larry and Inge began what Larry calls “an amazing journey of mission service” more than two decades ago. “When I started, I could not even envision all that God would lead me to be involved in,” Larry says. “Over the years I have moved from helping the church manage a handful of clinics in Kinshasa to creating one of the largest church-run health programs in Africa.”

Trained in tropical agriculture, Inge works with the ASSP project and the CPK to address the problem of malnutrition through nutrition education and home gardens and through efficient and low-emission cook stoves. She has written several brochures and a book on agriculture.

The Sthreshleys appreciate Congo’s mission heritage as well as the vibrant Christian movement that resulted from those early missionary efforts. “I am very mindful that anything that we achieve in mission is building on the work of the many American and Congolese Christians in the past who were faithful to the call they received to share the good news of the gospel and gave of their time and talents to help develop the ministries of the church,” Inge says.

Their work in Congo models the long-term commitment that historically has characterized mission service. Yet both of them enable the work of Christians who come to Congo on short-term assignments. “MPH makes it more logistically feasible and possible for groups and individuals to do short-term mission trips and develop partnerships with Presbyterians here in Congo,” Inge says.

Larry says working with short-term groups is a priority of his ministry. “Often the mission groups are able to support pilot projects that I am able to turn into larger donor-funded projects,” Larry says. “Presbyterian Women have been especially active in starting and supporting projects in Congo.”

Inge studied tropical agriculture at the University of Hawaii, where she received a bachelor’s degree.

The Sthreshleys are the parents of two children, Lisa and Michael. Lisa was born at the Presbyterian-supported Good Shepherd Hospital  in Congo. 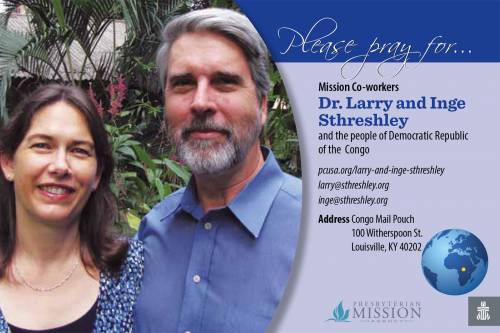 Use this card as you pray for mission co-workers Larry and Inge Sthreshley. This card includes a photo and overview of their work. Larry works…

Give in honor of the ministry of Larry and Inge Sthreshley