A tidal wave of green is growing in Peru 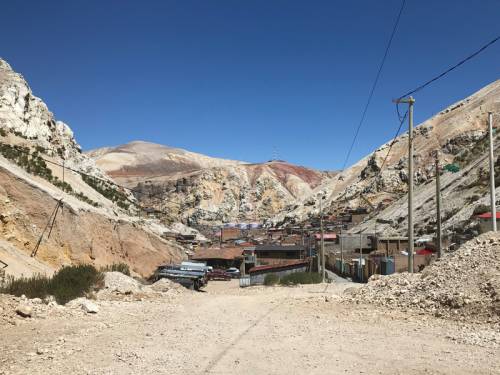 Decades of toxic emissions from a nearby smelter in La Oroya, Peru, have caused acid rain that has burned the hillsides. (Photo by Jed Koball)

La Oroya, Peru, is one of the most contaminated places in the world. Poisoned by the emissions of a U.S.-owned metals smelter, nearly 1,000 miles of surrounding land is contaminated as much as 4 inches deep with lead, cadmium and arsenic.

Despite the fact the smelter has not operated at full capacity for over a decade, more than 50% of La Oroya’s children have extreme levels of lead in their blood.

But among the acid-rain, white-washed tracts of rockface 13,000 feet above sea level in the Andean mountains, the largely infertile lands are experiencing a tidal wave of green.

With the help of mission co-workers, the Joining Hands Network, Presbyterian Disaster Assistance (PDA) and the Presbyterian Hunger Program (PHP), a small group of seniors who call themselves the “Conservation Committee of Villa El Sol” developed a simple plan: plant trees to restore life.

With shovels and picks, they tilled the land. More than 20 years later, they have planted more than 30,000 trees and cared for them daily, season after season, often watering them by hand using recycled 2-liter soda bottles.

In the short term, the project will facilitate better growth of the trees being planted on the hillside. This will bring stability to the land to help prevent mudslides while also keeping water in the soil for planting. Once terraces are more firmly established, native plants can be utilized to remediate contaminants from the soil.

In the long term, the land will not only be adapted to climate change, but it will also become fertile for local food production. At present, food must be shipped into the area because contamination prevents the growth of produce.

Because of its immense biodiversity, economic inequality and decaying infrastructure, Peru is considered one of the three countries in the world most vulnerable to climate change. Having responded to massive flooding, mudslides and displacement due to unprecedented rains near the coast of Peru, Red Uniendo Manos Peru (Joining Hands Peru) knew that the long-term struggle against climate change in Peru must focus on retaining water in the mountains.

PHP, through its Joining Hands initiative, has long supported the organizing work in the community. Much of it has focused on calling for an environmental health policy to address the contamination in La Oroya. Through years of advocating for specialized health care, the enforcement of environmental policy and the remediation of lands poisoned from decades of mining activity, it became clear that the community would have to take on some of the work itself. This led to the idea of bio-remediating the land — introducing microorganisms to consume and break down environmental pollutants.

PDA became involved following the 2017 mudslide, which was attributed to climate change. While climate change has long been a concern of the community, it became apparent that urgent action was needed to adapt the land to changing weather patterns. The community, with the help of Red Uniendo Manos Peru, applied to PDA for a grant to facilitate the ongoing re-forestation work in Villa El Sol by building an irrigation system.

World Mission has accompanied the community through the presence of mission co-workers like Jed and Jenny Koball now serving in Peru, as well as visiting churches from the United States, some of whom have gotten their hands dirty in the re-forestation efforts.

“More than anything, mission co-workers have provided encouragement to the community to continue its advocacy work,” said Jed Koball.

Koball said the hope is that the project will demonstrate what is possible in other parts of Peru also affected by mining contamination.

“While the community is taking on this work with the support of Red Uniendo Manos Peru, PHP, WM and PDA, the work on a larger scale is really the responsibility of the State and the mining companies that have allowed for such contamination to take place,” he said. “In this way, the project becomes part of the ongoing advocacy work for environmental health policy in response to mining contamination.”

Great God, bless the hearts and hands of those who work in your name. Bless those they help, those with whom they travel, those who host them and those who hear their stories. Give us heart to live as witnesses in all the places where the presence of faith shouts hope despite all the chaos of our world and its disasters. Amen.