When Maria’s husband became increasingly violent toward her, she left her home and sought refuge in a safe place. What she never dreamed was that he would also exercise violence against her legally, through gaining custody of their two sons and filing for a restraining order to bar her from her home and the business she built with him. Homeless, Maria returned to the congregation she had stopped attending when she got married 18 years earlier; she was welcomed back, and a church family offered her shelter in their home. Her story is only beginning, as she heals and finds the courage and stamina to challenge the system and regain access to her sons.

I heard Maria’s story recently in Mexico, at a worship for women church leaders who are learning one another’s stories and preparing a special liturgy on violence against women. Allow me to back up a bit. 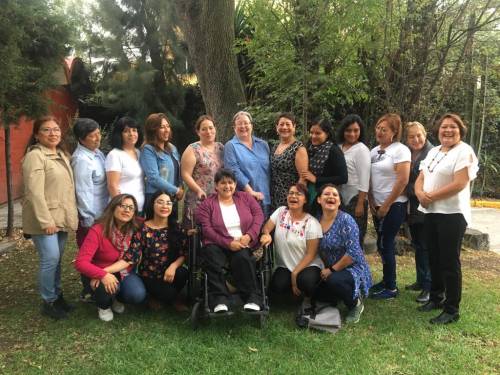 Participants in the Women’s Network Free in Christ.

In May I began to get to know our partners and colleagues in Mexico: the Theological Community of Mexico and the Mexican Communion of Reformed and Presbyterian Churches (CMIRP). The seminary has a good library, excellent professors and serious students from different denominations, particularly from Protestant, Pentecostal and Anabaptist traditions. The CMIRP is made up of 11 congregations that separated from the National Presbyterian Church of Mexico when the latter severed ties with the PC(USA) over longtime issues of disagreement, especially ordination of women as deacons, elders and pastors, as well as ordination of people who are part of the diversity of sexual expression. The CMIRP is a member of the Alliance of Presbyterian and Reformed Churches of Latin America and is in the process of being accepted into the World Council of Reformed Churches.

On the first visit, I was invited to return in late May to share in a three-day workshop with the Red de Mujeres Libres en Cristo, the women’s network of the CMIRP. The network chose the name “Libres en Cristo/Free in Christ” because Christ sets us free and empowers women in all ways. One woman from each of the 11 congregations that form the CMIRP came together with other women leaders of the denomination to learn, share and prepare a liturgy that will be celebrated throughout Latin America this month on the Día de Oración por la Mujer Latinoamericana: Day of Prayer for the Latin American Woman. The Day of Prayer for the Latin American Woman calls on the Reformed Latin American and Caribbean family to celebrate women’s lives of dignity, to denounce the violence and death to which many sisters are subjected, and to reaffirm the commitment to the gospel for all people. 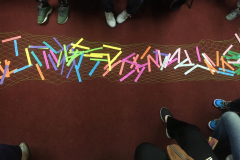 A fishing net symbolizing the Women’s Network holds colorful pieces of paper, each of which bears the name of a woman from a congregation or community of the Mexican Communion of Reformed and Presbyterian Churches.

Because many events I attend rely on outside leadership, I found it heartening that virtually all of the people who made presentations, led daily biblical reflections and facilitated the group activities came from within the congregations of the CMIRP and the Women’s Network Free in Christ.

As we women worked together in our different sessions, we learned about biblical passages that have been used to exclude, harm and even cause violence to be used against women — in the context of the larger society, the church and the home. We learned about Mexican laws addressing violence against women, including human trafficking and femicide; we learned about services and institutions that can help women facing violent situations; and sadly, we also learned about the many ways in which the laws are not upheld and are sometimes even used to perpetrate further violence.

Finally, we learned about women in the Bible who, like Tamar in 2 Samuel 13, also suffered violence, often at the hands of husbands, fathers, brothers or other relatives, and certainly from a system of discrimination in a society that considered a woman less than a full person.

Your support through prayers and financial gifts helps make it possible for me to accompany and learn from the work of the Women’s Network Free in Christ in Mexico, and to accompany the work of the CMIRP and the Theological Community of Mexico as well. Thank you for your ongoing prayers and support for these important ministries and for my work with them.

Lord, help us to find ways to support our neighbors as they seek to live the lives that you envision for them. Amen.