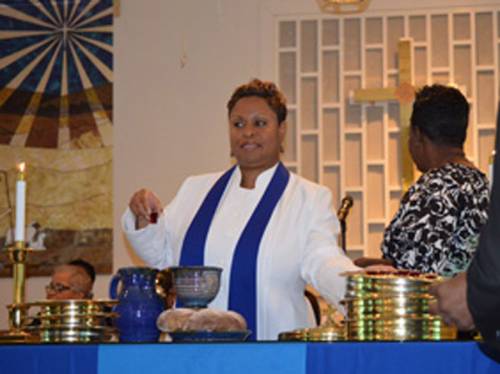 During her nearly nine years as pastor of Washington Shores Presbyterian Church in Orlando, Florida, the Rev. Erika Rembert Smith has placed the Great Commission at the front and center of her vision for the congregation.

Now that the church has joined the more than 70 congregations and mid councils to embrace the Matthew 25 invitation, Smith sees efforts to “make disciples of all nations” bearing fruit.

“I see Matthew 25 and the Great Commission going hand in hand,” she said. “We are trying to move beyond the walls of the church and engage the community around us — because when we do, we see the needs of the people.”

With about 120 members and 70–75 people in worship on the average Sunday, the Washington Shores church has identified building congregational vitality and dismantling structural racism as its two Matthew 25 focus areas.

Church members seek to serve their neighbors even as the neighborhood is changing, Smith explained.

“It used to be a neighborhood where African American educators and other professional people lived,” she said. “As those people have passed away, the neighborhood began changing like many other urban communities have changed. Now there are more renters and more households where a single mother is raising her family. There is an elementary school next door to us and two low-income communities around us. There is a need for the kinds of resources we provide.”

Last year, the church teamed with voter education groups to talk about the November ballot issues including Florida Amendment 4, a voter-approved initiative to restore the voting rights of Floridians with felony convictions. Not only did church members collect signatures for the initiative, they organized and hosted a forum on the various ballot questions, Smith said.

“We didn’t tell folks how to vote,” she said. “But it was an educational opportunity, and so we invited folks in for that. We received people we wouldn’t normally see on a Sunday morning.”

Measures designed to boost congregational vitality include involving youth as worship leaders and inviting them to sing in the youth choir. “We find ways to engage youth in worship so they aren’t pew-sitters — they are worship leaders,” she said. “They usher once a month. They lead liturgy, pray and run the PowerPoint in worship.”

Many members say that “church was the place we gained our ability to speak in front of others with confidence,” she said. “We are trying to instill that in our youth as well, and we have witnessed them blossom.”

Washington Shores Presbyterian Church has partnered with Hope Presbyterian Church at Lake Nona, Florida, in order to, as Smith put it, “build an intentional community in which we address the issue of racism.” Hope’s members were “talking and wondering what to do” after the July 2016 shooting of Philando Castile, a 32-year-old black man, near St. Paul, Minnesota.

Smith and Hope’s pastor, the Rev. Nancy Graham Ogne, began meeting monthly for breakfast, and then, slowly, “we began taking our congregations along for the journey.”

Activities the congregations have engaged in together include reading the Rev. Dr. Martin Luther King Jr.’s “Letter from Birmingham Jail” and “America’s Original Sin: Racism, White Privilege and the Bridge to a New America” by Jim Wallis. The two congregations also joined to tour the Harry T. & Harriette V. Moore Cultural Complex in Mims, Florida. The Moores are credited with being civil rights pioneers in the Sunshine State.

“We are trying to find ways to live out our vision,” Smith said, “and we’re doing things to attract people who would not necessarily come through the doors of the church.”

Gracious God, we thank you for those who look beyond existing solutions to forge a new path to new life. We ask your blessing on the people and their work. In Jesus’ name. Amen.