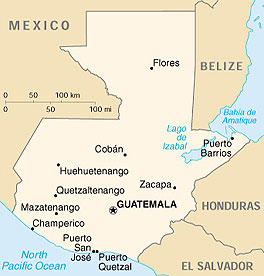 Guatemala is the most populous and the most industrialized country in Central America. It is also by far the country with the highest percentage of indigenous population. A New York Times editorial in the early 1980s said that during the last 30 years, no country in Latin America has suffered as much repression and human rights abuse as Guatemala. Sadly, a similar statement could still be made.

Guatemala was at the center of the great Mayan civilization that flourished from A.D. 300 to 900 and featured highly developed architecture, music, mathematics (including the use of the zero), a 365-day calendar, and an extensive trade network. The descendants of the Mayas offered resistance to the conquistadores for several decades after the initial invasion in 1524. During the colonial period Guatemala was an agricultural region in which the Mayan majority served the colonial estate owners. Until independence in 1821 Guatemala was the Spanish empire’s regional capital for all of Central America.

For most of its history Guatemala has been ruled by the military. A significant exception was the government of José Arévalo, elected in 1944, and his successor, Jacobo Árbenz. When Árbenz expropriated land from the huge United Fruit Co., the U.S. alleged Communist influence. A U.S.–backed invasion in 1954 by Guatemalan exiles toppled Árbenz, and the military rule that began then continued until 1985. The intense concentration of wealth and land has left the indigenous population and other rural poor almost totally disenfranchised. This is the principal cause of the civil war, which in 34 years has displaced three-quarters of a million and killed 100,000 civilians and 20,000 soldiers.

After the failed coup in 1994 by the elected president, Serrano, two elections were held: one to reform the constitution and one to elect a new congress. In both elections, 80 percent of the voters abstained. In this sense, the government is legal, but not legitimate. Only 12 percent of voters were affiliated with recognized political parties. The biggest single challenge Guatemalans face today is to control and conquer the “culture of impunity,” which protects the army, drug traffickers, corrupt officials, and other organized crime that debilitates the judiciary and executive branches.

Hope for an end to the war was reborn in March 1996 when the guerrillas declared an indefinite cease-fire, and for the first time a Guatemalan president sat down to talk with the armed opposition. Four main points still need to be resolved: land reform; the role of the army in a democratic society; constitutional reforms; and mechanisms for demobilizing combatants and reintegrating them into civilian society. 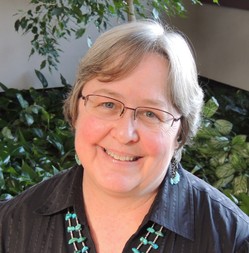 Leslie is a facilitator for CEDEPCA’s Intercultural Encounters Program; she is part of the team that receives visiting groups, plans and facilitates their educational program and itinerary, and interprets and leads reflection discussions.  North American church groups, theological seminarians, and college/university students who visit Guatemala hosted by CEDEPCA and Leslie are seeking to strengthen dialogue and cooperation among people, churches, and communities of various countries and cultures, to engage in mutual prayer and learning, and to unite with efforts to create societies that are peaceful, inclusive, equitable and just.  CEDEPCA, a long-time Presbyterian World Mission partner, has close ties with many presbyteries and Presbyterian congregations across the United States. CEDEPCA also offers pastoral, biblical, and theological education; offers programs in women’s empowerment; and provides ministry in times of natural and social disasters. You can read more about her work on her profile page, which can be found here.

Betsey is working as a facilitator for the Intercultural Encounters Program of the Protestant Center for Pastoral Studies in Central America (CEDEPCA). CEDEPCA provides North American church groups, theological seminarians, and college/university students the opportunity to discover Guatemala in all its diversity, beauty, and complexity, and to experience the everyday life of Guatemalans through immersion programs. Betsey is part of the team that receives visiting groups, plans and facilitates their educational program and itinerary, interprets, and leads reflection discussions. Eric has been a professional musician in the U.S., playing and teaching trumpet in the community and church and looks forward to using music as a way to connect with people in Guatemala. Eric will also serve in ministry in the home with the Moes’ three school-age children. You can read more about their ministry on their profile page, which can be found here

Eliane serves in as Facilitator for Women’s Leadership Development with the National Union of Presbyterian Women of the National Evangelical Presbyterian Church of Guatemala (IENPG). She seeks to empower women by facilitating development of their leadership skills and by helping to nurture relationships between the women of the National Union of Presbyterian Women in Guatemala and Presbyterian women in the United States. “Working with women in Guatemala gives me an opportunity to learn about them and the gifts they bring to ministry,” says Eliane. “Engaging in conversation with women, I listen to their struggles and offer hope in order to empower and strengthen them.” You can read more about her work on her profile page, which can be found here.

Founded in 1882, the IENPG was the first national church to result from Presbyterian mission work in Central America. The IENPG has one synod, composed of 6 Spanish-speaking and 11 indigenous-language presbyteries, and approximately 60,000 members. The IENPG’s Christian service program, Diaconia, works with presbyteries in development, health, and agricultural training. Women’s organizations address the needs and concerns of both indigenous and ladina women. Over the years the church has also been active in evangelism, including a mission to Honduras. For decades the IENPG has operated two schools, “La Patria” in Guatemala City and another school with the same name in Quetzaltenango.

The Evangelical Presbyterian Seminary in San Felipe emphasizes the Presbyterian/Reformed tradition in its training program for lay leaders and pastors. The Maya-Quiche Bible Institute at San Cristóbal and the Mam Center at San Juan Ostunalco were founded in the early years of mission work and remain good places for study and training.

In May of 1995 the IENPG contributed a martyr to the cause of democracy. Manuel Saquic, an indigenous Presbyterian pastor and president of the Kakchiquel Presbytery’s Human Rights Office, was killed by a death squad. The Human Rights Office threatens the power structure—which has enjoyed almost total immunity from prosecution—because it is a public forum where people can go to register complaints about rights abuses. Presbytery workers with the Human Rights Office give workshops in the countryside to teach people about their constitutional rights.

ALLIANCE OF PRESBYTERIAN AND REFORMED CHURCHES OF LATIN AMERICA (AIPRAL)

CEDEPCA is an independent ecumenical institution serving Central America’s churches. CEDEPCA encourages theological reflection and pastoral practice that is evangelical, contextual, liberating, and ecumenical. CEDEPCA has a number of outstanding programs within its four focus areas: Women’s Pastoral Program; Biblical, Theological, and Pastoral Training; Publications and Communications Training; and Communication and Exchange for Peace. As part of its Biblical, Theological and Pastoral Training Program, CEDEPCA administers the programs of the Latin America Biblical University in Guatemala at both the university and Bible institute levels. CEDEPCA has helped thousands of U.S. Presbyterians to understand the difficulties with which Latin American Christians live and to reflect on their own lives through the faith experiences of these brothers and sisters.

The Guatemala Mission Network is among more than 40 networks that connect Presbyterians who share a common mission interest. Most participants are involved in mission partnerships through congregations, presbyteries or synods. Network members come together to coordinate efforts, share best practices and develop strategies.

The Guatemala Mission Network is among more than 40 networks that connect Presbyterians who share a common mission interest. Most participants are involved in mission partnerships through congregations, presbyteries or synods. Network members come together to coordinate efforts, share best practices and develop strategies. 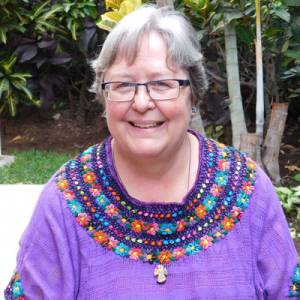