Racially charged violence in Charlottesville, Virginia, sent shockwaves of fear and grief across the United States on an August weekend last year.

Like many other Americans, Presbyterian pastor Jon Brown was distraught to the point of numbness, but on the following Monday morning his hope was renewed.

His spirits were lifted by dozens of elementary-aged children who had gathered for Peace Camp at the congregation he serves, Old Bergen Church in Jersey City, New Jersey. “To see children of different races, ethnicities and faith traditions singing, laughing and creating together was a powerful medicine for all of us in that moment,” he said.

The four-day event, which had been planned for months, drew nearly 100 children. It was sponsored by Christian congregations, a synagogue and a mosque in Jersey City, one of the most ethnically, racially and religiously diverse communities in the U.S.

Presbyterians from across the country, through their gifts to the Peace & Global Witness Offering, played a role in the camp’s success.

The neighborliness theme was developed with help from a curriculum published by the Presbyterian Peacemaking Program, a ministry that relies on Peace & Global Witness Offering gifts. The curriculum draws a connection to Mister Rogers’ Neighborhood, a PBS program that was created and hosted by the late Fred Rogers, a Presbyterian minister. 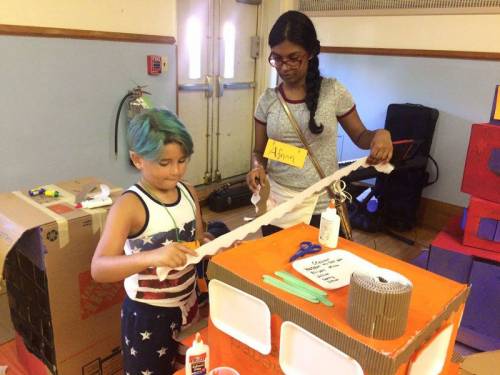 During Peace Camp, children from diverse backgrounds brainstormed about what is needed for a good neighborhood and built model neighborhoods out of carboard boxes and other materials. Photo provided

The idea for Peace Camp originated in an interfaith clergy group. Members had developed friendships and stood in solidarity against threats of violence against mosques and synagogues. “So, it only made sense that we instill that same sense of being good neighbors in this generation of children,” Brown said.

The children learned about ways to resolve conflicts and how to handle angry and sad feelings. They brainstormed about what is needed for a good neighborhood and built model neighborhoods out of cardboard boxes and other materials. They also learned about the elements of a virtuous neighborhood from people such as a police officer, librarian, teacher and public health official.

Brigid D’Souza, the parent of two campers and one of the camp’s adult leaders, called it “a really important gift” to her children and other campers.

“When I was growing up, I didn’t attend Bible study camp or any kind of camp like that, so for me it was really informing to see what this type of camp could mean for kids,” she said. Leaders of the event were so impressed by its results that they decided to repeat it this year.

Loving, gracious, holy God, thank you that in calling us you also equip and empower us to be your faithful witnesses wherever you may lead us. Please keep us faithful in your way of love. In Jesus’ name we pray. Amen.