Urges immigration advocates to ‘to stay steadfast in the struggle’ 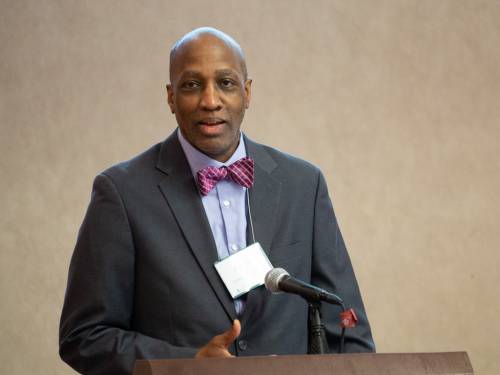 J. Herbert Nelson, II speaks at the April 25, 2018 meeting of the PMA Board in Cincinnati. (Photo by Gregg Brekke)

The Rev. Dr. J. Herbert Nelson, II, Stated Clerk of the Presbyterian Church (U.S.A.), issued a letter commemorating the anniversary of the dismantling of the Deferred Action for Childhood Arrivals (DACA) program. The longstanding immigration policy allowed children of undocumented migrants — also known as DREAMers— to remain in the United States under a process of bi-annual renewals.

Nelson urged advocates to “stay steadfast in the struggle, to keep demanding change, and to fight alongside one another to bring about more just answers.”

“Let us use this anniversary as a call to rise up again and be faithful to the One who calls for these times to seek justice,” he said.

More information is available from the PC(USA) Office of Immigration Issues. Nelson’s letter, which can be downloaded at this link, follows:

Commemorating the anniversary of the announcement of rescinding DACA

Through numerous administrations, our country has struggled to find an immigration policy that reflects the values of this country and the needs of others coming to this country. We understand that we are one body joined in Christ. [1] We are called God’s children even before being formed in the womb. [2] So, we strive to urge policy makers to create an immigration system that takes into consideration the humanitarian needs of our neighbors — newcomers and long-standing residents. We urge enforcement agencies to implement their directives in ways that also reflect humanity, dignity, and consider each individual case. We push for immigration courts to provide space for those who seek safety, security, and stability in this place and allow for due process for everyone. And yet, we fall short.

Today, on the anniversary of the rescinding of DACA, I am reminded of how this program was created to correct many of the wrongs in our immigration system for young people who were brought to the United States as children. It is not perfect, but it does provide accountability and possibility. DACA ensures enforcement agencies are considering humanitarian and family needs. It makes these agencies accountable for their actions. It also offers an opportunity for young people to continue their developmental journey in the United States. The establishment of this program was a hard-fought struggle led by the very young people it strives to protect. Yet, our government manipulates the narrative based on their interpretation of the law. But I ask you, to what end? What benefit does this country receive by sending hundreds of thousands of young people back into the shadows? How does the church benefit when our members are now scared, worried, and under constant alert? The faces of many DACA recipients I have had the privilege to meet this year flash before me. Thinking of them, I know we gain nothing through the decision to rescind DACA. The decision attacks certain parts of the body, and we need each other.

Therefore, I write to you encouraging you to stay steadfast in the struggle, to keep demanding change, and to fight alongside one another to bring about more just answers. As this struggle continues in the courts, we cannot turn our backs on other members of Christ’s body. We must be led by DREAMers who guide us in the walk to seek justice for their community. These are integral members in our communities, churches, schools, and work places. They make our country better. Let us use this anniversary as a call to rise up again and be faithful to the One who calls for these times to seek justice. “So, let us not grow weary in doing what is right, for we will reap at harvest time, if we do not give up.” [3] We can bring about change.