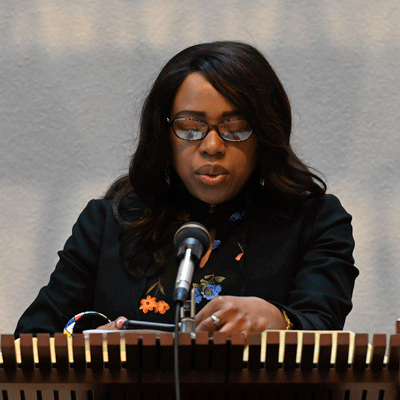 During her recent appearance as the guest on “A Matter of Faith: A Presby Podcast,” Margaret Mwale, Associate for Community Development and Constituent Relations for the Presbyterian Committee on the Self-Development of People, offered an SDOP definition for podcast hosts the Rev. Lee Catoe and Simon Doong.

SDOP, a ministry of the Presbyterian Church (U.S.A.) for more than 50 years, is all about self-determination, Mwale said, “the ability to self-determine and directly be in control of identifying means and possible working solutions to those needs in communities,” and also “addressing those needs in ways that increase [people’s] agency or power.”

“Self-development involves centering community residents’ voices to result in resident-led community change,” Mwale said on the podcast, which is available here. “SDOP’s mission includes participating in the empowerment of the economically poor, oppressed and disadvantaged people seeking to change the structures that perpetuate poverty, oppression and injustice. The word ‘empowerment’ was very much at the core when the Presbyterian Committee on the Self-Development of People was created, and it is to this very day.”

Mwale had some examples of organizations partnering with SDOP:

Jersey City Together in Jersey City, New Jersey, identifies and develops leaders to help deal with housing insecurity “and push for concrete improvements” in the enforcement of rent control and tenant protection laws, Mwale said. Right now, Mwale noted, “rent is through the roof in a lot of cities across the country.”

Strength to Love II in Baltimore is an urban farm worked by people who were formerly incarcerated. “They not only produce food for their need, they can sell extra food, addressing the issue of the food desert” that hampers the neighborhood, Mwale said. “People are the experts on their own challenges. They know better than those outside their communities what the issues are and what the best ways are to resolve them.”

Afghan Cattle Cooperative in Bristow, Virginia. The organization, made up primarily of refugees from Afghanistan, raises and sells cattle conforming with Halal requirements to improve the lives of families living below the poverty level. SDOP funding, provided by generous Presbyterians who give to the One Great Hour of Sharing Special Offering, helps cooperative members teach their children about animal husbandry and other life skills, Mwale said.

Those organizations “already knew what they wanted to do,” Doong pointed out. “They just needed that extra bit to help them get there and they were off to the races, maybe achieving things they didn’t even know they could have before.”

“I think that definitely speaks to the core of what Self-Development of People seeks to do and in essence what the church recognized decades ago what needed to be done,” Mwale said. “It was very much ahead of the curve.”

“We aren’t going to tie their funds to them doing specific projects that we want them to do,” Mwale said. “They’re looking at things from a long-term perspective in terms of eradicating generational poverty and structures and systems that keep people bound in poverty. … I think it’s pretty astonishing what some of these communities have been able to do through the years, sometimes with very little help.”

SDOP partners with organizations both at the national level, with grants at the level of about $50,000, and at the mid council level through micro grants ranging from $3,000 to $10,000. “That might not sound like a lot to some people,” Mwale said, “but it has been amazing the great uses to which organizations have put that money, advocating for themselves on matters relating to homelessness, senior citizens, youth-led initiatives, income-generating projects — all sorts of issues we have found through the years.”

Catoe called help that donors, churches and worshiping communities provide to ministries including SDOP a “both/and” situation. Places of worship do emergency short-term ministry “and this long-term deeper work. I hope people think deeper into the things you’re doing,” Catoe told Mwale. “Maybe your church has a soup kitchen and you’re asking, ‘Why? Why do you need to have a soup kitchen?’ Your community may have a food desert. Why is that? I think SDOP is a great resource to have in our denomination to facilitate asking those questions and walking alongside communities.”

Today’s Focus: Presbyterian Committee on the Self-Development of People

As you walked the streets in towns and villages, Jesus, your eyes were opened to the needs of those who had been left out. You touched the eyes that needed to be opened. You reached out to heal the hurts of the human heart. Give us courage to go where you lead. Amen.