‘The world is on fire’ 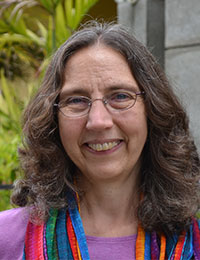 A recent virtual journey to Guatemala carried this title: “Confronting Climate Change with Actions of Hope.” The webinar, attended by more than 100 people, featured Bible study by The Rev. Dr. Karla Koll, a mission co-worker and professor of history, mission and religion at the Latin American Biblical University, an ecumenical institution in San Jose, Costa Rica.

CEDEPCA, a Guatemala City-based partner of the Presbyterian Church (U.S.A.), put on the 75-minute webinar. “We live in a beautiful complex planet God created, and it’s changing every day,” said Esvin Sirin, a member of CEDEPCA’s Intercultural Encounters team. “Central America has become one of the most vulnerable places in the world.”

“The world is on fire” but “we are not the first to feel the world was on fire,” Koll said to introduce the Bible study for the evening. “The first Christian communities were in fragile ecosystems along the Mediterranean Sea. Heat and fire were a constant danger.” Those early Christians “used symbols of fire and destruction to describe the social forces tearing apart their society.”

We may think of “apocalyptic” as being related to destruction, but in fact it means “revelation,” Koll said. “An apocalyptic vision is seeing beyond what is happening to the future God has for God’s Creation. The symbols were not meant to provoke fear; they were already living in fear. They nurtured the hope that God would act soon. God would reclaim God’s Creation.”

Koll asked webinar participants to look at one such apocalyptic piece of Scripture: 2 Peter 3:8–13, which includes these words: “But the day of the Lord will come like a thief, and then the heavens will pass away with a loud noise, and the elements will be dissolved with fire, and the earth and everything that is done on it will be disclosed.”

“I think the text communicates a longing for profound radical change — change that goes down to the elemental level,” Koll said. “The coming fire will be revelatory. All will see what the eyes of faith already see. Destruction is not the last word or the central point of this text. The forces of destruction will not triumph. A new heaven and new Earth are on their way,” which in this epistle reading “is a place where righteousness is at home.”

A photograph depicting the Volcan de Agua near Santa María de Jesús in Guatemala. (Photo by José Barrios via Unsplash)

“I think of righteousness as right relations — between people, between communities, between human beings and the rest of Creation,” Koll said. “They are relationships of interdependence and reciprocity.”

“Imagine what it would be to live that way,” Koll said. “It’s hard when we are surrounded by the forces of death — forces with which we find ourselves collaborating beyond our own will.”

In Central America, many Christians use the term “holiness” to mean “being set apart from the world,” Koll noted. But “to lead lives of holiness, we need to identify with those with whom God identifies.” Who did Jesus spend time with? Those people on the margins, Koll said. “Jesus said the coming reign of God would be good news for the poor. ‘Just as you did it to one of the least of these who are members of my family, you did it for me.’ … Holy lives are active lives, not passive lives. We are not called to wait with arms crossed while God’s ecosystems are destroyed.”

“The world is on fire, but this is not the end of our story … Our task then as we actively wait is to build righteousness a home, to right our relations,” Koll said. “For all of us, this means resistance to the predatory system that is destroying the ability to sustain life. With the help of Christ, we can live holy lives — even in the midst of climate change. May God bless us all.”

Sirin then introduced a video depicting people in Guatemala hit hard by climate change — and what’s being done to help people help themselves and their families. Programs include help with family gardens and a how-to on planting tree seedlings raised in greenhouses before they’re transplanted.

The Rev. Betsey Moe, a mission co-worker serving with CEDEPCA, summed up the webinar with this observation: “God is using each of us as participants in the new Creation.”

Thank you, Lord, for opportunities to share our gifts and learn from one another. Please give us the strength and courage to remain faithful to you while working hard to care for the rest of your children. We pray all this in your precious Son’s name. Amen.