The Parable of the 10 Bridesmaids, reimagined for the Zoom era

‘Keep it Light,’ written and produced by Presbyterian co-pastors, manages to do just that while providing thought-provoking content 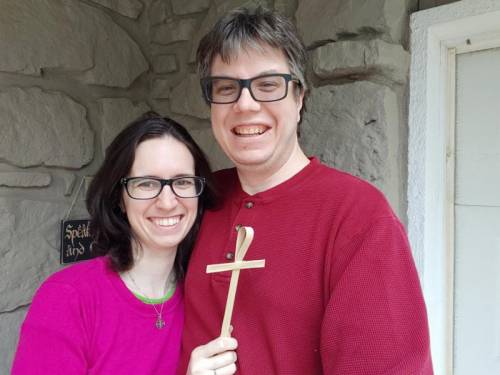 The Revs. Elana Keppel Levy and Lucus Levy Keppel met as students at Louisville Presbyterian Theological Seminary, where they were involved with a theater group. (Contributed photo)

An Oklahoma husband-and-wife pastor team uses a love for theater to share the Good News with the congregation, providing sermons as plays that often feature modern and humorous takes on biblical stories.

The Revs. Elana Keppel Levy and Lucus Levy Keppel recently took their creative gifts to a new level, with the help of a seminary professor and other pastors from across the country. “Keep it Light” is an 18-minute video retelling of the Parable of the 10 Bridesmaids, presented as a Zoom call between a wedding planner and the bridesmaids.

“Is someone singing ‘Time After Time’? Or am I 2,000 years too early?” asks one participant as the planning begins.

While keeping it light and humorous throughout, the production wrestles with serious biblical questions such as:

“We have to make the stories our own,” Elana Keppel Levy says.

Spoiler Alert: At the end, all are met with the grace and love of Jesus Christ, as the bridegroom assures those who were ultimately shut out of the wedding that they can repent and try again: “When you live in love, you abide in me and I in you. I am with you even to the end of the age – so keep awake, trust and believe.”

Since 2016, the co-pastors have served together at Trinity Presbyterian Church in Bixby, Oklahoma. They met at Louisville Presbyterian Theological Seminary, where they were involved in a theater group.

When Pastor Elana put out the casting call for “Keep it Light,” former classmates like the Rev. Susan Carter Wiggins were eager to sign up.

The bridesmaids in the parable are depicted in the play as virtues and vices, such as wrath, envy, kindness and diligence. Draped in pearls and other jewelry, Wiggins played the role of Greed.

“For me, and I’m sure it’s everybody, we all need some kind of diversion. This makes us smile,” said Wiggins, associate pastor for congregational care at Germantown Presbyterian Church in Tennessee. “Pastoring is hard anyway, but in the midst of the pandemic it’s really hard. With Elana and Lucus, knowing them, you knew they were going to create something good.”

After Pastor Elana wrote and distributed the script, each cast member sent in various takes and retakes. Pastor Lucus, the producer, spent three days and long nights putting all the pieces together to create the video. The cast even had a premiere night watch party to see the final version of its work.

Pastor Elana said one of the most gratifying comments she received after showing the video at the church in Bixby was that the play helped a parishioner think about sin and righteousness in a new way. The laughter brings added value to a message.

“That’s the thing about comedy,” she said. “Only the jester could tell the truth to the king.”

Added Pastor Lucus: “It harkens back to the origins of medieval theater and the way people learned. It was amazing how much theater made a difference in what you learned as you moved forward.”

The video and the entire script are available on Pastor Elana’s website, somuchbible.com, which offers numerous resources for preachers and worship leaders.

Rev. Matt Curry for the Synod of the Sun

O god, our help in ages past, our hope for years to come, thank you for the continued faithful witness. We ask that you continue to encourage and challenge us to accomplish your work. In the blessed name of Jesus. Amen.