An unused space becomes a place of prayer and connection

‘The church has left the building 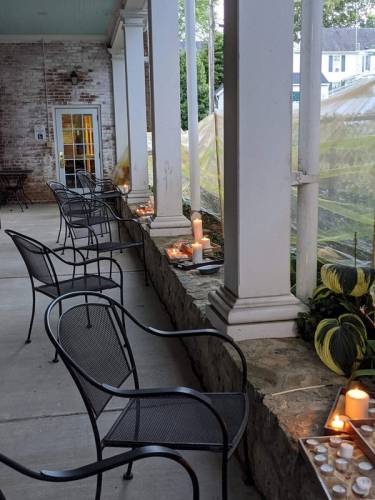 During the COVID-19 crisis, Lonce Bailey, a university professor and member of Shepherdstown Presbyterian Church in Shepherdstown, West Virginia, discovered that the church building really does matter to many people.

As a mission-minded congregation, Shepherdstown Presbyterians can be seen serving the community with T-shirts stating that “the church has left the building.” But when the coronavirus prevented people from gathering in the historic building, which once served as  a hospital during the Civil War, Bailey, along with several other members, because aware of a growing disconnectedness that had some feeling lonely and isolated.

Online worship was working well, with many logging on, he says, but the one thing that kept coming up was that people missed being in the physical building.

“While the building isn’t the church, it still holds an important place in the hearts of worshipers,” said Bailey. The quandary, though, was how to make the building safely accessible.

It was time to see with fresh eyes how spaces in the building, which were often ignored, could be used. Case in point was the portico alongside the church building that no one ever used.

With space for chairs in front of a knee-high stone wall surmounted by columns, it was the perfect place to invite people to come to church safely and pray while connecting with the building.

The portico was transformed into a sacred space with four candlelit prayer stations, all safely distanced, where people could come to meditate and light a candle. Soft music playing in the background added to the ambience. The prayer portico was available from 6 to 8 p.m. on Wednesdays and Sundays last fall.

Bailey said many were grateful for the opportunity to be reconnected to the building. He even noticed members, who were supporting the church’s take-out dinner mission, bringing the food back to the portico to eat and socialize safely with one another. The takeout dinner mission was a way to support Shepherdstown local restaurants, with the church announcing a different restaurant each week to frequent.

“We were able to re-imagine a space that was never used before, and it opened us to a new opportunity to be the church in a time of change,” said Bailey.

Today’s Focus: A place of prayer and connection

Heavenly Father, help us to keep our focus on you and on what we have in common through Jesus Christ. Keep our eyes on your mission, so that we will see what is possible and what is already happening when we work together. In Jesus’ name. Amen.