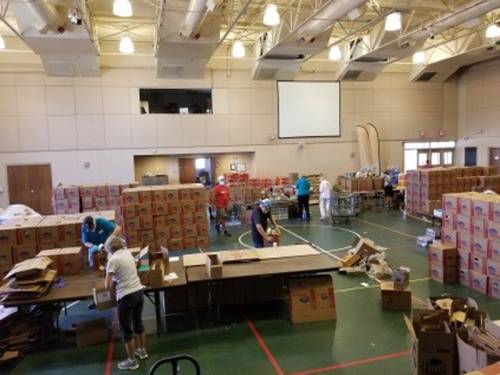 Volunteers put in thousands of hours to make sure Native American communities are fed during COVID-19. (Contributed photo)

In September 2019, the Synod of the Southwest and the Native American Ministries Coordinating Committee (NAMCC) held a successful gathering of the 29 Native American churches and chapels that are a part of the synod. A debriefing followed that gathering.

Ruling Elder Conrad M. Rocha, synod executive and Stated Clerk of the Synod of the Southwest, said, “The discussions centered around what should be the next steps in serving our Native American siblings based on the learnings taken from the gathering.”

Rocha says the NAMCC came back together in late January 2020 and determined to consider the ongoing support and validity of continuing key areas: the Native American Theocademy project and how it would be overseen by the NAMCC with the resignation of its main staff support, the synod’s Native American consultant; and follow-up with Native American siblings on the Doctrine of Discovery and its impact on Native American communities.

The group decided it would next meet in early April. But before the plan could be implemented the country came to a halt as a result of COVID-19. Native American communities were hit particularly hard.

According to Rocha’s report, in April, the Presbyterian Mission Agency Board met and at the behest of the Rev. Judith Wellington, a member of PMAB and the synod’s former Native American consultant, the PMAB considered whether it should “think about asking the ASG [the Administrative Services Group of the Presbyterian Church (U.S.A.), A Corporation] president and board to consider the reallocation of funds from the sale of the [Ghost Ranch] Santa Fe property in the Southwest … to support ministry among the Indigenous people of the Southwest, particularly in the way of funding internet services.” Following the Board’s discussion on the matter, the PMAB took the following action: “That communication be established with the Synod of the Southwest and its four presbyteries concerning this critical need immediately; and that the PMA president/executive director and senior staff identify and/or repurpose existing funds to be used for this serious matter.”

Originally, the synod and the NAMCC looked at using the funds to address the digital divide that exists in the Native community. However, the effort was cost prohibitive. The NAMCC members then concluded that given the disproportionate impact of COVID-19 on Indigenous people within the synod, addressing the issue of food insecurity was a better and more effective use of effort, time and money.

To address this urgent matter, the NAMCC, with input from leaders of the presbyteries of de Cristo and Grand Canyon, the Navajo Nation and the Laguna Pueblo submitted a grant proposal to the Presbyterian Mission Agency (PMA).

The proposal requested significant support to enable monthly food distributions to 200 Native American families throughout the synod, financial support to cover the cost of utilities for the Native American churches and chapels and financial support for the pastors and commissioned pastors serving those communities. The project would provide monthly support from July 2020 through December 2020.

Through Presbyterian Disaster Assistance, the PMA in less than 30 days processed and approved a $250,000 grant toward a project budget of $372,000. The Synod of the Southwest allocated $25,000 toward the project and the Presbytery of Grand Canyon sought and received a PDA grant of $25,000 for this purpose as well.