Diversity, unity, and hope are reflected in art 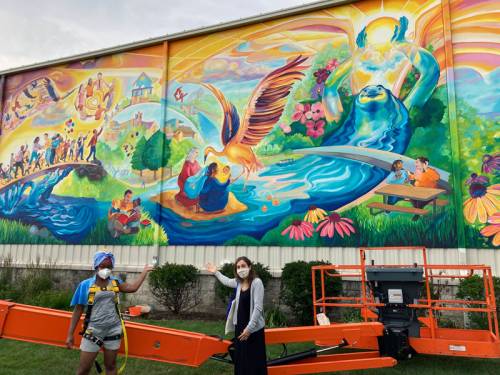 Mural artist Tia Chianti Richardson, left, and SecondFirst Church senior pastor the Rev. Rebecca White Newgren collaborated on a 1,700-square-foot community mural titled “Rockford Taking Flight.” Newgren said of the mural: “There are dreams in this wall, places where we have come from and where we hope to go.” Courtesy of SecondFirst Church

“Little did they know that they left us a blank canvas to shine and radiate out to the west side of Rockford,” said the Rev. Rebecca White Newgren, senior pastor of SecondFirst Church, speaking of the 1,700-square-foot, 55-panel mural that now fills the outside wall of the basketball gym. Called “Rockford Taking Flight,” the image reimagines the city breaking free of racial and class boundaries.

“We actually started talking about this a few years ago, thinking, ‘Wow, what could be on that wall?’” Newgren said. Once Richardson came on board to lead the project in spring 2018, the entire community was invited to dream of a Rockford future that people wanted to see, one that may be different than the present. More than 200 people from all over Rockford came together last October, November and December to create the background for the mural on public paint days, using a paint-by-number process. Due to colder temperatures during the painting phase, the panels were prepped and painted inside on the floor of the church. Some panels for the mural also went on the road to the Jubilee Center, a day center for adults living with mental illness; Christ the Rock Preschool; and Northwest Community Center, to make it convenient for people of all ages and all areas of the city to participate.

Richardson said she was moved by the raw joy that people had just to be able to paint on the separate panels that traveled to their locations. “Just because they wanted to be a part of something this big,” Richardson said. “It didn’t matter to them that the panels were not altogether. They didn’t care that they were painting pieces from someplace in town maybe they’d never been to. Nobody questioned that fact. So, that enthusiasm to be part of something really says something to me.”

The mural, Richardson said, is about life. “We all have the same needs in life: to feel joy, to party, to celebrate, to belong and to participate in something bigger. It’s that raw life moving through us as human beings that I believe is the most precious commodity we have,” she said, “because that’s where our potential to create something from nothing comes from.”

Newgren said that the project was funded through a six-week community Kickstarter campaign that raised $15,000 in support from more than 100 donors, plus a matching gift from Rockford community arts supporter and businesswoman LoRayne Logan.

The project also received support from community businesses and local artists, some hobbyists and some professionals who gave a great deal of time over the past year to help Richardson with finishing touches on the mural.

“There are dreams in this wall, places where we have come from and where we hope to go,” Newgren said.

Richardson recognized that people wanted her to see their city the way they see it — parts that are isolated and other parts that are doing well. Richardson said the process of creating the mural offered people from all walks of life the chance to acknowledge community challenges (represented by dark clouds on the far left of the mural) and to think of ways to make those better (such as people working together, helping and supporting one another).

Watching the spirit of collaboration take flight, Richardson said, is what was special to her about this project, this miracle of flight that had “arms and legs and hands and more than 200 heads and hearts. In the mural, that collective spirit can be seen in the stork, delivering Rockford’s future in the form of a baby — the miracle of new life, the hope in the potential of new possibilities.”