Teens now ask what they can do to help farmworkers 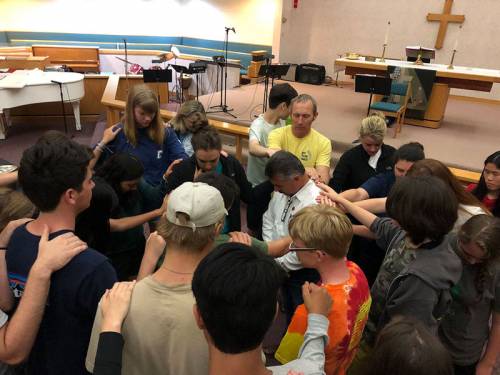 The Lafayette-Orinda Presbyterian Church youth pray with an organizer from United Farmworkers. The teens ventured beyond their community to hear firsthand the stories of the injustices farmworkers experience. Keris Dahlkamp

Before the pandemic hit, high schoolers from the Lafayette- Orinda Presbyterian Church youth group in Lafayette, California, would spend a week of their summer serving a community in need. In July 2019, they went to the community of Salinas, about 100 miles from Lafayette. Some teens in the group were less than enthused. That quickly changed once they arrived.

The youth served in food banks, a homeless shelter and an organic farm. They also assisted in summer school programs for children of migrant farmworkers. Each encounter the youth had deepened a connection and love for a community — and people — that they typically did not meet, bringing them face to face with those Jesus was talking about in Matthew 25 when he mentioned giving water to the thirsty and setting free those imprisoned.

Despite the experiences that the youth group had that opened their eyes to the advocacy work that needed to be done, the residents of Salinas still experience many challenges. Similar to the outcries from the Black Lives Matter movement and its allies, farmworkers and their families often face racial injustice in the form of inadequate education, infrastructure and even threats of deportation.

But in Salinas, and throughout many other parts of California’s central valley, the Lafayette-Orinda Presbyterian youth also learned that communities of color also face another injustice — environmental.

Amanda Young, a Lafayette-Orinda senior who participated in the 2019 trip, said, “While the fields were pretty to look at, there’s no doubt in my mind that they contain dangerous pesticides that harm the farmworkers and those who live nearby.”

Much of the life of a farmworker revolves around the care and cultivation of crops. On factory farms, this means that many farmworkers are exposed to harmful pesticides. Pesticides flow into the river systems or are swept up in chemical drifts as the daily winds pick up. Pesticides cause added harm to the elderly, sick and children.

According to UC Berkeley’s Center for the Health Assessment of Mothers and Children of Salinas, heightened rates of ADHD, asthma and other long-term problems are prevalent in the children of Salinas due to their exposure.

Oscar Ramos, a teacher at Sherwood Elementary School in Salinas who partnered with Lafayette-Orinda Presbyterian, said the fieldworkers “are threatened a lot; either you take the job, or you get out. They are not told about the types of pesticides that are used or the side effects of those pesticides.”

Ramos, who worked in the fields with his family as a boy, said that farmworkers often do not get briefed by farm owners on how to keep their families safe from the residues that stay on their clothes and hands.

For example, washing work clothes separate from children’s clothes, taking a shower before hugging and leaving shoes outside all help prevent exposure.

Chemicals such as chlorpyrifos, along with oil leaked into streams from nearby drilling at the San Ardo Oil Field, can and will harm the environment along the Salinas River. The river feeds into the working-class cities of San Lucas, King City, Greenfield, Soledad, Gonzales, Spreckels and Salinas.

Local elementary school children and adult residents spoke with the Lafayette-Orinda Presbyterian youth team about the importance of advocating for the people experiencing this kind of systemic racism, raising questions for the youth such as: What is the duty of people of faith when presented with such issues of environmental injustice? And, what role might congregations play in advocating for marginalized communities that are not their own?

“I have always been taught that God wants us to love all of our neighbors and that we should also acknowledge all of the amazing things God has created on earth. It’s important that we remember both of these things because the poor, under-represented people of the world are the ones who have unfairly experienced the gravest effects of climate change and environmental injustice,” said Young.

The Lafayette-Orinda Presbyterian youth are eager to visit the community of Salinas again.

They are especially eager now that they have firsthand knowledge of how the food that feeds so many is grown — the conditions farmers work in, the hands that dig into the soil and the families impacted by the use of chemicals.

Gracious God, we hear your call to love our neighbors, and we know that you intend for us to care for both their physical and their spiritual needs. Help us to respond to this hungry, thirsty world with love that pours from river of living water that you have placed in the hearts of those who believe. In the name of Jesus Christ, who is living water for our bodies and our souls. Amen.