‘Without a thought for self’

As Jesus prepared to voluntarily sacrifice his life that we might have life, he said to the disciples, “No one has greater love than this — that one lays down his life for his friends.” Following the example of Jesus, many others have given their lives in their service in God’s kingdom. 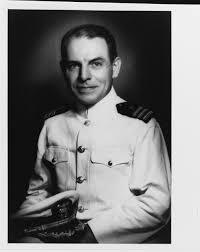 Among these servants of Christ is chaplain George S. Rentz, United States Navy. Rentz was born July 25, 1882, in Lebanon, Pennsylvania. He attended Princeton Theological Seminary and was ordained in 1909. After ordination he served churches in Pennsylvania as a member of the Presbytery of Northumberland. Sensing the call of God, Rentz joined the Navy, becoming a chaplain assigned with Marines in World War I.

After the war, Rentz stayed on, eventually becoming the chaplain assigned to the USS Houston in 1942. There he served faithfully. One officer noted, “When the sailors saw this man of God walking fearlessly among them, they no longer felt alone.”

On a February night, the Houston came under attack in the Battle of Sunda Strait. Of the 1,061 aboard, only 368 survived the sinking. Rentz gave his life that evening, surrendering his life jacket to a seaman.

For his actions, Rentz was awarded the Navy Cross, the only Navy chaplain so honored.

A survivor of the Houston, Lloyd Willey, became a prisoner of war. After Willey’s liberation and return to the U.S., he penned a poem giving tribute to Rentz, who so modeled Christ to those he served. The poem included the following stanzas:

A sailor at his side clinging to the raft
was wounded and strength was ebbing fast.
Having no life belt to keep afloat,
his chance of survival was indeed remote.
Without a thought for self, but with careful haste
the chaplain fitted his life belt to the sailor’s waist.

The hours passed, and come dawn,
the sailor was safe, but the chaplain was gone.
He had followed the law of the apostles’ creed,
his life, the price of a noble deed.

Today, on Rentz’s birthday, may we be inspired and guided by his ministry and his devotion in being Christ to those in need.