‘Who listens to radio anymore, anyway?’ 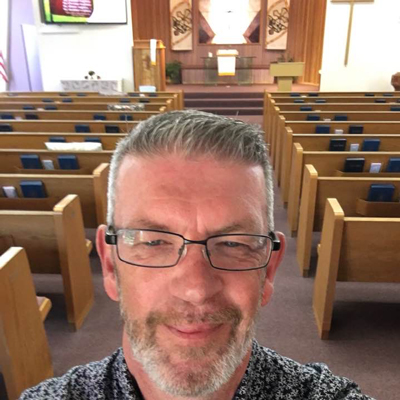 When Stonewall Ministries decided to use money received from the Presbytery of Riverside to purchase radio ads on KGAY, the Pride of the Valley, Nathan Sobers had no idea that soon he’d have a weekly show exploring spirituality and social justice.

The organizing pastor of Stonewall Ministries in Cathedral City, California, one of the Presbyterian Church (U.S.A.)’s

Laughing, Sobers told them that while their point was valid, the majority of gay people in the area were in their 40s and 50s and even older — and that they did in fact still listen to the radio.

“And about half of the residents here over 55 identify as LGBTQ+,” Sobers said.

With that, Stonewall decided to buy radio ads on a trial basis in 2019.  At first, when Stonewall’s messages began running in May, not much happened. A few new people came to worship at Stonewall, saying they’d heard the ads, and Sobers was getting anecdotal feedback that the ads might be working.

On Dec. 1, 2019, Johnson, a professing Christian and KGAY’s morning host, decided to worship at Stonewall. Coincidentally it was World AIDS Day. The service meant so much to him that he started talking about it the next morning on his radio show.

He also reached out to Sobers and scheduled an interview for the second week of December to talk about it.

“It was new for me,” Sobers said. “I didn’t make that big of an impression.”

But Johnson, who considers Sobers his pastor now, kept reaching out to him for spiritual support. In January, he asked Sobers to do another interview to promote Stonewall Ministries’ upcoming Blessings Bags project. As Sobers invited listeners to join them in blessing people experiencing homelessness with bags of water, snacks, hygiene products and socks, radio station personnel were impressed.

KGAY decided to have monthly conversations with Sobers about spirituality and faith. And when the coronavirus hit, followed by George Floyd’s death, it quickly evolved into bi-monthly — and now weekly — conversations.

“We started out specifically talking about spirituality,” Sobers said. “But now we have conversations about social justice and the gospel.”

More and more people in the community are interested in what the pastor on the radio has to say. Since the conversations on the radio started, Stonewall has seen a 48% increase in worship attendance.

And Sobers is having quality conversations with people about faith and their spiritual lives on the back patio of the local gay bar.

“One of the most interesting and satisfying results is that I’ve become the unofficial chaplain to not only the staff at the radio station, but the local drag community,” Sobers said. “Our mission at Stonewall is healing wounds. So many of us in the LGBTQ+ community were either kicked out of or left the church over our sexual orientation or gender expression.”

Eternal and loving God, in the midst of a world of relentless change, grant us a deep and abiding sense of your sovereign power and abiding presence in our lives. May we walk to the way you have set before us in confidence, in hope and in faithfulness to our calling in Christ Jesus our Lord. Amen.