Both midwife and hospice chaplain

Frank Yamada, director of the Association of Theological Schools, says he thrives on change 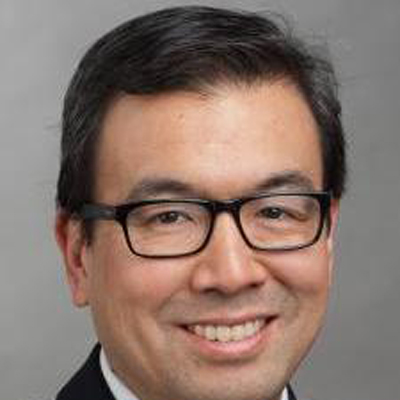 As a member of Generation X and the person who runs an organization helping seminaries provide great theological education, the Rev. Dr. Frank Yamada said he sees himself as someone who’s present during both the first and last breaths of ministry — as both midwife and hospice chaplain.

“On the hospice side, it’s allowing someone to transfer with grace and gratitude into another state of life,” Yamada, executive director of the Association of Theological Schools and the former president of McCormick Theological Seminary, said during a recent Facebook Live event hosted by the Rev. Dr. Lee Hinson-Hasty, senior director of Theological Funds Development for the Presbyterian Foundation’s Theological Education Fund. “As a midwife, it’s supporting something new in that liminal space between life and death, and that’s birth.

“Meaningful change,” he said, “is an embodiment of what’s going on in theological education. … Because of COVID-19, it’s a place where I feel alive, this area of change. Even sheltering in place, you see this new normal.”

Asked about his conversion to Christianity as a teenager, Yamada told Hinson-Hasty “conversion may not be a good Reformed word, necessarily,” but “conversion keeps on happening. It’s about you catching up to what God is already doing in your life. The Church needs to catch up to the work of the Holy Spirit.”

“It is not human for us to be excited about change,” Hinson-Hasty responded. “People are anxious about how change is occurring at this time. I want to put on your glasses to see and discern to notice what the Holy Spirit is up to.”

When he became McCormick Theological Seminary president, Yamada, the first Asian American to head a PC(USA) seminary, identified three “vectors of change” he said were coming to theological education. The first was diversity.

The second vector of change he identified in that address nine years ago was technology. “Here we are having a remote conversation,” he told Hinson-Hasty, “but there is nothing virtual about it. It’s real, but it’s remote. Digital technology has exploded at ATS schools, especially beginning this spring, and that shift is in full force.”

The third vector of change is a generational shift, “allowing millennials to lead us,” Yamada said. “I think we are seeing that in many different ways — leading the church, on the streets in protest … how they lead in government and in theological schools. I thought I was preaching to the choir,” Yamada said of the address he made at a Chicago church in 2011. “I thought (those changes) were inevitable.”

For most of its 101-year history, ATS was an organization of mostly mainline seminaries, Yamada said. Now it’s about 44% evangelical, 33% mainline and 22% Roman Catholic. While the Master of Divinity is still the most popular degree sought, the Master of Arts degree is the fastest-growing, he said.

“A number of traditions don’t require an MDiv,” Yamada said. “A growing number of students are already ordained, and the education is a companion to their already-serving ministries.”

The student make-up being trained theologically has changed dramatically, Yamada said. As recently as the last century, most students in ATS member schools were white males seeking an MDiv while living residentially at a mainline Protestant institution. Most were attending a seminary within their denomination and would be going on to serve a congregation of that same denomination.

“Now,” he said, “almost every one of those categories has changed.”

As is his custom with these Facebook Live events, Hinson-Hasty asked his guest to deliver a benediction.

“As we go forth into this new world shaped by many challenges and things we haven’t encountered before, the twin pandemics of COVID-19 and systemic racism, may we live faithfully into the call God has put before us,” Yamada said, encouraging listeners to “be agents of that change, transformation and conversion.” He invoked God’s presence “to be among us, knowing that your presence is not virtual, but that which sustains us and gives us life.”

Lord, strengthen, guide and bless us as we labor together to bring your love to those who need it most. We thank you for those who serve. May their obedient efforts continue to bear fruit in the lives of many. In your name we pray. Amen.