Even a pandemic can’t squelch one church’s creative impulse 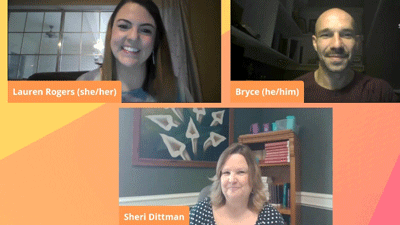 “The pandemic knocked the wind out of our sails for a little while,” Dittman told Special Offerings’ Bryce Wiebe and Lauren Rogers during a near 30-minute version of Between Two Pulpits posted here on the Special Offerings’ Facebook page. “But not for long.”

It turns out the winning team included a Border Patrol agent, who found the horse included on his scavenger hunt list “in no time flat,” Dittman said. “I had no idea there was a horse so close to our church, but he knew.”

During a wide-ranging conversation, Dittman also discussed her current sermon series on the Apostles’ Creed, which she’s exploring along with worshipers line by line.

“This congregation loves the Apostles’ Creed,” she said. The church, which is where Dittman grew up, was founded in 1850, “and I guarantee we have used that creed almost every Sunday.” It can be a perilous step to insert the Brief Statement of Faith or The Confession of 1967 into any given Sunday’s liturgy, she said with a laugh.

“The Apostles’ Creed is very comforting to people, so I thought, let’s study it in detail,” Dittman said. “I’m hoping that will encourage Bible studies later on so we can go in depth.”

Dittman said she would be preaching on the line in the Apostles’ Creed, “I believe in the holy catholic church.” She’ll be working to get beyond the notion that “catholic” here means “the church worldwide” or “universal.”

“It’s more than that,” she told Wiebe and Rogers. “Even Presbyterians are competitive — you know that. We are the body of Christ together.”

Her text is John’s take on the feeding of the 5,000, from which Dittman derives this lesson: “All we do is through a lens of love.”

Then she wonders: Whatever happened to the 12 baskets of leftovers?

“Everyone was filled. They got what they needed, and there was more left over,” Dittman said. “What do we do with the more that is left over? What if we don’t have the more that was left over? Are we not the church? What’s left in our basket?”

Dittman said she hesitates to “give all the answers to the congregation. I want them to come up with what are their gifts, and what can we do with our leftovers?”

Dittman answered the traditional final question for Between Two Pulpits — what is your hope for the future of the Church? — this way:

“My obvious prayer for the Church,” Dittman said, indicating she was referencing the “big ‘C’ Church, “is that we are together in Christ and there is not this separation,” that we don’t look at each other as ‘the other.’”

“Living here on the border, it’s very easy for us to get lost down here, because we are so far away from anything. … It’s a misconception that people are flooding the border. We are all God’s creatures, and we need to look at each other through the lens of love. That is my hope for the Church.”