‘Take Me to the Alley’ 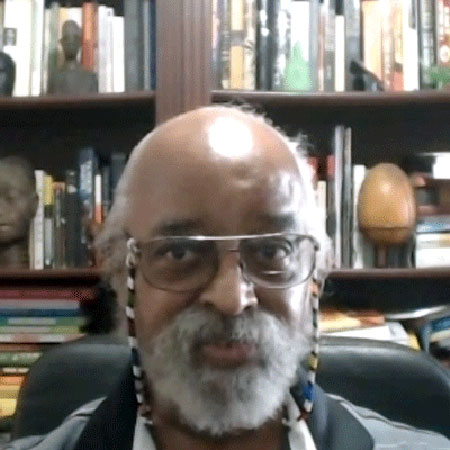 Ruling Elder James Parks of Baltimore is a member of the Presbyterian Mission Agency Board. (Screenshot)

Ruling Elder James Parks of Baltimore, a member of the Presbyterian Mission Agency Board who cut his teeth on community organizing, opened his devotional time with the board recently by playing the clip of Gregory Porter’s “Take Me to the Alley.” Porter’s poignant song includes these lyrics:

“Well, they guild their houses
In preparation for the King
And they line the sidewalks
With every sort of shiny thing
They will be surprised
When they hear him say

Alleys, Parks pointed out, are places “where rats, muggers, the homeless and dangers hang out. Or it’s a throwaway place. As I read my Bible, Jesus spent a lot of time with people pushed into the dark alleys of life.”

According to Parks, Porter’s song is based on an experience he had as an 8-year-old growing up in Bakersfield, California.

On one 110-degree day, Porter and his mother were riding with Porter’s brother, who’d recently purchased a Cadillac Eldorado. Porter’s mother spotted a smallish man passed out and lying on the pavement. The man, Parks noted, had soiled himself and was on pavement very hot to the touch.

The mother picked the man up, cleaned him off, placed him in the front seat of the Cadillac and ordered Porter’s brother to drive him to their house, where she sobered the man up and gave him some of Gregory’s clothes to wear. The man stayed with the family for a couple of weeks.

“Gregory was angry,” Parks said. “It took him a long time to realize she was teaching him a lesson,” and, as it turned out, giving her son a song to write decades later.

Clearly, Porter’s mother acted on loving instinct. The kind of due diligence that Presbyterians and others normally exercise while decision-making “is a useful tool, as long it doesn’t lead to paralysis by analysis,” Parks said.

“It is past time as a church to live our faith,” Parks told his fellow board members. If Gregory’s mother had done her due diligence assessing the situation that hot day in Bakersfield, she might have come up with a different way to help, Parks said.

“Our job,” Parks told the board and the others gathered for the online meeting, “is to get our hands dirty, to go into the back alleys, and God will do the rest.”

With the world reeling “in the middle of a perfect storm” of pandemic and racial reckoning, “we cannot, we must not be silent. We must reach out to people we don’t know, don’t like and feel repelled by.”

Jesus, Parks said, “calls us to empty our pews, go out into the alleys, and love whoever we find there.”

Even followers of Christ will be surprised, Parks said, when they hear him say, “take me to the alley.”

Today’s Focus: ‘Take Me to the Alley’ song

You are a God who cares about the hungry, the sick, the neglected, the prodigal. Help us to see through your eyes so that when we share of our abundance, the lives you are about are changed for the good. Thank you for your love that crosses all boundaries. Amen.