Giving generously in their golden years 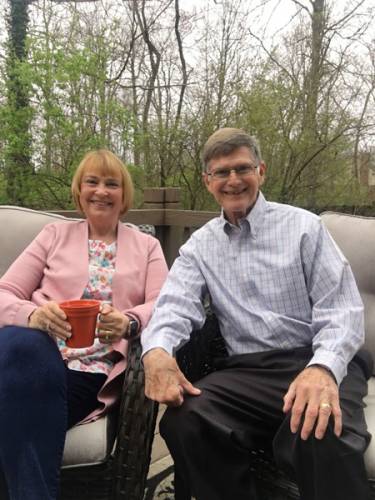 Retired Christian educator Emma Sue Davenport and her husband, the Rev. Dennis Davenport, said they turned to the Presbyterian Giving Catalog “as a true gift of thanksgiving for what God has done.” (Contributed photo)

Behind the admittedly corny saying that graces many a collectable coffee mug, “Ministers never retire, but are simply put out to pastor,” there lies a grain of truth — retiring church workers face some very real challenges.

Or so the Rev. Dennis Davenport and his Christian educator wife, Emma Sue, recently discovered.

“I retired from Eastminster Presbyterian Church in Evansville (Indiana) in March 2019 after serving there for just over 27 years,” Dennis Davenport recalled.

“Within a month, we moved to Indianapolis where two of our three sons live, and where we discovered the truth of something I’d always been told. One of the most difficult adjustments in moving is finding a church home. That’s especially true for ministers, isn’t it? We visited several churches and never felt completely settled; and then COVID hit and made it that much more difficult.”

And, for the Davenports, their challenge wasn’t just a question of feeling at home in a new congregation. It was also very much about honoring their tithe.

“Although we always contributed financially to the different churches we visited through our tithe and various mission projects,” added Dennis, “now that we’re not visiting churches in person during the pandemic, we had to get creative.”

Already longtime advocates for the One Great Hour of Sharing and the Presbyterian Giving Catalog, the Davenports didn’t have to look far to find Presbyterian mission opportunities that they could support.

“Whenever we received the giving catalogs in the past, it seemed that we were always in the midst of paying college tuitions or meeting some other financial obligations,” said Emma Sue, “but God opened an opportunity for us that was kind of thrilling to me. Because Advent was coming, and we were trying to make it special during the pandemic to reinforce the message that God is still with us — that we still have purpose — we turned to the catalog as a true gift of thanksgiving for what God has done. We saw it in a new way.”

The Presbyterian Giving Catalog — which is available both in print and online — is filled with a wide variety of gifts that provide real and positive impact around the world, including aid for refugees, access to clean water and ways to end hunger.

As their giving project began to take shape, the Davenports found that they had never had so much fun.

“We really enjoyed the idea of supporting things that we could then give as a Thanksgiving gift to our sons, daughters-in-law and grandchildren,” said Dennis, who, with Emma Sue, gave through the Presbyterian Giving Catalog for the first time in 2020. “Emma Sue spent days pondering over each gift. God has blessed us.”

In selecting the gifts, they looked for a personal connection between the catalog items and each family member’s past, present and future.

“To have people you know choose a gift for you makes it that much more prolific and meaningful,” said Emma Sue.

O God, each of us is your unique creation. Help us to recognize and respect this uniqueness in each child and individual. We pray for children who are poor, malnourished, neglected and abused. Help us to reassure each of your children and praise you when they embrace what matters in God’s house. Amen.