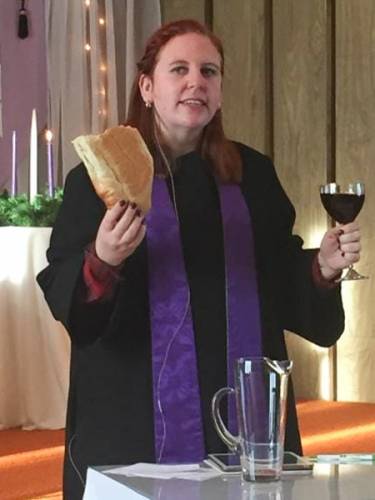 As her college graduation approached, Maggie Lewis remembers feeling that God was calling her to be a missionary in Africa. She didn’t know exactly how to make that happen, so she decided to do some research.

“I went to the computer lab and started Googling ‘missionary in Africa,’ and that’s when the Young Adult Volunteer program popped up,” said Lewis, who grew up in the Presbyterian Church (U.S.A.). She initially thought she’d apply to serve as a YAV in Africa or Northern Ireland or Nashville, Tennessee, all of which were among the available YAV sites that year.

While home in California during a break from school, Lewis remembers thinking, “Let me look one more time at all the sites and just make sure that I didn’t miss something.” That’s when she saw “Chinook, Montana” had been added to the list. She interviewed with staff from three YAV sites and ended up choosing Chinook.

Lewis and two other YAVs were placed at the Chinook site, but a couple months before YAV orientation, the other two young people gave up their spots for one reason or another. At around one month before orientation, Lewis received a call from the national YAV office, suggesting that she might consider going to New Orleans instead of serving alone at Chinook, a first-year YAV site and the most rural of all YAV sites.

“I’m not one that really advocates for myself in this way, but I said, ‘No, I really want to go to Chinook.’ I just felt this strong sense of call,” Lewis explained.

She ended up being the first and only YAV at the Chinook site during its first year, 2012–13.

“Once I got to Chinook, I just loved that it was such a community,” Lewis said. “Really, the whole town is the YAV site. I lived with a Presbyterian pastor and her family. The people all welcomed me and included me in things. I saw the same people in the pews on Sunday that I worked with in my placements during the week and saw at the basketball game on Friday night.”

After growing up in an urban environment, having a rural experience was a draw for Lewis, she said. “This is a town of 1,200 and I grew up in the San Francisco Bay Area,” Lewis said. “I didn’t even know at that time what ‘small town’ meant. Really, for me, it was immersing myself in something entirely different.”

In 2018, six years after Lewis’ YAV year in Chinook, about 70 congregants, church officials, friends and family gathered at Chinook Presbyterian Church to celebrate the ordination of the Rev. Maggie Lewis as a minister of Word and Sacrament in Glacier Presbytery of the Presbyterian Church (U.S.A.), and to install her as pastor for Chinook and Havre Presbyterian churches.

Lewis also serves as chairperson of the YAV Board in Chinook and works closely with the Rev. Jack Mattingly, YAV site coordinator. They both interview prospective YAVs to determine if Chinook is a good fit. YAVs who are placed in Chinook, two or three each year, are housed in a homestay model, living with families who are a resource in getting acquainted with the community and its people. Mattingly is pastor of the Chinook United Methodist Church and Harlem Yoked Parish, a congregation of the United Methodist Church and the PC(USA) in Harlem, Montana.

What do Chinook YAVs do? The opportunities are varied, Lewis said. Some tutor and assist in classrooms at an elementary school. Some have helped with an ecumenical youth group and accompanied the group on mission trips. Others have served at the local library or food pantry. Some lead Bible studies at a nursing home or bond with residents of a senior living apartments, whom they adopt as grandmas and grandpas.

If YAVs have particular gifts, the site coordinator and board work together to find placements that work well with their strengths. The Chinook YAV site has many different denominations working together. The YAVs are encouraged to have a Presbyterian church as their home church, but they also have opportunities to worship in all the other churches.

O God of mercy, grant us the faith and courage to proclaim the gospel of your Son, Jesus Christ. Anoint the new believers with your grace, that they may experience the abundance of life found only in you, to the glory of your holy name. Amen.